Baltimore Sun Slams President Trump After Attacks: 'Better to Have a Few Rats Than to Be One'

Following President Donald Trump’s Saturday morning attacks on Democratic Rep. Elijah Cummings’s Maryland congressional district, in which he called the area “disgusting,” the Baltimore Sun‘s editorial board struck back on Saturday with a furious editorial.

“[Trump] was returning to an old standby of attacking an African American lawmaker from a majority-black district on the most emotional and bigoted of arguments,” the editorial board of the 182-year-old paper wrote. “It was only surprising that there wasn’t room for a few classic phrases like ‘you people’ or ‘welfare queens’ or ‘crime-ridden ghettos’ or a suggestion that the congressman ‘go back’ to where he came from.”

The paper was responding to a series of attacks by Trump against Democratic Rep. Elijah Cummings, the House Oversight Committee chairman, and the congressional district he represents. The President’s latest insults against a congressperson and their district come two weeks after he tweeted racist comments targeting four congresswomen of color, prompting nationwide outrage.

“[Cummings’s district] is considered the worst run and most dangerous anywhere in the United States,” the President tweeted on Saturday. “No human being would want to live there.”

In a subsequent tweet, Trump called the district “a disgusting, rat and rodent infested mess.”

Trump’s insults against the district apparently came in response to Cummings’ public castigation of high-ranking Homeland Security officials earlier this month, over the living conditions of migrants being detained at the US-Mexico border. Cummings, 68, who has represented Maryland’s 7th congressional district since 1996, is also heading up multiple investigations on the President.

Rep. Cummings responded on Twitter on Saturday to the latest attacks. “Mr. President, I go home to my district daily. Each morning, I wake up, and I go and fight for my neighbors,” the congressman said. “It is my constitutional duty to conduct oversight of the Executive Branch. But, it is my moral duty to fight for my constituents.”

Baltimore’s paper went further in responding to the President’s attacks on Cummings’s Baltimore-area district, which is majority-African American.

“Mr. Trump sees attacking African American members of Congress as good politics, as it both warms the cockles of the white supremacists who love him and causes so many of the thoughtful people who don’t to scream,” the Sun‘s editorial board wrote.

The paper went on to state that Trump, as President, has more power to affect the city of Baltimore than any single congressperson, and that he also holds responsibility for addressing the city’s challenges.

“[Trump is] still not fooling most Americans into believing he’s even slightly competent in his current post. Or that he possesses a scintilla of integrity,” the Sun concluded. “Better to have some vermin living in your neighborhood than to be one.”

The Sun‘s editorial was far from the only response to Trump’s comments. On Saturday, CNN anchor Victor Blackwell, who hails from Baltimore, delivered a emotional repudiation of the President’s characterization of the city where he was raised.

“The President says about Congressman Cummings’s district that no human would want to live there,” the anchor said with a long pause in which he became visibly emotional.

“You know who did, Mr President? I did,” Blackwell went on. “From the day I was brought home from the hospital to the day I left for college… I don’t want to sound self-righteous, but people get up and go to work there. They care for their families there. They love their children, who pledge allegiance to the flag, just like people who live in districts of congressmen who support you, sir. They are Americans, too.”

Other Democrats in Congress responded to the President’s attacks as well.

“@RepCummings is a champion in the Congress and the country for civil rights and economic justice, a beloved leader in Baltimore, and deeply valued colleague,” wrote Representative Nancy Pelosi on Saturday. “We all reject racist attacks against him and support his steadfast leadership.”

Baltimore Mayor Bernard C. “Jack” Young came out swinging for Rep. Cummings as well. “It’s completely unacceptable for the political leader of our country to denigrate a vibrant American city like Baltimore, and to viciously attack U.S. Representative Elijah Cummings a patriot and a hero,” the mayor wrote in a statement.

Republicans have had a muted response to Trump’s attacks on Cummings’ district. Texas Rep. Will Hurd, who had spoken out against Trump’s tweets on the congresswomen of color, on Sunday said he “wouldn’t be tweeting this way.”

Maryland’s Republican Lt. Gov. Boyd Rutherford tweeted in response to Trump’s recent attacks that he hopes the “criticism is not directed at the many good and hard-working people who live in the district. 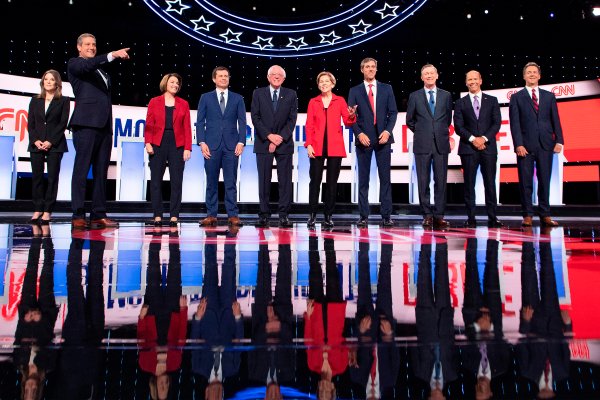 Highlights from Night One of the Second Democratic Debate
Next Up: Editor's Pick