People Are Boycotting the Super Bowl to Support Colin Kaepernick

Although millions of Americans are tuning in Sunday night to watch the New England Patriots play the Los Angeles Rams in Super Bowl 53, others took to Twitter to announce that they’re skipping the game to support former NFL quarterback and social justice activist Colin Kaepernick.

Kaepernick has been an icon of the contemporary civil rights movement since 2016, when he declined to stand for the national anthem because he could not “show pride in a flag for a country that oppresses Black people and people of color,” as he told ESPN.

Many of Kaepernick’s supporters argue that he has been effectively blackballed by NFL teams who do not support his protest. Since he opted out of his contract with the San Francisco 49ers after the 2016 season, he has not been signed by a new team.

A number of celebrities and ordinary people wrote on social media that they will not watch the game to protest the NFL’s treatment of Kaepernick and to show support for his activism.

Basketball great LeBron James tweeted a photo of himself wearing Kaepernick’s number 7 jersey, and director Ava DuVernay tweeted that she would not be watching to support Kaepernick and because of what she termed as the NFL’s “ongoing disregard for the heath + well-being of all its players.”

The NFL is also under fire this year because it chose to recruit the majority-white pop band Maroon 5 to headline the halftime show, even though game is taking place in Atlanta – which is known for its vibrant black culture. African American rappers Travis Scott and Big Boi are also set to perform.

Several artists, including Jay-Z, Rihanna and Cardi B, reportedly turned down the chance to perform at the show in order to show support for Kaepernick.

Cardi B told the Associated Press that even though she had mixed feelings about skipping the opportunity, “there’s a man who sacrificed his job for us, so we got to stand behind him.”

“I haven’t watch a single game of football since the @NFL basically banned @Kaepernick7 for taking a peaceful knee for families impacted by police brutality. I was a super fan, and have so many friends in the league, but I just can’t support a product that has done this,” tweeted King.

During the coin toss, the song “Glory” from the movie Selma (which was directed by DuVernay) played in the background. The film, which tells the story of the 1965 Selma to Montgomery voting rights marches, won an Academy Award for Best Original song for the piece.

Ironically, however, the rapper Common – who performed “Glory” along with John Legend and played civil rights leader James Luther Bevel in the film – had earlier tweeted a photo of himself with activist and writer Angela Davis wearing a Kaepernick jersey.

“You know where I stand,” Common wrote. 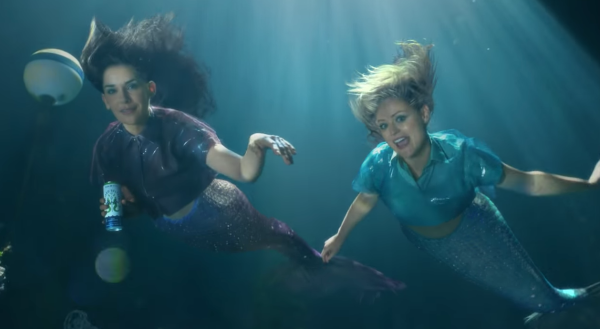 The Spiked Seltzer Mermaid Commercial Is Making a Splash
Next Up: Editor's Pick