Hong Kong democracy activist Joshua Wong announced Saturday that he will run in the city’s upcoming district council elections, a statement timed with the fifth anniversary of the Umbrella Revolution protests he led in 2014.

“I hope to make clear that involvement in small scale community work can make a difference in our city’s politics,” Wong said, standing on a pavement outside government headquarters in the early autumn sun. “I’m convinced democracy will grow from the ground up, from the community. The battle ahead is a battle for our home and for our homeland.”

He was addressing a small gathering of media and supporters, including several pro-democracy lawmakers. Supporters chanted “For our homeland!” and “Democracy now!”

“Hong Kong is a small city of seven million, and it is facing a battle,” lawmaker Fernando Cheung told the gathering. “Joshua Wong is at the front of the battle lines. It is not an easy thing to do at all. He should be renamed as the David of David and Goliath. His strength is insurmountable.”

The 22-year-old will run for a seat on a district council in the city’s south, where he has lived for over a decade. Although such councils are the lowest level of municipal organization, they can potentially be a fast track to the city’s legislature, because the 431 members of district councils across Hong Kong are entitled to elect one of their number to become a lawmaker.

Speaking earlier to TIME, Wong said: “The fight for democracy relies on community support. Realizing how to enhance people’s livelihoods and urban planning is significant.”

Wong’s announcement comes as the semi-autonomous enclave enters its 17th consecutive weekend of protests. The demonstrations were initially a response to a controversial, now withdrawn extradition bill that would have allowed the rendition of fugitives to mainland China. But demands have since evolved and the protestors, mostly of them young, are calling for democratic reform and greater autonomy from Beijing, which has sovereignty over the former British colony under the “one country, two systems” framework.

Last month, official figures showed a surge in the number of registered voters in the city, with the most significant increase seen in the 18 to 35 age group. The spike has been linked to the ongoing protests, which have inspired greater political awareness in many young people.

There is a widespread expectation that the establishment will suffer at the hands of such voters in the coming race. District councils are presently dominated by pro-Beijing parties, but Willy Lam, an adjunct professor at the Chinese University of Hong Kong, says “The protests are bound to have a beneficial effect on pro-democracy candidates.”

Wong’s announcement marks his first participation in a political race. Members of Demosisto, his political party, have had their attempts to enter local politics thwarted. Nathan Law was elected to the city’s Legislative Council in 2016 but disqualified over the manner in which he took his oath, while Agnes Chow was barred last year from running in a by-election due to the party’s support for self-determination for Hong Kong.

Wong acknowledged the possibility that he, too, might be prohibited from running — even for a district-level council. “If they disqualify me, I know it will generate more international momentum to keep focusing on Hong Kong,” he told TIME a day ahead of his campaign announcement.

Hong Kong is meanwhile bracing for a weekend of demonstrations in the lead up to China’s National Day on Oct. 1, which will mark the 70th anniversary of the founding of the People’s Republic.

Later on Saturday, protestors will commemorate the Umbrella Revolution, and on Sunday will take part in an “anti-totalitarianism march” to government headquarters. Supporters in several cities around the world are expected to hold protest rallies on the same day.

Wong says he will submit his application next week to election officials, who will decide whether or not his candidacy can proceed. The vote will be held in November.

“I have no plan to shift the focus from the protests to the election,” Wong told TIME. “But I want to generate more momentum to keep the pressure on Beijing, [whether from] inside the [district] council, on the streets or in the international community.” 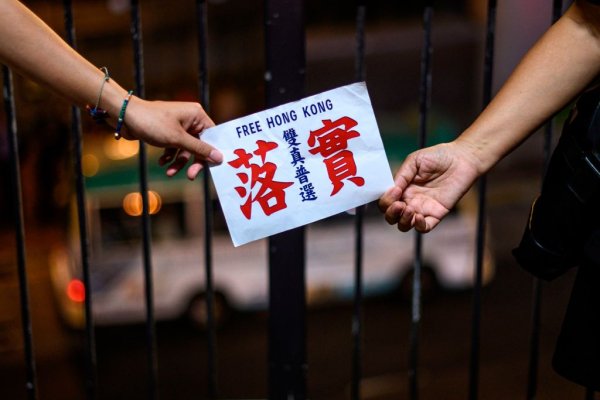 Murder Suspect Who Sparked Hong Kong Unrest May Soon Be Free
Next Up: Editor's Pick