A court in Hong Kong has ruled that four pro-democracy lawmakers are to lose their seats in the territory’s Legislative Council over the manner in which they took their oaths of office when they were sworn in, a fate that befell two of their colleagues last year.

The ruling means that the pro-democracy bloc has lost the power to veto government legislative amendments. Outside the court, a pro-China mob chanted slogans in celebration of the verdict. However, judge Thomas Au said “politics and political arguments” did not feature in his decision.

The four lawmakers — Nathan Law, Lau Siu-lai, Edward Yiu and Leung Kwok-hung — were in a meeting of the Legislative Council’s finance committee when news of the verdict broke. The committee chair immediately suspended the meeting.

Leung — a veteran social activist — had been an elected legislator since 2004, while the other three entered the chamber last September amid a wave of new political faces taking office in the first major elections since the late 2014 massive pro-democracy protests known as the Umbrella Revolution.

Among them, Law was the youngest ever Hong Kong legislator at 23 years old. He first emerged as a leading figure alongside student leader Joshua Wong during the 2014 demonstrations.

A statement issued by his party, Demosisto, said that, with a total of six lawmakers ejected to date, “more than 180,000 voters had their voices silenced.”

The four legislators disqualified Friday follow the footsteps of their more radical colleagues, independence advocates Sixtus “Baggio” Leung and Yau Wai-ching. The pair’s loyalty pledge to the “Hong Kong nation” during their swearing-in last October led to weeks of chaos and political furor that culminated in unprecedented intervention by Beijing.

All of their fates were preemptively sealed in November 2016, when China’s top legislative body, the National People’s Congress Standing Committee (NPCSC), interpreted a clause in the territory’s constitution in a manner unfavorable to the legislators. The move was widely decried as the most severe infringement by Beijing on Hong Kong’s judicial independence and rule of law since the territory came under Chinese sovereignty in 1997.

Under the Committee’s reading of Article 104, which concerns oath-taking by public office holders, anyone “who intentionally reads out words which do not accord with the wording of the oath prescribed by law, or takes the oath in a manner which is not sincere or not solemn” should be barred from taking their public office.

The four lawmakers disqualified today certainly put on their fair share of swearing-in theatrics. Even if they stopped short of calling for independence, their lack of solemnity during their inaugurations gave sufficient pretext for their dismissal to a central government anxious to clamp down on the slightest challenge to its sovereignty over the territory.

For a sector of the population increasingly wary of China’s increasingly transparent involvement in the territory’s internal affairs, the judgment “will confirm their fear that Beijing — while the Chinese Communist Party is in charge — will never give Hong Kong democracy,” says Willy Lam, a longtime China observer at the Chinese University of Hong Kong. “The judges, however, can’t be blamed because they are duty-bound to follow revisions of the Basic Law.”

Both judicial reviews against the separatist pair and the more moderate quartet were brought late last year by the executive branch under the auspices of Leung Chun-ying, the territory’s deeply unpopular, fiercely pro-China former Chief Executive.

“It would have been appropriate for [Leung] to approach the new interpretation in a restrained manner, not seeking to reverse the judgment of voters,” says Michael Davis, former law professor at the University of Hong Kong. “But he declined to show such restraint, presumably to gain favor with Beijing.”

His successor Carrie Lam — chosen by 777 voters among a 1,200-strong, largely pro-Beijing electoral college earlier this year — stood firm on seeing the case through. “I would not regard something wrong as right for the sake of improving relations [with the Legislative Council],” she said earlier this month when asked about the matter.

“The significance of [last November’s] case was that it showed Beijing’s willingness to dictate outcomes to the Hong Kong courts to get rid of politicians that it considered particularly odious,” says Alvin Cheung, an affiliated researcher at the New York University’s U.S.-Asia Law Institute.

“The significance of this case is that it shows the willingness of [Hong Kong’s Department of Justice] to take that precedent and wield it against other political opponents.”

The international community should be concerned, adds Davis. “Foreign countries have been asked by China to treat Hong Kong distinctly from the mainland based on Hong Kong’s high degree of autonomy,” he tells TIME. “To the extent that autonomy is diminished is that treatment still justified?”

With by-elections needed by law to fill the total of six vacant seats, Cheung foresees “highly acrimonious campaigning” rife with “widespread allegations of foul play” when the polls are called. There would also be “more pressure on civil servants to disqualify candidates using thinly-disguised political criteria,” he says, as well as “minimal, if any, efforts by the Liaison Office (Beijing’s official presence in the territory) to disguise their involvement” in propping up loyalist candidates.

“The government may feel that they have the moral high ground in vetting candidates,” adds Lam, referring to a declaration statement rolled out ahead of the 2016 polls that resulted in the exclusion of certain separatist candidates. 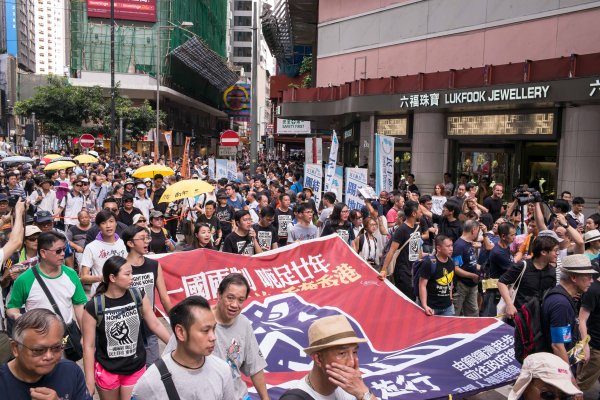