In his third-ever address to the United Nations General Assembly, President Donald Trump spoke in support of his administration’s “America First” policies, arguing that the future belongs to “patriots” over “globalists.”

Speaking before the U.N.’s 193-member body, Trump used his platform to argue in favor of his Administration’s withdrawal from multiple internationally agreed-upon treaties, including the Iran nuclear deal and the United Nations Arms Trade Treaty.

“Wise leaders always put the good of their own people and their own country first,” he said. “The future does not belong to globalists. The future belongs to patriots.”

President Trump pulled out of the Iran nuclear deal — formally known as the Joint Comprehensive Plan of Action (JCPOA) — in May of 2018. The deal was one of the principal diplomatic achievements of the Obama administration, agreed upon with six countries: The U.S., France, the United Kingdom, China, and Russia. In exchange for Iran restricting its ability to develop nuclear weapons, sanctions against the country would lessen.

Trump had long been critical of the deal, arguing it would not successfully prevent Iran from gaining a nuclear weapon. Since the U.S. has withdrawn from the treaty and intensified sanctions on Tehran — going against the wishes of key U.S. allies France, Germany, and the U.K. — tensions between the two countries have risen and intensified in recent months.

In April, Trump announced that the U.S. would withdraw its support of the Arms Trade Treaty in a speech before the National Rifle Association. The treaty, which went into effect in 2014, regulates international trade of conventional weapons, including small arms. The NRA has long argued that it posed a threat against the Second Amendment. Democratic leaders condemned the move, including Senate Foreign Relations Committee ranking member Senator Bob Menendez, who said in a statement, “The Arms Trade Treaty has no impact on Americans’ Second Amendment rights, nor imposes any restrictions on U.S. arms exports… it is disturbing to see this administration turn back the clock on the little progress we have made to prevent illicit arms transfers.”

Trump’s foreign policy approach has repeatedly pushed back against multilateralism: He has also withdrawn from the Paris Climate Agreement, UNESCO, negotiations on the Global Compact on Migration, and the U.N.’s Human Rights Council.

So far, Trump’s time at the U.N. has been a lonely one. He briefly stopped by the main hall of the U.N. to discuss global climate change, but then headed to a separate meeting on global violations of religious freedoms. He is scheduled to spend much of his three days at the U.N. in one-on-one meetings with other leaders. 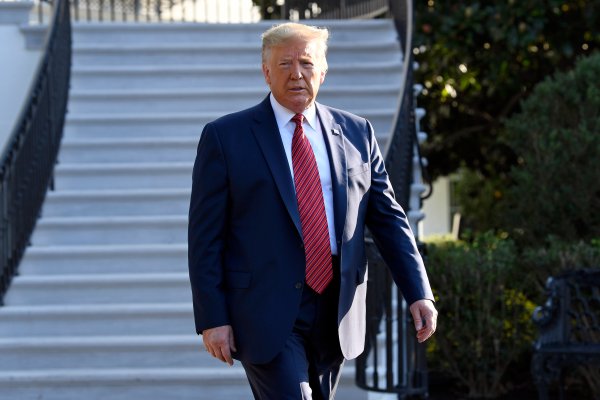 For Trump, It's Lonely Going It Alone
Next Up: Editor's Pick