With Democrats in Congress reluctant to work with him on legislative proposals, President Donald Trump has been casting about for actions he can take on his own. When it comes to guns, he has long promised to do nothing that would restrict the rights of gun owners.

But doing nothing isn’t very photogenic for a showman like Trump. So on Friday, in front of the National Rifle Association’s annual convention in Indianapolis, the President made a big show of undoing something.

In a nearly hourlong speech, he announced he was pulling the U.S. from the Arms Trade Treaty and instructing Congress to stop the ratification process and “return the treaty back to me in the Oval Office where I will dispose of it.”

The treaty is designed to limit international sales of conventional arms to prevent weapons from getting into the hands of human rights abusers. In part under pressure from the NRA, Congress had long stalled the Senate on its consideration of the treaty. Trump’s action on Friday brought it to a complete halt but had no immediate practical effect.

“We will never allow foreign bureaucrats to trample on your Second Amendment freedoms. We will never ratify the U.N. Arms Trade Treaty. I hope you’re happy.” The crowd at Lucas Oil Stadium in Indianapolis stood and applauded. The reaction seemed to surprise Trump, who apparently had thought the crowd might see the action as obscure. “I’m impressed. I didn’t know too many of you would know that that is,” Trump said, seeming to both compliment and insult the audience at once.

A chant of “U.S.A” rose to a crescendo as Trump held up the pen he just used to sign a message asking the Senate to discontinue the treaty ratification process. “They all want the pen. Should I give it to them?” Trump said, and he tossed the pen into the audience.

Trump relishes moments when he can sign something. But Trump’s aides are struggling to gain traction on substantive legislative proposals that could show him getting things done as his term pushes deeper into its second half.

White House officials are working to convince House Democrats to take up Trump’s replacement to the North American Free Trade Agreement, and plan a public relations push in the next few months in rural states to make the case the agreement with Mexico will help the U.S. agriculture industry.

Officials are also working to help move forward several bills in the Senate designed to lower prescription drug prices. In addition, there are preliminary talks about moving forward with plans to fund new highways, bridges and other pieces of U.S. infrastructure, but White House officials believe Democrats are reluctant to give Trump a political victory as the 2020 campaign approaches. 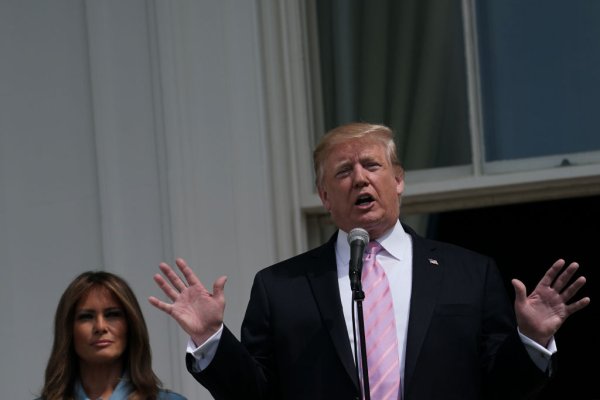 How Trump's Wrong About Impeachment
Next Up: Editor's Pick