Why TIME Devoted an Entire Issue to Climate Change

This issue, if civilization can get its act together, might just mark a midpoint in TIME’s coverage of the biggest crisis facing our planet.

Three decades ago—at a moment when much of the world was only beginning to wake up to the damage humanity had been wreaking on its home—TIME convened a group of 33 scientists and political leaders from five continents in Boulder, Colo., to discuss the threat. The result was one of the best-known issues TIME has ever produced, sounding one of the louder alarms to date. In the Jan. 2, 1989, issue, the editors named “Endangered Earth” the most important story of the year, replacing the annual “Person of the Year” with a planet, our own. The cover, by the artist Christo, showed a 16-in. globe wrapped in plastic and rag rope.

Three decades from now, we will be on the cusp of 2050, the year by which we must have already acted—with urgency as outlined by the U.N.’s Intergovernmental Panel on Climate Change—to have any chance of keeping average global warming to 1.5°C above 19th century levels. That is the line above which scientists agree that the effects of climate change—extreme weather, rising seas, wildfires, a deepening refugee crisis—will be even more disastrous.

Human nature, like journalism, is deadline-­oriented. Our intent with this issue—only the fifth time in our history that we have turned over every page of a regular issue, front to back, to a single topic—is to send a clear message: we need to act fast, and we can. As TIME did 30 years ago, we’ve assembled some of the world’s most influential voices on climate to lay a path forward, from former Vice President Al Gore (who also contributed to the 1989 issue) to the African activist Graça Machel to Chinese environmentalist Ma Jun.

We also explore the essential role of innovation in solving the crisis. And there is deep reporting from every continent on the planet. Correspondent Matt Sandy journeyed thousands of miles by road, boat and small plane to the front lines of Amazon deforestation. Cape Town–based Aryn Baker visited the Great Green Wall of Africa, an $8 billion agricultural project to transform the lives of millions of people living on another major climate-change front. Aryn also ventured to one of the hottest cities on earth: Jacobabad, Pakistan, where summer temperatures regularly exceed 122°F.

At time.com/2050, you can download an immersive 3-D journey into the Amazon narrated by famed conservationist Jane Goodall, and see what it’s like to be in Pakistan in the middle of a deadly summer heat wave. We hope you will also sign up for our new newsletter, One.Five, from TIME climate correspondent Justin Worland; it will explore the interconnectedness of climate with other major issues and track progress against the U.N.’s 2050 goals. And TIME will be hosting two major summits in New York this fall, with climate high on both agendas.

Notably, what you will not find in this issue are climate-change skeptics. Core to our mission is bringing together diverse perspectives. Experts can and should debate the best route to mitigating the effects of climate change, but there is no serious doubt that those effects are real. We are witnessing them right in front of us. The science on global warming is settled. There isn’t another side, and there isn’t another moment.

It is a moment we can rise to—and that is the message of the cover of this issue, a sand sculpture created on the shores east of Tokyo by the Japanese artist Toshihiko Hosaka and photographed by drone. Like the shared work of mitigating climate change, Hosaka’s cover is the result of collective action—a seven-person team worked together for 14 days, dodging a typhoon along the way, to create a visual statement out of the earth itself. 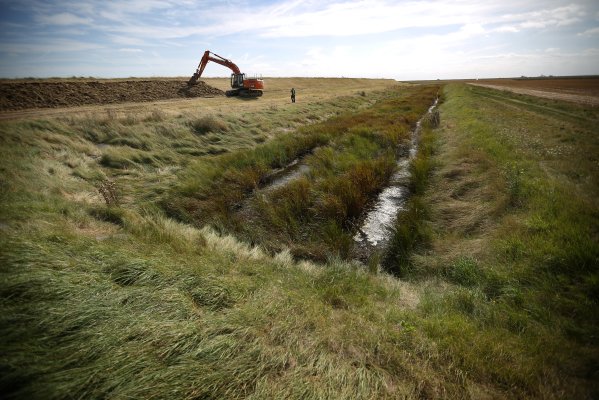 The Best Way to Save Nature? More Nature
Next Up: Editor's Pick