While the 2019 Emmys had plenty of unexpected wins and surprises, one of the most memorable moments of the Sunday night ceremony belonged to someone who wasn’t even nominated this year: actor and lifestyle doyenne, Gwyneth Paltrow.

Paltrow, who presented the award for Outstanding Lead Actress in a Drama Series, captured the full attention of the Internet when she walked very, very carefully across the stage with the smallest, daintiest steps imaginable. While this was probably due to the restrictive nature of her vintage black and white Valentino gown, which featured a very narrow skirt, and her very high heels, the effect of her walking delicately across the stage while Stevie Wonder’s “Superstition” played in the background made for a comedic moment that could only go viral.

As might be expected, awards show Twitter had all of the jokes about the queen of Goop and her precious walk across the stage, with many considering it to be exceptionally on-brand for a woman who’s built an entire empire on her definitive taste in all things lifestyle. 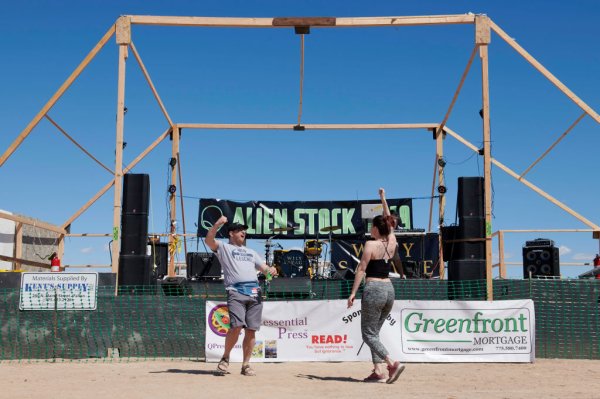 Laughs, Masks and a 'Sense of Community.' Most People Came in Peace to the Area 51 Raid. Here's What Actually Happened
Next Up: Editor's Pick