Dear Evan Hansen, Thanks for Finding Us. We've Been Waiting for a Musical Like You

Illustration by Edel Rodriguez for TIME
By Susanna Schrobsdorff

Dear Evan Hansen is a heart-scorching musical about a teen boy so bound up by anxiety and loneliness that he makes mistakes he can’t fix and gets stuck in the quicksand of social-media adulation. But eventually, he finds a way to leave self-loathing behind. It’s also about parents reaching for their kids as they disappear into their phones and laptops. And it’s about the struggle to connect in an era when it seems as if we’re all awash in emotional hyperbole online and off.

Sounds like a fun time, right? In fact, the play, which has become a huge hit on Broadway since it opened there in December, is cathartic and real and often so funny it’s hard to believe that the catalytic event is the suicide of a kid we barely meet. The songs were written by Benj Pasek and Justin Paul, the pair who just won an Oscar for their work on La La Land. This music reaches a generation that can seem jaded or desensitized having come of age with access to the entire world’s pain and tribulations in the palm of their hand.

Ask one of the many teenagers in the audience if the play seems authentic and they can barely get the words out. They say things like, “I’m in shock, it’s so good.” And often, right behind them, is a parent who’s also feeling undone. I lost it in the first act when the two stellar actors who play mothers of teens sing about feeling totally unqualified for the job of being a parent. “Does anybody have a map?” they cry. “Anybody maybe happen to know how the hell to do this?”

That struggle feels like a hallmark of this particular moment in history. How do you learn to raise the first generation for whom the virtual world is just as important as their physical lives? There’s no precedent. How do you navigate it as a kid? No one knows how it’ll all work out. But one thing is clear, this complicates the traditional parent-teen disconnect. We parents will never understand what it’s like to grow up with two selves, one that must be constantly tended online and another that might be very different.

Take Teresa Hall, who brought her daughter Avery from the Dallas area to New York City for her sweet-16 birthday. “I have two teenagers. You ask them every day, Are you O.K.? They always say, I’m good, I’m good, I’m good. But you never know. You don’t want to push them, you want them to open up on their own terms. But they don’t usually come to you.”

In a show about feeling isolated, moments when characters are able to bridge that gulf that hit hard. At one point, Evan Hansen (played by the spectacularly talented Ben Platt) and his mother Heidi Hansen (Rachel Bay Jones) are at last able to embrace each other. We see a mother trying to comfort a son who’s now too big to fit in her arms, and a son who finally allows her to get close.

“That part with Evan and his mom when she was saying she’ll always be there,” says Avery. “That’s when I got teary.” Seeing the parents’ pain seemed to resonate with teens as much as with parents. And Rachel Bay Jones is able to unleash the kind of deep frustration and fear and vulnerability that most parents can’t post about on Facebook, or talk about with their friends.

Avery’s mother gets emotional hearing her daughter talk about the scene. “I’m surprised that [Avery] says that was the most touching part for her,” says Teresa. “It means that she knows that I’m always here for her.” As everyone crushes out of the theater past them, she wipes her eyes and jokes about starting to cry all over again.

Dear Evan Hansen has an outsize following online. Fans post about how it changed the way they see anxiety and depression in themselves and others. They draw portraits of the cast, make art with the lyrics and share photos holding cards with the song title “You Will Be Found.” At least one person tattooed that phrase on their arm and shared it.

While that digital community is a beautiful thing, the intensity of Evan Hansen is in an old-school interactive experience in which you show up in person and sit very close to whomever you came with. If you’re there with your child, you can sense the way he or she is reacting to what’s happening on stage. Your kid will know when you hold your breath, or let a sob slip out. It’s a visceral exchange, one that feels primal and rare. And like everything with kids, it’s fleeting. Soon enough everyone’s outside, turning on their phones and looking for their earbuds. 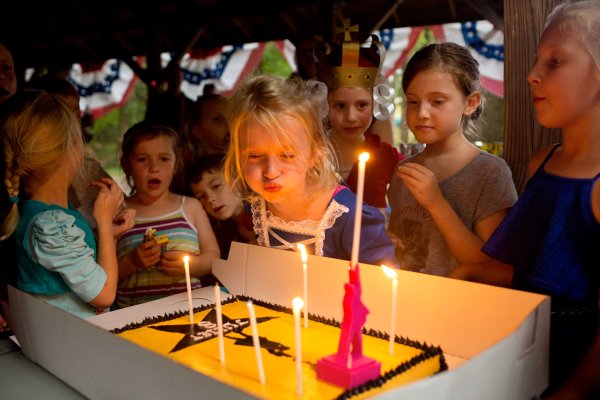 Hamilton Conquered Broadway. Next Stop, the World
Next Up: Editor's Pick