Billy Porter made an entrance fit for a king at the annual Metropolitan Museum of Art’s Costume Institute Benefit on Monday evening.

Porter, who is a star in the current TV series Pose and made a name as the Tony-winning lead in Broadway’s hit show Kinky Boots, cleared the entire red carpet when he arrived at the 2019 Met Gala.

He was carried in, reclining regally, on a velvet-draped litter hoisted by a team of six bare-chested attendants in golden pants and face and chest hardware. Porter himself wore an elaborate golden costume and headdress, reminiscent at first glance of a pharaoh. When he deigned to descend to the red — or, rather, pink — carpet, it turned out that Porter’s costume also included sweeping golden wings, making his look more akin to that of Isis, an Ancient Egyptian goddess.

Porter is known for his bold red carpet moments: at the 2019 Oscars, he appeared in a sweeping black tuxedo gown that wowed fashion critics and onlookers; before that, he had donned a pink cape for the Golden Globes.

At the Oscars, he explained his fashion ethos to Vogue: “My goal is to be a walking piece of political art every time I show up. To challenge expectations. What is masculinity? What does that mean?” Looks like he lived up to that goal at the camp-themed Met Gala this year. 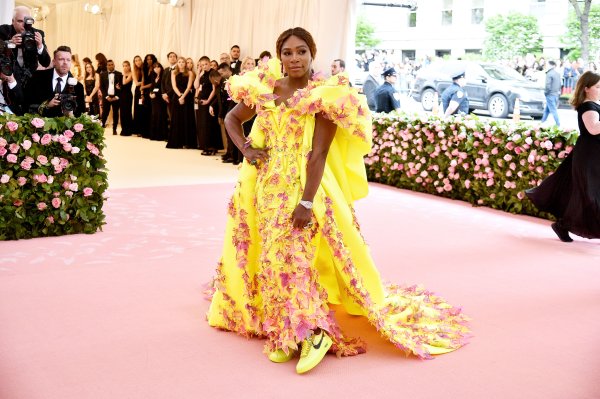 Serena Williams Showed Up to the 2019 Met Gala Looking Like a Vision in a Stunning Gown and Matching Sneakers
Next Up: Editor's Pick