Exactly one month after a mass shooter opened fire in an El Paso, Texas, Walmart, the company’s CEO has announced that it is asking all customers to stop openly carrying guns in its stores nationwide.

In a public statement addressed to Walmart employees on Tuesday, CEO Doug McMillon said “the status quo is unacceptable,” and listed new gun rules at all Walmart and Sam’s Club stores.

In addition to halting customers from openly carrying guns even in states with “open carry” laws, McMillon also said they will stop selling handgun ammunition and certain short-barrel rifle ammunition.

The changes come in response to a mass shooting at a Walmart in El Paso, Texas, on August 3, in which a shooter killed 22 people in the predominately Hispanic city after allegedly publishing a racist and anti-immigrant manifesto. The El Paso shooting took place a few days after a Walmart employee in Southaven, Miss., shot and killed two coworkers.

“Our immediate priorities were supporting our associates and the impacted families and cooperating with law enforcement. In parallel, we have been focused on store safety and security,” McMillon said. “We’ve also been listening to a lot of people inside and outside our company as we think about the role we can play in helping to make the country safer. It’s clear to us that the status quo is unacceptable.”

McMillon announced an end to the sale of short-barrel rifle ammunition such as the .223 caliber and 5.56 caliber after selling through their current supply. Similarly, Walmart will discontinue handgun ammunition after selling through their current supply, and will discontinue sales of handguns in Alaska, the last state where those weapons are sold, effectively ending all handgun sales nationwide.

McMillon also noted that it is “respectfully requesting” that customers no longer openly carry guns into their stores in response to several incidents of men bringing a firearm into Walmart stores, including in El Paso. Just days after the El Paso shooting, a man also caused “panic” at a Missouri Walmart when he walked in heavily armed and wearing body armor. The company said its concealed carry policy will not change.

“As it relates to safety in our stores, there have been multiple incidents since El Paso where individuals attempting to make a statement and test our response have entered our stores carrying weapons in a way that frightened or concerned our associates and customers,” McMillon said. “We believe the opportunity for someone to misinterpret a situation, even in open carry states, could lead to tragic results.”

March For Our Lives, as well as individual survivors and parents of victims of the shooting in Parkland, Florida, thanked Walmart on Twitter after the news went public. Those who spoke out include March For Our Lives cofounder David Hogg and Fred Guttenberg, whose daughter Jaime Guttenberg died during the shooting at Marjory Stoneman Douglas High School on February 14, 2018. 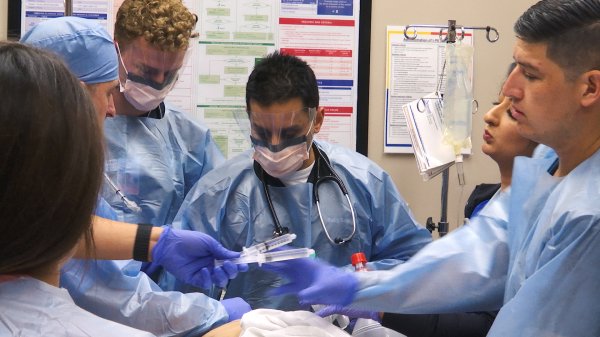 Doctor Who Treated Saddam Hussein Cares For Odessa Victims
Next Up: Editor's Pick