25-Year-Old Mom 'Gave Her Life' to Shield Her 2-Month-Old. These Are the El Paso Shooting Victims

Twenty-two people have died and 26 were injured in a mass shooting at a Walmart in El Paso, Texas, on Saturday, when a man opened fire on a store filled with customers.

Local hospitals have confirmed that they’re treating more than 20 victims of the shooting, the Associated Press reported.

Shooting survivor Octavio Ramiro Lizarde spoke to reporters on Tuesday at a press conference at Del Sol Medical Center. Lizarde described watching as the gunman killed his nephew, Javier Amir Rodriguez, who was 15 and the youngest victim of the attack. Lizarde was shot in the foot.

“I feel grateful that I’m alive. He had the chance to kill me, but he didn’t because God’s with me.”

The initial death toll was previously reported at 20, but the El Paso Police Department announced an additional person died at a hospital early Monday morning, as did the Del Sol Mar Medical Center.

There were 11 victims at Del Sol Medical Center, and three of those patients remained in critical condition, Director Dr. Stephen Flaherty said at a news conference Sunday morning, according to CNN. Their ages range from 35-82.

El Paso police spokesperson Sgt. Robert Gomez said that the Walmart was “at capacity” at the time of the shooting, and that between 1,000 and 3,000 people were believed to be inside. Police had responded within six minutes after receiving the first reports of an active shooter at 10:39 a.m.

“I lament the events that have occurred in El Paso, Texas, neighbor and brother to Ciudad Júarez and our country. I send my condolences to the families of the victims, American citizens as well as Mexicans,” he wrote on Twitter.

Mexican Foreign Relations Secretary Marcelo Ebrard tweeted on Sunday morning that seven Mexicans were wounded in the shooting. On Sunday evening, Ebrard shared the names of seven of the victims.

The attack is being investigated as an act of domestic terrorism, and the alleged shooter, Patrick Crusius, is facing possible hate crime charges.

“If he was a racist, poor him,” Lizarde said of Crusius. “That doesn’t have to be a reason to kill.”

A 25-year-old woman and mother of three, Jordan Anchondo was killed while trying to shield her 2-month-old son, according to the AP.

Anchondo’s 19-year-old sister Leta Jamrowski learned the day of the shooting that Anchondo had been one of the victims.

“From the baby’s injuries, they said that more than likely my sister was trying to shield him,” Jamrowski told AP. “So when she got shot she was holding him and she fell on him, so that’s why he broke some of his bones. So he pretty much lived because she gave her life.”

The 23-year-old was the husband of Jordan Anchondo and the father of their two-month-old son. According to the Associated Press, a friend said he had recently started a business in El Paso that built things from granite and stone, after turning his life around from drug dependence and run-ins with police.

“He had the character and the charisma,” Koteiba “Koti” Azzam, a friend of Andre Anchondo, said, according to the Associated Press.

Another one of Andre’s friends, Benjamin Thompson, had not met Jordan, but told The Dallas Morning News that he had heard she seemed to be a “happy and family-fueled mother.”

“What happened to their new beautiful family is devastating,” Thompson said.

Arturo Benavides, whom other media outlets have reported was 67 years old, was one of the victims who died in the attack, his wife tells TIME.

Benavides was a bus driver and an army veteran, according to CNN. “He was an absolutely caring and strong-willed man,” his niece Jacklin Luna told CNN. “He was the person that would give any dime and shirt off his back, a meal and a home to anyone.”

Mario De Alba, who is reported to be in serious condition after being shot in the back, has a Facebook page full of pictures with his 10-year-old daughter Erika, the AP reported.

In one photo, he is wearing a Patriots vest in the front seat of a car while Erika is sitting in the back. In another, they are standing in front of what appears to be a Christmas tree. In a third, Erika is making a heart symbol with her hands, while wearing a pink sweater.

His sister described him as an “excellent father” and as a “decent, hardworking person,” according to the Associated Press.

He lives in Mexico about four hours from El Paso. He came into town to go shopping for school supplies with his family.

Norma Coca told KWCH, a TV station in Wichita, Kansas, that her daughter and son-in-law were near the entrance of the Walmart on Saturday morning when they were shot and injured, according to the Associated Press. They were at Walmart raising funds for a youth sports team on which one of their children plays.

Jessica and Memo’s five-year-old-son and 11-year old-daughter were also at the Walmart, but were not shot, the Associated Press reports.

Englisbee, 86, was in the check-out line at the time of the shooting and had just hung up from a phone call with her son, the New York Times reports.

Englisbee’s granddaughter Mia Peake told the Times that she had seven children, and a son who died as an infant. She loved watching General Hospital and was “a very strong person, very blunt,” Peake added.

CNN affiliate KFOX/NDBC reports that Campos and Hernandez had dropped their dog off at the groomer before going to Walmart. The family told the outlet they didn’t realize there was anything wrong until the groomer called to say the dog had not been picked up. Police later confirmed that both died in the shooting.

Rodriguez, 15, was getting ready to start his sophomore year of high school. He attended Horizon High School in El Paso, according to the AP.

Manzano, from Ciudad Juarez, Mexico, ran an orthopedic implants business. He had a 5-year-old daughter and a 9-year-old son, the AP said

His wife, Adriana Manzano, said that he was friendly and calm. According to the AP, she told their children that he died in an “accident,” choosing not to give them the full story.

Johnson, 63, was shopping with his wife and his 9-year-old granddaughter for back to school stuff when the shooting happened, the AP said.

Johnson’s nephew Dominic Patridge called his uncle “the kindest and most giving individual I’ve ever known,” according to the AP.

Calvillo Garcia, 61, was a Mexican national from Torreon, Coahuila.

Hoffman, 66, was a German citizen.

Juarez, 90, was a U.S. citizen and the oldest victim in the shooting.

Legarreta Rothe, 58, was a Mexican national from Chihuahua, Chihuahua.

Marquez, 61, was a Mexican national from Ciudad Juárez.

Regaldo Moriel, 66, was a Mexican national from Ciudad Juárez. Her husband, Hernandez was from Aguascalientes, Mexico.

Sanchez, 82, was a Mexican national. 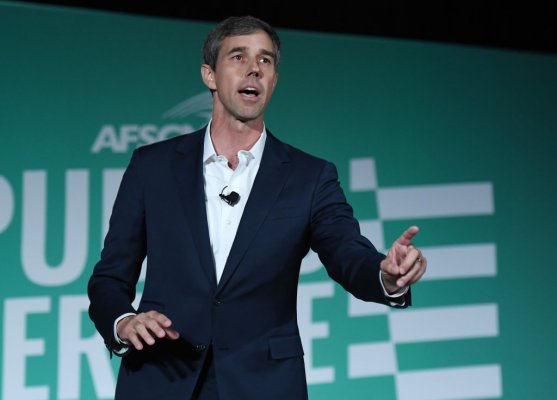 Beto O'Rourke Halts Campaign to Return to El Paso
Next Up: Editor's Pick