'In El Paso, Everyone Is Family.’ Walmart Targeted by Gunman Was a Hub for Shoppers From Both Sides of the Border

A mass shooting at a Walmart in El Paso, Texas, rattled residents who pride themselves in being from a place that is considered one of the safest cities in the country. It’s a predominately-Hispanic, tight-knit community, which residents say is like one large family combined with sister city Ciudad Juárez on the other side of the border.

The Walmart at the center of Saturday’s mass shooting has long been a hub for shoppers from Juárez, as it sits just minutes away from international ports of entry. On weekends, license plates from Chihuahua, one of Texas’ neighboring Mexican states, can be seen scattered through the parking lots surrounding Cielo Vista Mall, the Walmart where the shooting took place and the neighboring Sam’s Club, three separate shopping centers that are all within walking distance of each other.

At least 22 people have died, including at least seven Mexican nationals, as a result of Saturday’s mass shooting. Additional Mexican nationals were among the 24 reported injured, according to Mexico government officials.

“What are the odds or how would he even know that that Walmart specifically would have people coming from Ciudad Juárez? I don’t know if it’s a coincidence or if he directly knew,” Sofia Montañez, an El Paso resident who was barricaded with her family in neighboring Sam’s Club for more than three hours because of the shooting, told TIME.

Whether or not the alleged shooter — who has been identified as Patrick Crusius, a white, North Texas native who drove at least eight hours to arrive in El Paso — was aware of this detail, is unclear.

“This Anglo man came here to kill Hispanics,” said El Paso County Sheriff Richard Wiles in a Facebook post. “I’m outraged and you should be too. This entire nation should be outraged. In this day and age, with all the serious issues we face, we are still confronted with people who will kill another for the sole reason of the color of their skin.”

Linda and Saul Lara, El Paso residents who were in the Sam’s Club parking lot when the shooting started, said the entire shopping center was packed that day with people from El Paso and Juárez preparing for the start of the school year. Saul Lara tells TIME that El Pasoans are used to seeing their neighbors from Juárez shopping at the Cielo Vista Walmart.

“Growing up there would be a lot of frontera [border], Chihuahua license plates,” Saul Lara says. “It’s packed, and it’s not uncommon. People from El Paso are used to seeing this and it’s no big deal.”

Many El Pasoans, including Montañez and Linda and Saul Lara, used the terms “family” and “community” to describe the culture of El Paso county, which is made up of more than 840,000 people.

“El Paso is not like this. El Paso would have taken care of [Crusius], would have loved him, would have brought him into our home. We are not full of hate,” Linda Lara tells TIME. “For someone to bring his hate towards us, and this hurt towards us infuriates me.”

Cielo Vista Mall was opened in 1974, and has been a popular destination for El Paso and Ciudad Juárez residents, two cities in such close proximity to each other that it is possible to accidentally take the wrong exit in El Paso and end up facing border agents at a port of entry into Juárez.

The two cities are so intwined that children cross the border daily to get to school in El Paso though they live in Juárez, and many El Paso residents cross the border into Juárez for affordable health care on a daily basis.

When the Walmart opened up at Cielo Vista in 1994, it quickly became a go-to shopping hub for people from Juárez because of its close proximity to Interstate 10 and international ports of entry, residents tell TIME.

Saturday was another packed day at the mall, Sam’s Club and Walmart ahead of the start of the new school year, which Linda Lara, who lives about a mile and half from the Walmart, describes as something like a holiday.

“El Paso’s a happy-go-lucky, deeply loving city,” she tells TIME. “Everybody is coming to do their shopping, to say ‘excuse me,’ to hold open doors, to be very kind to each other. And it was packed, like you’re shopping for a holiday because back to school is a major thing here. You want to get your kids cute little clothes, you want to get your kids everything they need.”

Vianét Lopez, an El Paso resident who tried twice to donate blood but was unable to both times because locations were at capacity both Saturday and Sunday, tells TIME that the Cielo Vista mall area is a nostalgic place for her.

“When you see that location, you see all the memories that pop up,” she says. “After this tragedy I feel it’s gonna be a symbol of something that was so devastating, but we mourned last night and we’re going to be so much stronger today, that’s what it will symbolize.”

On Saturday morning, Montañez was on her way to a bakery in Central El Paso when her 2-year-old son, who is potty training, said he needed to use the bathroom. Montañez, along with her cousin, stopped into the Sam’s Club next door to the Cielo Vista Walmart for a break.

They were leaving the store when others, including Sam’s employees, started rushing and urging them back inside. That’s when the store went on lockdown, Montañez tells TIME.

“They tell us, you can’t leave, there’s a shooting outside,” Montañez says. “We were heading inside, people are screaming, there’s people shot… I was shattered, honestly, I just wanted to scream and pretend this didn’t happen, but I had to be strong for my son.”

She says wounded people began entering the Sam’s Club and were being treated by employees and an ambulance that arrived later. She was barricaded inside of the Sam’s Club for more than three hours, she says.

“Just to know that there’s someone out there that has so much hate in his heart and was willing to drive more than nine hours just to do this to our city, it’s unbelievable,” Montañez says. “What’s even worse to think about is, as strong as we are as a community — because that’s what El Paso is — is that after, there will be people who will glorify him because they have the same thoughts.”

Meanwhile, Linda and Saul Lara were outside of the Sam’s Club when they began hearing shots.

“It was like, boom, boom, boom, boom, 10 or 15 shots really fast,” Linda Lara says. The couple got to their car and began driving away, and as the shots continued, Linda called 9-1-1 while they watched people run for cover and parents shield their children.

Linda Lara said she had to tell her husband, Saul, that he couldn’t help, and they had to leave.

“My instinct was to help the people,” Saul Lara says. “I felt useless, I felt helpless, I felt like I should help but I can’t, I don’t want to endanger my wife, and watching these people run for cover, I was just — it became fight or flight, and flight took over.”

Lopez was born and raised in El Paso and says she knows the city like the back of her hand. She says people from both sides of the border are family, both literally and figuratively.

“The Walmart is so centrally located, so close to the border, [Crusius] probably thought that it would be a good target,” Lopez said. “But that Walmart is for everyone. It’s for everyone in the community, not just people who are crossing the border.”

When Montañez and her family were permitted to leave Sam’s Club, at approximately 1:40 p.m., she says everyone was instructed to keep their hands above their heads. Her 2-year-old son, unaware of what was happening, copied those around him and also kept his hands up. Then they went straight to her parent’s house.

“When I first started seeing [Crusius’] image, the first thing I thought is maybe this person hadn’t seen love,” Montañez adds. “In El Paso, everyone is family. It doesn’t matter who you are, we’re here with open arms, we give out as much as we can… if he was raised here, he would have known who we are, because this love in El Paso it just spreads out, and it’s infinite.” 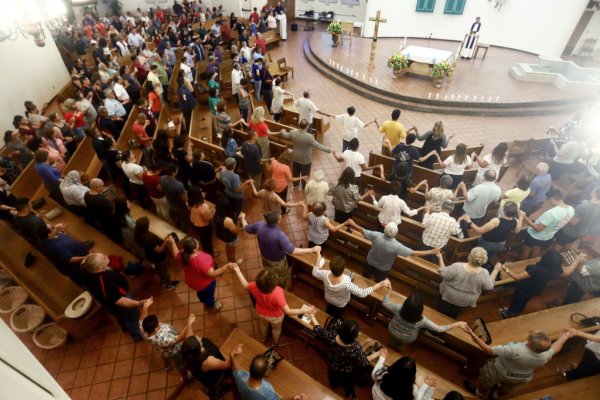 These Are the El Paso Shooting Victims
Next Up: Editor's Pick