For decades, health professionals in El Paso County have made efforts to increase access to mental health care by reducing the leading barrier to care — stigma — with some minor success. But since the mass shooting at a Walmart in the border city that killed 22 people on August 3, those working in the mental health care field say there has been increasing demand for their services and they believe it may be a turning point in public perception.

Mental health care in the predominately Hispanic border city has not been easy to access for many residents. A high uninsured rate, language barriers and a shortage of mental health care professionals in the region are all factors, and El Pasoans also face the challenge of overcoming cultural barriers to entry, including a notion that “la ropa sucia se lava en casa,” a Spanish expression that translates to “dirty laundry is to be washed at home” — the belief that issues should remain private and handled within the family.

“It can span from religion, to the belief that [mental illness] just doesn’t exist, or a ‘people just need to get over it’ attitude — sort of machismo culture where you don’t admit anything’s wrong with you, you’re not allowed to cry and you just have to get over something,” says Isidro Torres, director of outreach and fundraising for the National Alliance on Mental Illness El Paso (NAMI El Paso), which has for decades attempted to reduce the stigma in the area. “It forces people to deal with things alone, or deal with it within the family.”

Although mental health care stigma is not unique to the border city, it has remained persistent and created a barrier to mental health care, explains Torres. El Paso County is 83% Hispanic. A 2001 report by the Surgeon General found that only 10% of Hispanics nationally contact a mental health specialist. In 2017, only about 36% of Hispanics with a mental illness received treatment, according to data by the Substance Abuse and Mental Health Services Administration.

A 2017 study by WalletHub reported El Paso has one of the highest uninsured populations in the country. Out of 547 cities examined for the study, El Paso ranked at 520. Still, stigma is the hardest challenge to overcome, Torres says.

Since the shooting, mental health experts have opened their doors and lines of communication to an increasing number of El Paso residents. Medical organizations, nonprofits, church groups and individual doctors began providing immediate mental health care in response to the shooting, including running 24-hour hotlines, opening up free walk-in clinics, hosting open forums and forming a counseling cooperative group. On the day of the shooting and in the days since, Emergence Health Network’s (EHN) 24-hour crisis hotline, 915-779-1800, has received nearly double the amount of calls it usually receives on an average week. One clinician tells TIME calls from her clients have gone up 30% since the shooting.

On an average Saturday, the EHN hotline receives about 60 calls, but on the Saturday of the shooting, EHN answered 133 calls. The number of calls peaked on the Tuesday following the shooting at 196 calls. On an average Tuesday, that number would be 95. At a city vigil Wednesday night to honor the victims of the shooting, the crisis hotline was also on display.

EHN, which describes itself as the largest mental health provider in El Paso County, also partnered with Atlantis Health Services and the El Paso Psychiatric Center to form the EPStrong Counseling Co-Op to run five free and temporary daily walk-in clinics to address the shooting in locations throughout the city — over 60 people have utilized them so far, EHN says.

“Everybody’s just been going,” EHN CEO Kristi Daugherty tells TIME, adding that more people are “absolutely” starting to utilize the free mental health resources being provided throughout the city, including the walk-in clinics that do not require insurance and do not require identifying information or proof of residency — eliminating some of the barriers to care for people.

According to Daugherty, who also sits on the board of a hospital in Ciudad Juárez, mental health care resources are even more strained south of the border. In a bi-national community where more than 22% of El Pasoans under the age of 65 don’t have health insurance, Daugherty says it is essential to provide free services like the walk-in clinics. The clinics will remain open and free as long as the pubic demand remains high, Daugherty adds.

“The last thing you want to have to do is have a line of people standing, filling out forms or handing in insurance cards,” Daugherty says. “We wanted people to walk in, sit down and talk to someone. We don’t want to set up any barriers that could turn people away when you have this many people effected.”

And many say the conversation around mental health care is finally starting to change.

“I think people are becoming a little more sensitive to saying, ‘you know, maybe I need to come to terms with the fact that I’m feeling this,” says Elizabeth Robles, Clinical Director of the Mano Y Corazón [Hand and Heart] Institute of Integrative Health, an El Paso-based health care organization that works with medical professionals to meet the needs of the community. “Trauma doesn’t go away by itself.”

Attendees are pictured during the El Paso Interreligious Sponsoring Organization's assembly at St. Paul the Apostle Catholic Church to help the community discuss their feelings in the wake of the mass shooting in El Paso, Texas on August 8, 2019.
PAUL RATJE—AFP/Getty Images

That willingness happened in part because immediately after the shooting, EHN began deploying a network of clinicians to speak to law enforcement, first responders, people attending emergency rooms and at the family reunification center where hundreds of people gathered to find their loved ones.

“A lot of the things we dealt with that first day, even in our calls from the community, was ‘why? Why El Paso? Why us?'” Daugherty says. “Some people asked, ‘could I have done more? What could I have done?’ And then others were: ‘I was supposed to be at that Walmart and I decided not to go.’ So we were really trying to help people work through a lot of things that you just can’t answer.”

Robles says people in the mental health field need to band together, especially because many El Pasoans may be experiencing trauma even if they or their loved ones weren’t hurt. Because the mental health effects of trauma can sometimes appear in the weeks and even years after the events that caused it, both Torres and Robles say they hope that people in the community continue to utilize resources into the future. Which is why, along with two other clinicians, Robles hosted a Saturday presentation for parents to help children cope with trauma, one of several types of events taking place in the coming days and weeks since the shooting.

“As Mexican-Americans, or as Chicanos, or Mexican Nationals or what have you, death is a very sacred part of living, it’s a very important part,” Robles says. “This particular death makes no sense… When abuelita dies in the hospital you have a sense of what’s happening, and in your mind you see ‘A’ and ‘B’ happened so now we have ‘C.’ There’s a logic to it, but there’s no logic to what happened here, there’s no making sense of this shooting, and that’s what makes it a traumatic event.”

Torres says more resources can help everyone. “Now, after this tragedy [mental health care] can help us cope,” Torres says. “And help us get through it and help us be stronger as a community and help us heal.”

Mano Y Corazón tried to address this stigma in 2016 by launching a 64-day behavioral health awareness program. During that time they spoke with over 400 people about 16 topics including anger management, depression, suicide prevention and grief. “In a place like El Paso, 400 people is a lot,” Robles says.

During that time, Robles says Mano Y Corazón found that people in the community were interested in talking about mental health — many people attended more than one session, according to Robles — and were able to move past the stigma after having an open discussion. She added the key was making people aware of free resources that enabled a safe and open discussion.

Through the program, Mano Y Corazon were able to refer about 100 people to a mental health professional, according to Robles.

“It was to really demonstrate that these topics are part of our every day lives. And just like you wouldn’t walk around with a broken leg and not ask for help, you shouldn’t walk around depressed and not feel that it’s okay and proper to ask for help,” says Corinne Chacon, the managing cofounder of the organization. “What we found is our community really wants to talk about these topics, but they needed the venues.”

“And our people, quite frankly, our raza is very open to it,” Robles adds. “Much more open than people think, but you gotta help them tap into the resources.”

Since then, Robles says people have started to change, and after the shooting more people have been open to talking about the effects of trauma.

“From a clinical point of view there is a profound impact in regards to traumatic grief,” Robles says. Taking into consideration the more than a million people who live and travel between El Paso and Juárez, “then you have a critical mass that is going through this trauma,” she adds.

“Trauma becomes generational and it impacts people profoundly,” Robles says. “So we want to be able to do what we can to assist people.”

Robles adds that dealing with extreme violence targeted at an ethnic group is something that clinicians are thinking about in their work.

“A behavioral health specialist always needs to have a level of cultural competency to understand the dynamics of the person, the individual or group they are working with,” she says. “That doesn’t mean that you need to go and find out what works for Mexican Americans, Chicanos, or anybody else…it’s not really about pointing out the differences as much as being sensitive to them, understanding—and understanding that people come from that point of view.” 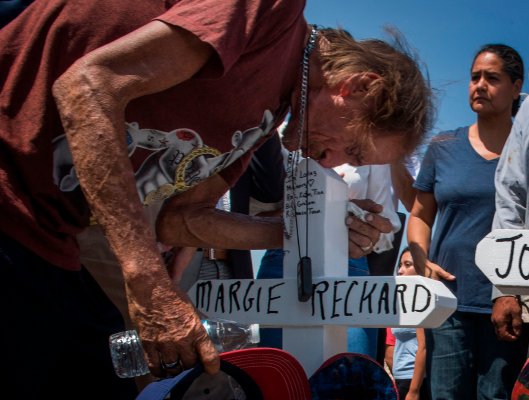