Local media estimated that as many as 10,000 students from some 200 secondary and tertiary institutions were joining the class boycott, which was co-organized with two student groups. As the morning got underway, pupils from both elite private colleges and government secondary schools braved the stormy weather to join hands in human chains around their campuses.

At Queen’s College, one of Hong Kong’s oldest and most prestigious schools, alumni turned out with current students in protest, chanting “Liberate Hong Kong, revolution of our time!” before singing the school song.

At Chinese University, students prepared to boycott classes in defiance of an appeal from university authorities to call off the action because of the risk of unrest. Student Union chair, Jacky So, reportedly declared “If going against an evil law and tyrannical rule gives us the name of rioters, we gladly accept.”

Students at St. Francis’ Canossian College, the alma mater of Hong Kong’s beleaguered top official Carrie Lam, knelt in the rain and held signs calling for the administration to meet the protesters’ demands, one of which is Lam’s ouster.

There were reports of police showing up at several schools to search striking students, while staff of two major hospitals held sit-ins in support of the student strike.

At a rally in the afternoon, students held signs reading “Hong Kong people cannot back down” and “Strike Hong Kong,” while teachers took to the stage to exhort students to continue their struggle.

Ng Mei-lan, a government secondary school teacher, said: “I have been on the front lines … I’ve inhaled [all the tear gas] you have inhaled. I can’t run as fast as you can but I can still run.” She added: “I never thought that as a civil servant, a middle aged teacher, that I would be so changed by this movement.”

Chan Chi-chung, a former school principal, declared: “If you think that striking is the right and logical thing to do, then we are right behind you, supporting you all the way.”

The actions come after a chaotic weekend of unrest that saw police deploy water cannon and tear gas at masked radicals who broke away from a march Saturday to lob petrol bombs at the city’s main government offices. Extremists also set fire to barricades and provoked police into firing live warning rounds.

Speaking to reporters Monday, Hong Kong’s top security official, John Lee, said “radical protestors” were acting lawlessly and that “their violent actions are escalating to a point of terrorism.”

On Sunday, protesters severely disrupted operations at Hong Kong International Airport, forcing the cancellation of train and bus services and leaving arriving passengers with no means of making it into the city center. Traffic to the airport was also at a standstill, with reports of desperate travelers abandoning their vehicles on the highway and trudging many kilometers to the airport, wheeling their suitcases behind them.

After leaving the airport, black-clad demonstrators—who also targeted the facility last month, shutting it down for two days—ransacked a major train station and burned the Chinese flag.

The city’s train operator has come under sustained attack from protesters, who accuse it of arbitrarily shutting down stations to prevent them from freely moving around the city. At a press conference Monday, transport secretary Frank Chan Fan said 32 stations, or a third of all stations on the network, had been damaged.

At the same conference, Chief Secretary Matthew Cheung said the government had issued its “strongest condemnation of the barbaric behavior of protestors.” He also voiced disapproval of the student strike.

“Schools are not a place for expressing political demands,” he said. “There is nothing good that will come out of the strike.”

Meanwhile, in a boost for the democracy movement, a court decided that Demosisto activist Agnes Chow, 22, was eligible to stand for election to the enclave’s legislature. Recently arrested and bailed on charges of inciting an illegal assembly, Chow was banned from standing in a 2018 by-election because her party calls for self-determination—a stance that authorities say is incompatible with the oath of allegiance she would have to swear if she was elected to the law-making body.

The Hong Kong protests, which are now in their 13th week, began as a series of demonstrations against a divisive bill, but quickly escalated into a rebellion against the unrepresentative local government and a broad push for political freedom. Many protesters seek full autonomy or even independence for the enclave, whose 7.2 million people are linguistically and culturally distinct from mainland Chinese.

In response, Beijing has stepped up its rhetoric against the former British possession, which was retroceded to China in 1997 after 156 years of colonial rule. On Sunday, the state news agency Xinhua warned that “the end is coming for those attempting to disrupt Hong Kong and antagonize China.”

“The government has already shown us that peaceful protests are useless,” Issac Cheng, vice chair of Demosisto, told TIME. “This has led students to think of an escalated form of demonstration, which is what this is. The strike shows our determination to continue fighting.”

Activists plan to call the strike every other Monday going forward. 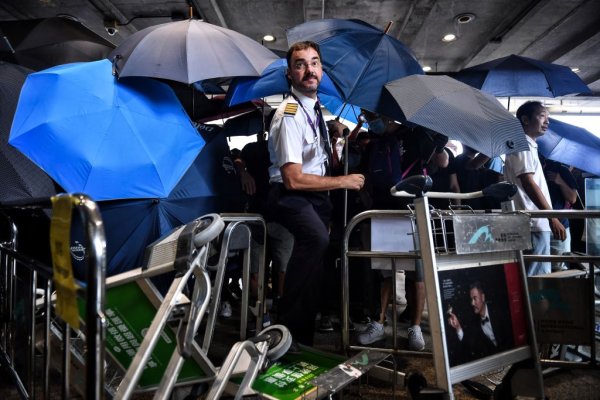