Demonstrators invaded the terminal building at Hong Kong International Airport for a second day Tuesday, forcing the cancellation of all flights out of the restive territory from the late afternoon.

Scuffles broke out earlier in the day as black-clad protesters physically blocked and pushed back against travelers attempting to pass from the departure level through to security and immigration check points.

“We’re supposed to be home right now,” said Sehem, a 23-year-old medical student trying to return to Europe. “We’ve been in the airport for more than 24 hours, we’re super tired, we just want to go see our families—and we have exams in ten days. We need to get home and study.”

Many passengers vented their anger at airline staff. One man screamed “I want to go home!” at an airline representative. When protesters complained about being unable to reach the departure gates, protesters chanted “Blame the government!”

The latest cancellations come a day after protesters brought one of the world’s busiest airports to a standstill, forcing the grounding of all arrivals and departures from mid-afternoon Monday and leaving hundreds of travelers stranded.

Hong Kong’s political crisis began in June as a series of peaceful marches against a now-suspended bill that would have allowed the extradition of criminal suspects to mainland China from the semi-autonomous enclave for the first time. But the movement has since snowballed into a push for greater political freedom and self-determination for the former British colony. Protesters also seek the ouster of Hong Kong’s unpopular top official, the exoneration of all those arrested during demonstrations, and an independent inquiry into how the police handle protests, which are frequently marred by violent clashes.

A three-day airport sit-in was scheduled to end on Sunday, but police actions at protests in downtown Hong Kong that evening caused widespread anger and prompted thousands to head back out to the airport on Monday and renew their occupation of the terminal building in protest.

Videos circulated online showed police on Sunday apparently firing crowd-control weapons at protesters at close range in enclosed spaces, like subway stations. One young woman, believed to be a medic, was reportedly blinded after being hit in the eye with a projectile.

“What happened on Sunday [night], the violence, made many people furious about the abuse of power,” Iris, a 28-year-old protester and a teacher, told TIME on Tuesday. “We don’t think [yesterday’s airport protest] was enough. This is just the start, a lot of people are at work. Later there will be more coming out.”

More than 120 airlines use Hong Kong Airport, connecting the city to some 220 destinations. The facility handled nearly 75 million passengers in 2018 and 5.1 million tonnes of cargo and mail, playing a crucial rule in Hong Kong’s economy.

Speaking at an aviation forum in China in May, Hong Kong’s Secretary for Transport and Housing, Frank Chan Fan, said “The direct, indirect and associated economic contributions of the Hong Kong International Airport [add up to] five per cent of Hong Kong’s GDP.”

For protesters, that makes the facility a strategic target.

“I hope flights get cancelled today because we should destroy the Hong Kong economy unless the Hong Kong government responds to our … demands,” said 21-year-old Tang. “We are here to tell everyone we can’t let the Hong Kong police abuse our citizens.”

He said protesters would return tomorrow and every day until their demands were met.

Some passengers expressed support for the protests, despite the inconvenience to themselves.

“I support what they’re doing, there’s truth to what they’re saying. They’re safe in the airport, [where] the police can’t do what they did in the streets of Hong Kong and in the metro. They have a right to do this,” said a 29-year-old Romanian traveler, Daniela, who was attempting to return to her home in Paris.

Others were simply philosophical. Alejandro, 33, was at the airport trying to fly to Jakarta for business. “I’m from Puerto Rico,” he said. “I’m used to this.”

—With reporting by Amy Gunia and Abhishyant Kidangoor / Hong Kong 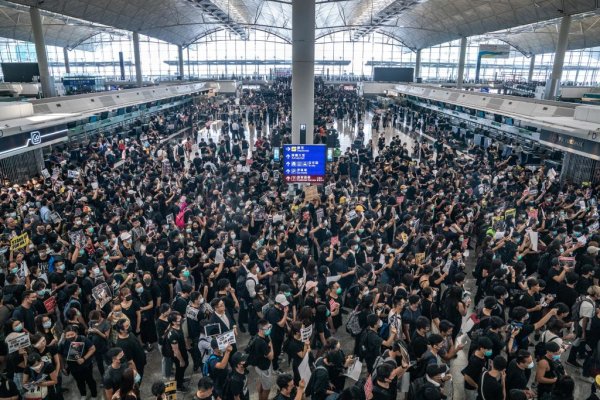 Flights Are Still Being Canceled At Hong Kong's Airport Amid Protests. Here's What Travelers Should Know
Next Up: Editor's Pick