Riot police clashed with demonstrators who defied a ban and staged a march through downtown Hong Kong Saturday to call for greater political freedom.

In the late afternoon, live news footage showed police using water cannon and tear gas on protesters gathered at the government headquarters and Legislative Council, after they hurled petrol bombs and rocks at the complex and appeared to be making an attempt to storm it.

At night, and with clashes ongoing, local media reported that an officer fired a live round as a warning in the city’s Victoria Park.

The latest unrest comes after a dramatic 48-hour period in which police arrested high-profile activists and pro-democracy lawmakers, and three masked men attacked an off-duty police officer, wounding him badly.

Beijing also stepped up its condemnation of the crisis gripping Hong Kong, with communist party mouthpiece The People’s Daily warning on Saturday that Hong Kong had entered a “critical moment.”

Crowds gathered at a sports ground from early Saturday afternoon, purportedly to hold a prayer meeting, for which police permission is not required. However, before long sections of the crowd broke off and took to the streets. Live news footage showed them filling major thoroughfares leading to the city’s financial center, where their numbers swelled.

The mostly young male protesters — many in full balaclavas — chanted “Revolution of our times!” and “Freedom for Hong Kong!”

At around 2:30 p.m., riot police could be seen blocking the road to Government House, preventing hundreds of protesters from marching on the official residence of Hong Kong’s beleaguered top official, Chief Executive Carrie Lam.

A short time later, protesters erected barricades in Causeway Bay, one of Hong Kong’s busiest shopping quarters, and occupied major roads in the business and administrative districts, as retailers brought their shutters down and a government helicopter hovered overhead. Several hours of intense clashes ensued, with protesters setting fire to barricades and lobbing petrol bombs.

The latest disturbances will reinforce perceptions that Lam’s administration is losing its ability to direct the situation, after three months of unrest that has seen the legislature ransacked once already, the airport shut down for two days by protesters, and emblems of the Chinese state defaced. Lam herself has kept a low profile during the crisis and her half-hearted offers of dialogue have been scorned by the democracy movement.

The arrest among others yesterday of prominent campaigner Joshua Wong and his party colleague Agnes Chow, both 22, has meanwhile hardened battle lines in the former British colony, whose 7.2 million people are culturally and linguistically distinct from mainland Chinese after 156 years of U.K. rule.

After being bailed on charges of inciting and organizing unauthorized assembly, Wong told local media, “We still continue our fight. We shall not surrender.”

Hong Kong’s unrest began as opposition to an unpopular extradition bill, but has since boiled over into a rebellion against the unrepresentative local government, with many protesters calling for self-determination or even independence.

China has threatened to intervene if the semi-autonomous enclave—returned to Chinese sovereignty in 1997—does not quell what Beijing terms a “color revolution.” Earlier this month, Chinese state broadcaster CCTV quoted a senior official overseeing Hong Kong affairs as saying that “the central government will never sit idly by if the situation in Hong Kong worsens” to a point where the Hong Kong government cannot control it.

Beijing has recently made well-publicized deployments of anti-riot vehicles in Hong Kong and of paramilitary units on the territory’s border. 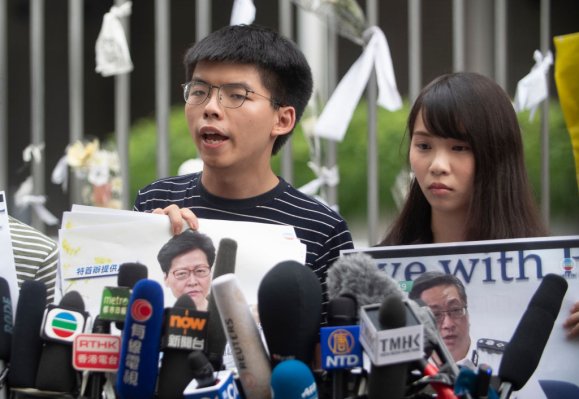