Climate Change Is Likely to Devastate the Global Food Supply. But There's Still Reason to Be Hopeful

A couple of urban farmers organising crates of freshly harvested fruits and vegetables on a truck, ready to take them to market.
Tom Werner—Getty Images
Ideas
By Amanda Little
Amanda Little is a professor of journalism and science writing at Vanderbilt University and the author of The Fate of Food: What We’ll Eat in A Bigger, Hotter, Smarter World.

The most troubling paradox of the 21st century may be that human population is expected to climb to 9.7 billion by midcentury — yet the global food supply is predicted to plummet. The Special Report on Climate Change and Land released earlier this month by the United Nations’ International Panel on Climate Change, penned by experts in more than 50 countries, details in stark terms “the risk to millions of people from climate extremes, desertification, land degradation and food and livelihood insecurity.” Another recent IPCC report predicted a 2 to 6 percent decline in global crop yields every decade going forward — that’s potentially millions of acres phasing out annually — due to drought, heat, flooding, superstorms, weather volatility, shifting seasons, insect infestations and other symptoms of a warming planet.

According to Jerry Hatfield, the director of the U.S. Department of Agriculture’s National Laboratory for Agriculture and the Environment, the single biggest threat of climate change is the collapse of food systems: “Other threats — flooding, storms, forest fires — may be more sudden and severe in certain regions, but disruptions in food supply will affect virtually everyone.”

For most of us, this still feels like an abstract problem. The industrialized world on the whole is enjoying a more abundant, diverse and accessible food supply than ever before in human history. The supermarket that’s located a few hundred feet from my house is open 19 hours a day, seven days a week, and stocks more than 50,000 distinct food items deriving from countries as far-flung as Zimbabwe. Many of us are more worried about too many food options, not too few of them.

But disruptions in supply are already evident almost everywhere food is grown. Last month, the heat wave that swept Europe scorched old vineyards and new cornfields alike. When Bordeaux reached a record 106 degrees Fahrenheit, France’s Minister of Agriculture said the country’s coveted wine production would decline up to 13 percent in 2019. The soy and corn farmers in the American Midwest, meanwhile, faced a very different problem: sodden fields from unusually heavy spring rains were too wet to plant, resulting in billions of dollars of lost crops. Climatic pressures in recent years have also damaged or destroyed millions of acres of olive groves in Italy, citrus and peach orchards in Florida and Georgia, apple and cherry orchards in Wisconsin and Michigan, avocado farms in Mexico, coffee and cacao farms in dozens of equatorial nations. Water-intensive dairy and livestock operations are suffering the world over.

While threats to food production are varied and region-specific, a single story connects them: Climate change is becoming something we can taste. This is now a kitchen-table issue, literally and otherwise.

Climate change also intensifies the existing problems in industrial food production, many of which are (in an ironic twist) themselves root causes of climate change. Food waste, for example: more than a third of all food grown globally rots on the field or in transit or is thrown out. Rampant soil degradation has lead to the overuse of synthetic fertilizers that, in turn, evaporate into the air to form nitrous oxide, a potent greenhouse gas. Pesticides have been causing mass die-offs of bees that play Oscar-caliber supporting roles as pollinators in food production; now climate change is making life even harder for these beneficial insects.

What, we must wonder, lies ahead? Will future historians look back on our current agricultural moment and see it as Dickens did Europe in the late eighteenth century—an age of belief and incredulity when “we had everything before us, we had nothing before us”?

We have good reason to believe we’re headed toward nothing. By the middle of this century, a 2014 IPCC report reads, the world may reach “a threshold of global warming beyond which current agricultural practices can no longer support large human civilizations.” But that fate hinges on a key assumption — that current agricultural practices won’t change. And if my research has taught me anything, it’s that farmers, scientists, activists and engineers the world over are radically rethinking food production.

I spent the past five years exploring the lands, minds and machines, working on the future of food, traveling from small apple orchards in Wisconsin and tiny cornfields in Kenya to massive Norwegian fish farms and computerized foodscapes in Shanghai. I investigated new and old ideas, from robotics, CRISPR, alternative meats and vertical farms to edible insects, permaculture, fertilizer management and ancient plants. I learned through research in more than a dozen countries and as many states that human innovation, which marries new and old approaches to food production and land management, can build climate resilience and redefine sustainable food on a grand scale. 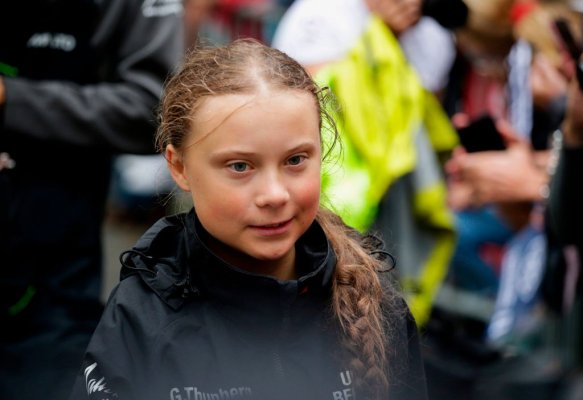 Greta Thunberg Arrives in N.Y. After Sailing Across Atlantic
Next Up: Editor's Pick