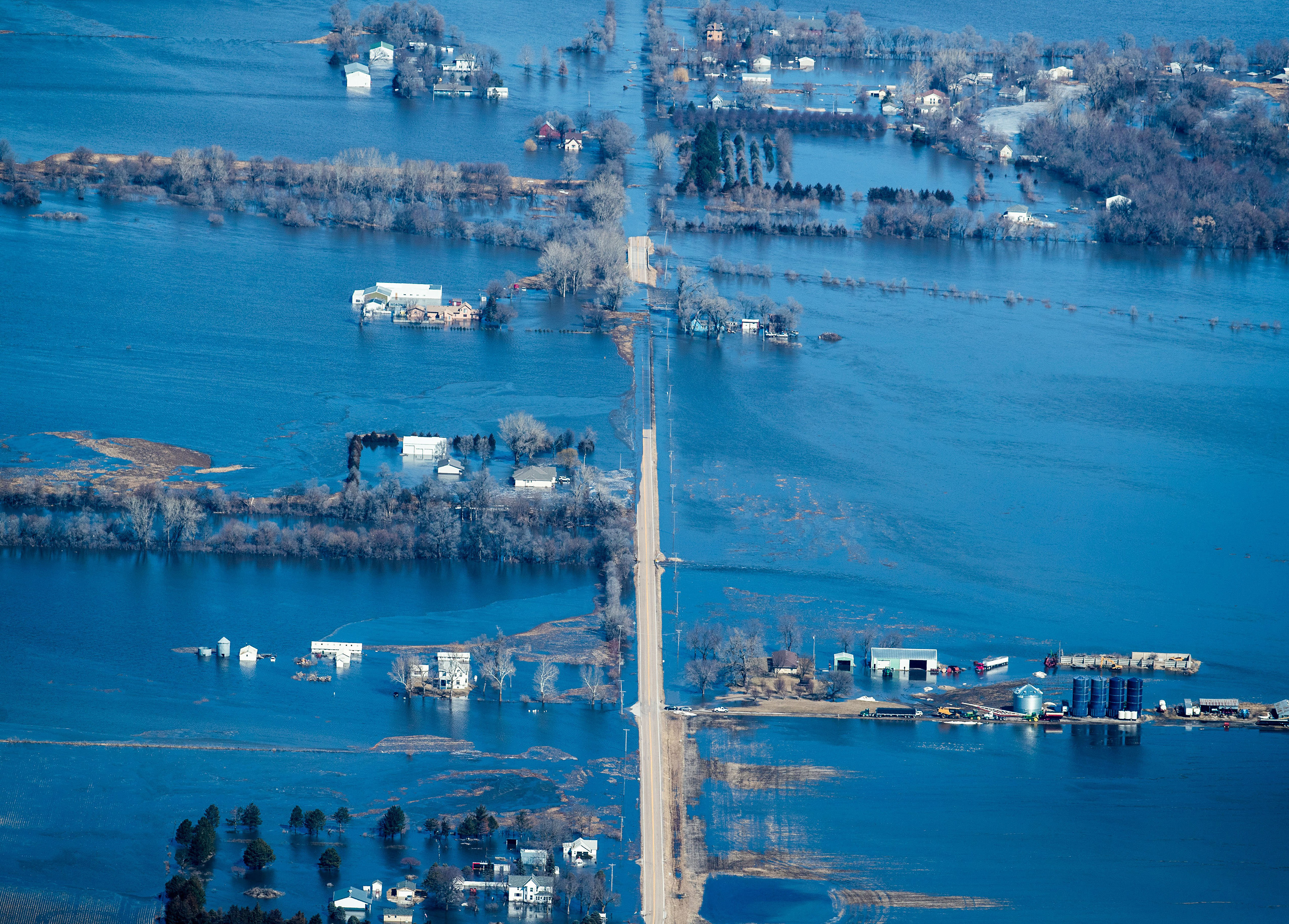 By Maïa Booker and Wilder Davies

The Midwest is facing even more “historic and catastrophic flooding,” according to the National Weather Service in the wake of a bomb cyclone that dumped unusual amounts of snow and rain across the region last week.

Iowa Gov. Kim Reynolds has included 41 of Iowa’s 99 counties in her state disaster declaration, according to the Associated Press. Several rivers in the region — including the Missouri and the Mississippi — have swelled to dangerous levels, flooding small towns and breaching more than a dozen levees.

Three people have died as a result of the floodwaters and two men in Nebraska have been missing since Thursday, according to the Associated Press.

Emergencies have been declared in 74 cities and 65 counties according to the Nebraska Emergency Management Agency, and water levels are expected to rise with more rain expected and snow continuing to melt. According to the National Weather Service, 9 million people across 14 states are still under flood warnings.

Vice President Mike Pence is traveling to the Midwest Tuesday to survey the damage in Omaha, Nebraska, where hundreds of homes have been damaged and tens of thousands of acres covered in water, according to the Associated Press.

Devastation has been particularly concentrated in eastern Nebraska. The Nebraska Emergency Management Agency described the flooding as one of “the most devastating disasters in recent history.” Towns like Fremont have been completely surrounded by water, making relief and rescue efforts particularly challenging.

Pilots have been flying supplies in to people who are stranded, according to local media. Video footage from an airplane show fields and roads in the area completely submerged. Roads and highways have also been severely damaged in areas surrounding the city of Omaha.

The flooding has so far had an estimated cost of $550 million on the public sector in Nebraska and $90 million on private infrastructure.

In Iowa, failing levees in Mills County forced residents to evacuate. Buildings in the towns of Hornick and Pacific Junction were overwhelmed by water, forcing more than 400 people to evacuate, according to the Des Moines Register.

RVs, washed away by the flood waters of the Platte River, are seen in Merritt's RV Park in Plattsmouth, Nebraska, March 17, 2019.
Nati Harnik—AP
At sunrise, Norfolk City Engineer Steven Rames inspects the levy next to the Northeast Community College on March 15, 2019, in Norfolk, Nebraska.
Ryan Soderlin—Omaha World-Herald
Firefighter Brian Farr carries a baby from the boat as the GBFD assisted residents with home evacuations on Crooks Street due to the East river flooding on March 15, 2019 in Green Bay, Wisconsin.
Adam Wesley—The Post-Crescent via AP
Businesses on the southwest side of Hamburg, Iowa, were flooded on March 17, 2019, from the flood waters of the Missouri River.
Ryan Soderlin—Omaha World-Herald
An abandoned car sits on Industrial Highway in flood waters north of Norfolk, Nebraska on March 14, 2019. According to a trooper on scene, the occupant had to be rescued.
Darin Epperly—Norfolk Daily News via AP
A neighborhood in Bellevue, Nebraska, is flooded by waters from the Missouri River, seen here with the Offutt Air Force Base runway.
Nati Harnik—AP/Shutterstock
Luke Thomas and Air Force Tech Sgt. Vanessa Vidaurre look at a flooded portion of Offutt Air Force Base on March 17, 2019, in Bellevue, Nebraska.
Z Long—Omaha World-Herald via AP
More Must-Reads From TIME

Write to Maïa Booker at maia.booker@time.com and Wilder Davies at wilder.davies@time.com.