Their Death Sentences Were Overturned Because of Racial Bias. Now North Carolina Might Leave Them Back on Death Row

Tilmon Golphin left death row when he was 34 years old. Fourteen years earlier, he was found guilty of killing two police officers during a traffic stop. But after his lawyers proved racial discrimination played a significant role in his death sentence, in 2012, a judge re-sentenced Golphin to life without parole.

With that, Golphin moved to a satellite prison where he suddenly had privileges he’d lacked for 14 years, such as access to work tasks or the ability to hug his family. He was even given a lower classification for good behavior.

Golphin and three other inmates — Marcus Robinson, Christina Walters, and Quintel Augustine — who were all on death row for murder committed in Cumberland County, were re-sentenced in 2012 to life without parole under North Carolina’s Racial Justice Act. The 2009 law allowed death row inmates to be re-sentenced if they could prove that race was a significant factor in their sentencing. Golphin, Robinson, and Augustine are African American and Walters is Lumbee and Cherokee Indian. All four had originally, in two separate trials, convinced a judge that racial bias affected their death sentence—not just systematically, but in their individual trials.

“[Golphin] had expectations that [the new prison was] where he would be the rest of his life, but that at least he was treated like a human being and not like someone who was only good for slaughter,” Kenneth Rose, Golphin’s attorney, says.

That’s all changed. All four inmates are now back on death row after a series of legislative and legal proceedings — the Racial Justice Act’s repeal in 2013, a 2015 state Supreme Court ruling that all four cases needed new proceedings to re-hear evidence of racial bias and a judge’s 2017 dismissal of their cases without hearing the evidence. The judge in that case said that because the Racial Justice Act was overturned, the inmates’ racial bias cases should also be dismissed.

This week, their cases will be back before the state Supreme Court. Lawyers for the four defendants will debate that 2017 dismissal. Two other inmates who had filed Racial Justice Act motions before the 2013 repeal will also argue for their right to a hearing.

At the center of the hearings is the question: Could the court dismiss the defendants’ cases because the law was repealed? They had already filed motions, and in the case of Golphin, Robinson, Walters and Augustine, won their claims before at least one judge.

“The question before the court now is, ‘What do we do about all this evidence of race discrimination?’” says Gretchen Engel, a lawyer for Burke and Augustine.

Lawyers for the inmates say the dismissal violated the defendant’s constitutional rights. The State says it was legal and there are other avenues besides the Racial Justice Act for defendants to present evidence of racial discrimination, such as protections under the North Carolina constitution. (The Cumberland County District Attorney’s office and the North Carolina Department of Justice declined interview requests citing the ongoing legal proceedings).

“[The defendants] have an issue that’s got some traction societally, and it’s got some emotional resonance,” says Jeffrey Welty, a professor of public law and government at the University of North Carolina’s School of Government. “[But] the challenge is finding the legal pathway to walk to allow those issues to gain traction in court,” he says.

The origins of the Racial Justice Act

In 2009, the then-Democratically controlled North Carolina state legislature passed the Racial Justice Act, which said a death penalty could be converted to life without parole if “race was a significant factor in seeking or imposing the death penalty within the county, the prosecutorial district, the judicial division, or the state.”

Michigan State University College of Law then conducted a study of North Carolina’s capital cases, and found that between 1990 and 2010, North Carolina prosecutors struck qualified black jurors more than twice as often than they did white jurors. In 1986, the Supreme Court ruled in Batson v. Kentucky that it is unconstitutional to exclude jurors based solely on race. The court upheld that ruling earlier this year 7-2 in Flowers v. Mississippi, a case that involved a prosecutor with a history of racial discrimination striking nearly all the potential black jurors.

In the 30 years since the Batson decision, North Carolina appellate courts have never ruled in favor of a Batson claim, meaning they have never ruled that racial discrimination occurred during jury selection and Batson was violated. It’s an outlier in the American South: South Carolina has found at least a dozen since 1989, Alabama has found over 80, and Mississippi and Arkansas each have found at least 10. “It is embarrassing, and it is one of the reasons why [racial discrimination] continues,” Richard Rosen, a professor of law emeritus at the University of North Carolina School of Law who worked on an amicus brief for the defense, says. “Our trial judges have been lax about enforcing it.”

But the 2009 Racial Justice Act’s allowance for the use of these systemic statistics, particularly the study about eliminating jurors based on race, was controversial. Republicans argued the law would function as a work around for the death penalty, allowing nearly every inmate to receive relief. They pointed to the fact that a majority of the then-over 150 inmates on death row in North Carolina had filed claims (North Carolina’s death row currently has 142 inmates, and over half are people of color.) In 2012, the then-Republican controlled legislature amended the law, limiting the use of statistics.

Criminal justice experts, however, dispute the degree to which state-wide statistics affected appeals under the Racial Justice Act. “It specifically allows statistical evidence to be used. It doesn’t mean, for instance, if you find statewide racial discrimination, that every defendant is going to get relief,” says Rosen. “It just allows consideration of statistical evidence.”

The evidence presented to get re-sentenced

In each of Golphin, Robinson, Walters, and Augustine‘s cases, a judge in 2012 ruled in their favor, citing not only evidence of systemic statewide and countywide racial bias, but also evidence of racial bias in each individual case, particularly during jury selection.

In Golphin’s case, according to a brief filed by his lawyer, an African American juror named John Murray told the court during jury selection that he overheard two white jurors behind him say Golphin and his brother—also African Americans—“should have never made it out of the woods.” Jeffery Robinson, the deputy legal director at the ACLU, tells TIME the statement seems to suggest that Golphin should have been lynched.

After reporting this comment, the State struck Murray from the jury. In total, the prosecution removed five of the seven qualified African Americans. Golphin was ultimately sentenced by a jury of 11 white jurors and one African American.

In Christina Walters’ case, prosecutors struck 10 of the 14 qualified black jurors, according to her appellate brief.

And for Quintel Augustine, prosecutors described jurors with similar characteristics differently based on their race in handwritten notes, according to his appellate brief. One note described a black man who drank as a “blk. Wino,” but a white man who drank as a “country boy—OK,” the document says.

The two defendants who were awaiting an evidentiary hearing, Rayford Burke and Andrew Ramseur, also pointed to evidence of racial discrimination. According to Burke’s brief, a prosecutor called him a “big black bull” in closing arguments.

After Republicans won North Carolina’s state legislature and governorship in 2012, the state legislation voted to repeal the Racial Justice Act — and Governor Pat McCrory signed the repeal into law the following year.

In the election cycle, the Republican Party of North Carolina campaigned on the Racial Justice Act, suggesting the law would allow a convicted murder to move next door. (This was false; they all were sentenced to life without parole.) McCrory also said the repeal impeded on the decisions of unanimous juries.

Senator Thom Goolsby, the repeal bill’s primary sponsor, told the News & Record at the time that the RJA was “nothing but an end run around capital punishment in North Carolina.” He also argued the state had a “moral obligation” to victims to carry out executions.

That repeal is significant for the inmates’ cases, says Welty of UNC, because for these defendants to be able to air their evidence of racial discrimination under the Racial Justice Act, they first need to prove that the repeal didn’t apply to them.

Theodore Shaw, the Director of the Center for Civil Rights at UNC School of Law, says one of the reasons the case itself matters so much is the role North Carolina plays in discussions about race in the U.S. Nationwide issues around race often play out in North Carolina, such as debates over Confederate monuments, gerrymandering and voter ID laws. “The Tar Heel State” has a long history of slavery and Jim Crow segregation, and is one of the few swing states in the American South.

“People are watching these cases to see how much progress has been made in North Carolina,” he says. “And nationwide.” 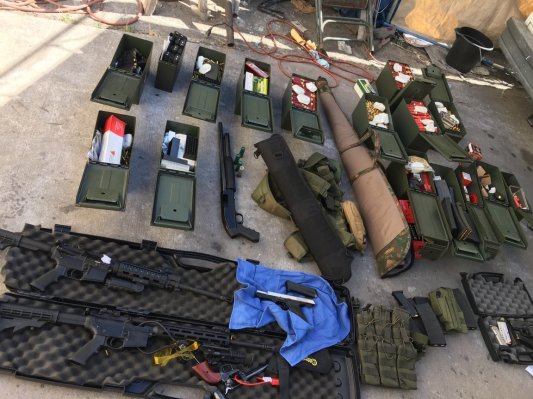 Have Police Really Thwarted More Mass Shootings Since El Paso and Dayton, or Are We Just Paying Closer Attention?
Next Up: Editor's Pick