Flights Are Still Being Canceled At Hong Kong's Airport Amid Protests. Here's What Travelers Should Know

Thousands of anti-government protesters continued their occupation of Hong Kong’s airport into Tuesday, in an act of civil disobedience that has caused hundreds of flights to be delayed or canceled, causing travel chaos.

All departures from Hong Kong International Airport were canceled on Monday evening, and arrivals faced delays — though officials said inbound flights already on their way would be allowed to land. By Tuesday, some flights were able to depart the airport, though others were cancelled and still more were delayed. On Tuesday afternoon, authorities were forced to suspend check-ins for the second day in a row.

Protesters occupied the airport — one of the world’s busiest and a major regional hub — in defiance of police who they accuse of brutality. On Sunday, police fired tear gas at crowds inside a subway station, and charged at protesters on an escalator. One woman had been hit in the eye with a tear gas canister. There were also reports of undercover police dressing as protesters in order to make arrests.

The demonstrations in Hong Kong are now into their tenth week. They began as opposition to a controversial extradition law, but have morphed into wider resistance against encroaching control from Beijing, which many Hong Kong residents see as an authoritarian threat to their comparatively open society.

Here’s what to know if you’re scheduled to travel to or from Hong Kong today.

How long will flights be canceled for?

On Tuesday evening, Hong Kong airport’s website showed many flights canceled, but some managing to depart. Passengers traveling later should keep checking the airport’s departures page and contact their specific airline for advice.

What have airlines said?

“As with all airlines, Virgin Atlantic flights have been affected by protest activity currently taking place at Hong Kong Airport,” Virgin Atlantic said in a statement provided to TIME. “We’d like to apologise to our customers for the delay this will cause and advise anyone due to travel from Hong Kong to check our website for the latest information.” Virgin said passengers could rebook flights with no fees until Aug. 31.

“We apologise to customers affected by the disruption at the airport and we are offering them options to rebook to a different date or to take a full refund,” British Airways said in a statement. British Airways passengers are able to change their travel until Aug. 26.

Is it still safe to go to Hong Kong?

Hong Kong authorities have hinted that the police crackdown could yet become more violent.

“In recent days, Hong Kong’s radical protesters have repeatedly attacked police with highly dangerous tools, which constitute serious violent crimes and have started to show signs of terrorism,” said a spokesperson for the Chinese government on Monday. “This type of violent criminal activity must be resolutely combated according to the law, with no hesitation or mercy.”

There will be “no leniency or mercy,” the spokesman added. 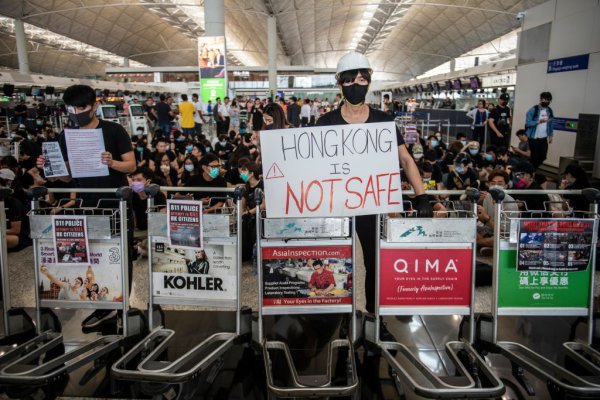 Hong Kong Protests Shut Down Airport
Next Up: Editor's Pick