Outbound travel was suspended at Hong Kong’s international airport Monday afternoon as thousands of black-clad protesters flooded the terminal, mobilized by anger over a night of police violence that left the inside of several subway stations clouded with tear gas and multiple demonstrators seriously injured.

Sunday night marked a shocking escalation as anti-government protests entered their tenth consecutive week, when a young woman believed to be a volunteer medic was reportedly blinded in one eye after being hit with a projectile. Elsewhere in the city, police were captured on video apparently firing crowd control weapons toward protesters at point-blank range in enclosed spaces. Officers were also seen chasing people down moving escalators while swinging batons.

Volleys of tear gas were fired inside at least two mass transit stations, exposing both protesters and bystanders to the noxious gas. As demonstrations popped up in several neighborhoods, police were accused of disguising themselves as protesters and making arrests. One viral video appeared to show a plainclothes man kneeling on the neck of a young protester, bleeding profusely onto the sidewalk as he pleaded for the man to stop.

“Yesterday’s police operation was ridiculous,” said Nicekayla, a 27-year-old retail worker who, like many of the protesters, declined to use her real name for fear of arrest. “I was supposed to work today, but I took leave. I hope the government will hear us.”

By late afternoon, demonstrators had filled both the arrivals and departures halls, blocking passengers from accessing the security checkpoint. Dressed in the black T-shirts and dust masks that have become the de facto uniform of the movement, the visibly angry crowd chanted slogans such as “an eye for an eye!” — a reference to the young woman whose blood-drenched face became iconic overnight. Many wore patches of gauze over their right eyes.

“I came out today to reject the government in Hong Kong and and the police violence,” said Matthew, 22, a protester who works in IT. “What we saw on the TV yesterday, police using whatever violence that can be used, this is insane.”

Protests in the Asian financial hub show no sign of abating. In recent weeks, violence has escalated by both authorities and a small core of radical protesters launching bricks, Molotov cocktails and other projectiles toward police lines. The government has so far responded by authorizing ever more force, galvanizing public anger and widening distrust of authority at a time of crisis.

Also on Monday, journalists and lawmakers were invited to observe as Hong Kong police demonstrated how they would use armored vehicles equipped with water cannons, which Amnesty International has warned could result in serious injuries on the city’s densely populated streets.

The protests were sparked in response to a government proposal that would have allowed the transfer of fugitives to mainland China, but soon spiraled into a larger movement demanding more democracy in the semi-autonomous region of China. The city’s leader, Chief Executive Carrie Lam, has suspended the offending legislation but refuses to officially withdraw it.

Protesters are demanding full withdrawal of the bill, amnesty for all demonstrators arrested in relation to the unrest, a retraction of the government’s characterization of the protests as “riots,” an independent inquiry into allegations of police use of force, and the implementation of universal suffrage, which is promised in the territory’s charter. 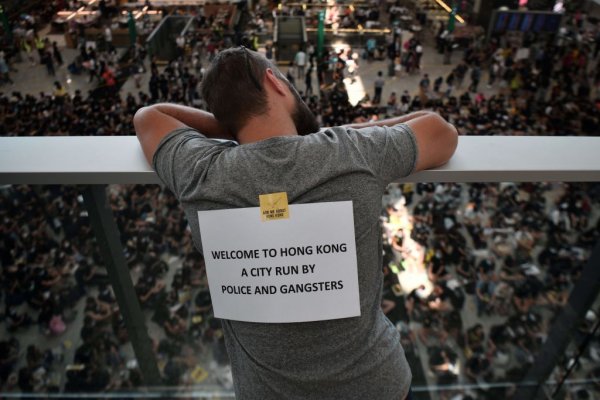 Hong Kong Protesters Converge on the International Airport
Next Up: Editor's Pick