President Donald Trump condemned racism and white supremacy in the wake of two mass shootings that left more than 30 people dead. But experts in presidential rhetoric say his message was undermined by his own racist rhetoric and divisive comments in the past.

“In one voice, our nation must condemn racism, bigotry and white supremacy,” Trump said Monday, speaking under a portrait of George Washington in the White House Diplomatic Room. “These sinister ideologies must be defeated. Hate has no place in America.”

It is the idea of “one voice” that makes Trump’s controversial past comments so important, argues Kathleen Hall Jamieson, a professor at the University of Pennsylvania’s Annenberg School for Communication, because the president is the only person in government who is empowered to speak for the whole country.

“When a president says we must speak in one voice, and the voice that he is speaking in is the voice he also was speaking in when he said things that were racist and bigoted, one should ask, have you decided to now reform your rhetoric?” Jamieson said. She added: “It’s particularly important in moments when the country needs to come together around a national tragedy. Donald Trump has effectively forfeited his right to do that because of the language he has used in the past.”

Two mass shootings rocked the nation over a span of less than 24 hours over the weekend. Twenty-two people were killed in a shooting at a Walmart in El Paso, Texas, on Saturday and nine victims were fatally shot in Dayton, Ohio, early on Sunday. The El Paso shooting suspect may have posted a manifesto online shortly before the attack filled with anti-Hispanic sentiment. Police have said they are working to confirm whether the suspect authored it.

Trump expressed the “condolences of our nation” to Mexico in his remarks Monday morning for the Mexican nationals who were killed in El Paso. But the signature goal of his presidency has been to build a wall on the border between the U.S. and Mexico, a project he promotes with inflammatory statements about undocumented immigrants coming into the United States.

“When Mexico sends its people, they’re not sending their best,” he said on the day he announced his presidential campaign in 2015, saying some of those crossing the border were “rapists.”

“How do you stop these people? You can’t,” Trump said at a May 2019 rally in Panama City Beach, Fla. When someone in the crowd yelled back, “Shoot them,” Trump joked, “Only in the Panhandle can you get away with that statement.”

Vanessa Beasley, a professor of communication studies at Vanderbilt University who is an expert on presidential rhetoric, said those moments make it harder for Trump to talk about unifying the country now.

“The reason there’s going to be a credibility issue there is because he’s spent so much time to date as president remaining engaged in campaign rhetoric,” she said. “And his campaign rhetoric is characteristically us versus them.”

Read More: Watch Donald Trump Talk About ‘Us’ and ‘Them’

Trump called a group of Latino migrants heading to the Southern border in 2018 “an invasion.” The online screed potentially linked to the El Paso shooting suspect referred to a “Hispanic invasion of Texas.” (The manifesto author explicitly clarified that he has held his views since before Trump’s political rise.)

The word “invasion” is part of a racist rhetorical tradition of “code language,” said Michael Cornfield, a professor at The George Washington University Graduate School of Political Management. “[Trump] is not using explicitly terms associated with race,” Cornfield said. “But you know what he means, and everybody knows what he means.”

Trump’s comments after the shootings came with two fights still particularly fresh in the country’s mind: his tweets about Baltimore and Rep. Elijah Cummings, and his attacks on a group of four congresswomen of color, Rep. Alexandria Ocasio-Cortez of New York, Rep. Ayanna Pressley of Massachusetts, Rep. Rashida Tlaib of Michigan and Rep. Ilhan Omar of Minnesota.

On July 27, Trump tweeted that Cummings is a “brutal bully” and that his Baltimore district is “a disgusting, rat and rodent infested mess.”

Responding to a question about people calling him racist after his fight with Cummings, Trump said, “I’m the least racist person there is in the world.”

On July 14, Trump tweeted that the four congresswomen should “go back and help fix the totally broken and crime infested places from which they came.” Days later, a crowd at a Trump rally in North Carolina chanted “send her back” when talked specifically about Omar. Three of the women were born in the United States; Omar came to the U.S. from Somalia when she was a child and is an American citizen.

Monday’s remarks after the El Paso and Dayton shootings aren’t the first time Trump has denounced white supremacy in the wake of violence. In August 2017, after violent clashes with white supremacists in Charlottesville, Virginia, left one woman dead, Trump blamed the “alt-right” and neo-Nazi groups for the violence, but then equivocated. “I think there is blame on both sides,” he said during a news conference days after the deadly conflict. “You had a group on one side that was bad and you had a group on the other side that was also very violent. Nobody wants to say it, but I will say it right now.”

“He hasn’t really been a consoler,” Cornfield said about Trump’s speech in times of national crisis. “This kind of language, which we do associate with the presidency — it’s one of their undefined but socially expected roles — would be new to him.”

“Donald Trump is responsible for this,” New Jersey senator and presidential candidate Cory Booker said on CNN. “He is responsible because he is stoking fears and hatred and bigotry.”

“What do you think? You know the shit he’s been saying. He’s been calling Mexican immigrants rapists and criminals. I don’t know, like, members of the press, what the fuck? Hold on a second. You know, I — it’s these questions that you know the answers to,” Beto O’Rourke, a former congressman from El Paso who is now running for president, said in a heated exchange with a reporter who asked if there was anything the president could do to make the situation better, according to a CNN transcript of the exchange. “I mean, connect the dots about what he’s been doing in this country. He’s not tolerating racism, he’s promoting racism. He’s not tolerating violence, he’s inciting racism and violence in this country.”

Trump’s 2020 campaign forcefully pushed back on Democrats’ criticisms and the idea that Trump’s own language has contributed to the environment that gave rise to violence.

“It is shameful that Democrats are unable to prevent themselves from politicizing a moment of national grief,” Tim Murtaugh, Trump’s 2020 campaign communications director, told TIME in a statement. “The President clearly condemned racism, bigotry, and white supremacy as he has repeatedly. No one blamed Bernie Sanders when one of his campaign volunteers launched an assault on the Republican Congressional baseball team to ‘kill Republicans.’ No one blamed Alexandria Ocasio-Cortez when the ICE facility attacker used rhetoric identical to hers as justification. The responsibility for such horrific attacks lies ultimately with the people who carry them out.”

The White House did not respond to a request for comment.

But it is President Trump’s own past comments that put this moment, and his condemnation of racism, in the spotlight, experts say. “He’s making a statement that if any other person who was president had made, that would be unremarkable,” Jamieson said. “But Trump says it and you say, really? And what were all those other statements of yours about?” 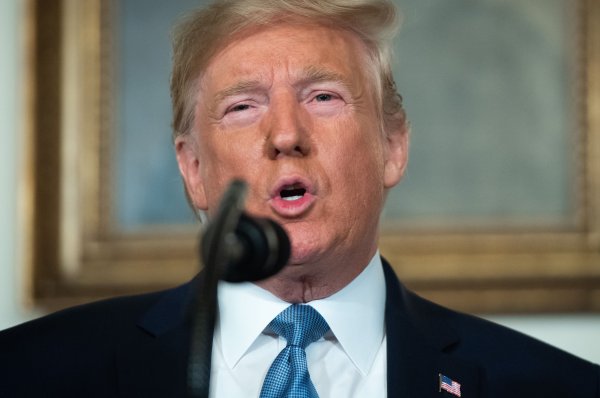 Trump Blames Everything But Guns
Next Up: Editor's Pick