Cardi B And Bernie Sanders Partnered For A Campaign Video. Here's What We Know

Grammy award-winning rapper Cardi B shared a photo of herself on Instagram having a conversation with presidential candidate Sen. Bernie Sanders on Monday night, announcing that she sat with the Senator to ask him questions submitted by her fans.

“Stay tuned to see how he will fight for economic, racial, and social justice for all,” she wrote in her Instagram post. “Together, let’s build a movement of young people to transform this country.”

On Monday, Sanders told CNN in Detroit ahead of the Democratic debates beginning Tuesday that he and Cardi B, who has supported him since 2016, were partnering on a campaign video targeting young people.

“We (are) working on a way to involve more young people in the political process,” Sanders told CNN. “The future of America depends on young people. They are voting in large numbers, but not large enough numbers.”

Cardi B has been politically vocal throughout her career, including famously questioning how her tax money is being spent and publicly criticizing President Trump during a 34-day government shutdown over border wall funding.

She has also been a vocal supporter of Sanders, who has embraced her support, despite her sometimes controversial history — Cardi B admitted to drugging and robbing men after a video of her resurfaced on Instagram.

CNN reports Cardi B and Sanders met at TEN Nail Bar in Detroit, a black woman owned business, and that the pair discussed issues like student debt, climate change and the minimum wage.

Cardi B has encouraged her fans on social media to get to know all of the Democratic candidates for president.

“Dear bloggers, dear YouTubers, dear influencers, we have the power to influence our youth to get educated when it comes to our Democratic candidates,” Cardi Bi said in a Sunday video on Instagram. “This man [Trump] has a big chance of winning in 2020, and we can change that.” 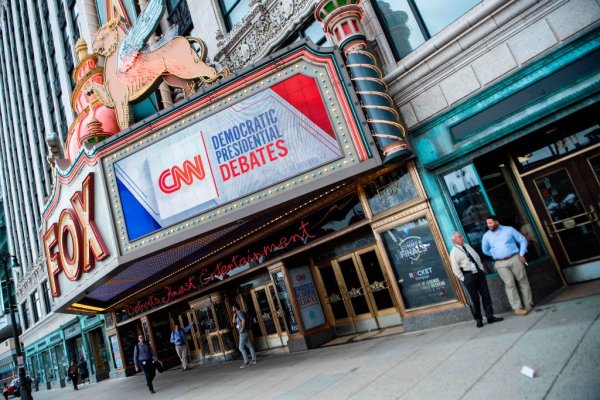 2020 Democratic Debate: All About Trump's Racist Tweets
Next Up: Editor's Pick