Corruption, Cover-Ups and the Shocking Presidential History to Remember as Robert Mueller Testifies

In 1974, when Congress was considering the impeachment of President Richard Nixon, John Doar, chief counsel of the Impeachment Inquiry of the House Committee on the Judiciary, had a question. He wanted to know how Nixon’s behavior compared with that of his predecessors and how the Nixon Administration’s responses to the charges of misconduct it faced stacked up against the responses of previous administrations, from George Washington’s through Lyndon Johnson’s.

I was one of the historians who, under the leadership of Yale historian C. Vann Woodward, took on that assignment. No accounting of presidential misdeeds yet existed. In response to Doar’s request, we created a record against which each president could be compared. Our hope was that a full accounting of presidential misconduct — from the start of American constitutional government through the most recently completed presidency — would allow Americans to measure the current administration against its predecessors.

But Nixon’s resignation rendered our report irrelevant for Congress’ use. The President stepped down just a few weeks after we finished our work, so there was no time for it to be formally included in the committee’s work. Most people, including historians, have never heard of it.

In the last year, inspired by the current President, whose acts are believed by many to defy the rule of law, an expanded look at presidential misconduct seemed timely and necessary. So, to bring the record of presidential malfeasance up to date, I organized a group of historians — long before the release of the Mueller Report, about which Robert Mueller is scheduled to testify before the House Judiciary Committee on Wednesday — to extend the 1974 account through Barack Obama’s Administration.

What does this expanded account, stretching back 230 years, reveal? Not surprisingly, it tells us that serious misconduct by presidents and their senior officials has from the start marked the record of the American state.

Much of that corruption has been driven by the common temptations of avarice and power. Outright greed is misconduct’s most common seedbed. As early as 1792, during Washington’s presidency, former Assistant Treasury Secretary William Duer bilked the Treasury of $250,000 and, through insider trading, caused a financial panic. At roughly the same time, the Army’s ranking general, James Wilkinson, lined his pockets with Spanish gold in return for attempting to split the infant union. Later, in the 1870s, another notorious scoundrel, Orville Babcock — whom President Ulysses Grant couldn’t bring himself to get rid of — repeatedly swindled the Treasury of tax revenue. And oilmen bribed President Warren Harding’s Secretary of the Interior Albert Fall for access to federal petroleum reserves at Teapot Dome and Elk Hills in the 1920s. Fall became the first cabinet member to serve a prison term.

Federal officials have also sought to realize, by illegal means, policy ends they couldn’t otherwise achieve. In the 1840s, President John Tyler and his Secretary of State Daniel Webster used funds designated for national initiatives abroad to pay agents at home to influence public opinion about border negotiations with Canada. Similarly, in the 1980s, Ronald Reagan’s Administration illegally and secretly diverted funds from arms sales to Iran to the Contra movement that warred against a left-wing regime in Nicaragua.

Cover-ups have also been numerous. Nixon’s are notorious. More recently, after President Bill Clinton had an affair with White House intern Monica Lewinsky, the House of Representatives approved articles of impeachment charging that he lied under oath and obstructed investigation of the accusations. (The House voted to impeach him, but the Senate declined to convict and remove the president.) Many chief executives, like Clinton, have fallen into the trap of thinking that claims of executive privilege will protect them, even though congressional probes, court decisions and investigative journalism can, and frequently do, reveal the facts presidents try to hide.

And garden-variety corruptions of politics have been the most frequent of all. Until the federal civil service was reformed after 1883, federal positions were routinely handed out to presidents’ backers. President Andrew Jackson’s infamous “spoils system” of the 1830s was nothing compared to the later outright sale of federal offices, or to party assessments levied against office holders as a condition of employment. Until rules for federal contracting were instituted, single-bid federal contracts were often the yield of campaign contributions, while federal officials benefited from kickbacks on contracts their offices signed.

Inattentiveness and naiveté have snared presidents more often than anything else. Presidents Grant, Harding and Harry Truman allowed themselves to be taken advantage of by ill-chosen cronies. And high standards have done little good when not enforced.

So what are we to make of the overall record? Serious misconduct has ensnared both major parties, but conduct hasn’t seemed to worsen over time: Unusually corrupt administrations have been spaced, not clumped. Perhaps we should take comfort that executive branch malfeasance has been less frequent, deep and widespread than it might have been.

Those conclusions held true in 1974, as they do today. Yet, in one critical respect, this updated report is more troubling than the earlier one.

Our first report covered history through the Johnson presidency, and stopped short of Nixon. That meant it covered presidents who, knowing of their subordinates’ misdeeds, shared responsibility for their administrations’ misconduct. It was only with Nixon that the President and his aides planned and orchestrated corrupt activities directly from the Oval Office. That distinction is a crucial one.

The new edition runs through the Obama years. Nixon is the only President covered in it who was named an unindicted co-conspirator in a court filing. But recently, another White House occupant (“Individual 1”) has also been similarly identified in a federal case in the Southern District of New York. As for whether any misconduct originated in that current President’s office, Mueller’s report stopped short of determining whether or not his actions constituted criminal conduct — but already, before he says a word of new testimony, Mueller has named several instances in which Donald Trump or his inner circle misled the public.

No one can say conclusively how this presidency, not yet completed, will rank on a misconduct scale. But we won’t have to wait 45 years to answer that question. Historians’ accountings, plus the Mueller Report, help provide the evidence on the basis of which all Americans can decide it for themselves.

James M. Banner Jr., a Washington, D.C., historian, is the editor of Presidential Misconduct: from George Washington to Today published in July by The New Press. 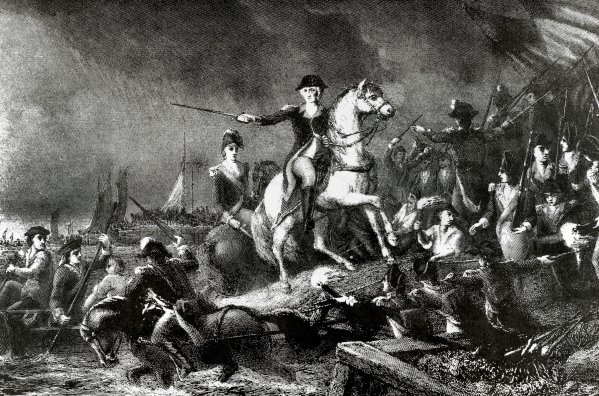 The Maryland 400 Lost a Battle But Helped Win a War. On the 4th of July, We Should Remember Their Sacrifice
Next Up: Editor's Pick