Despite Evidence, Robert Mueller Would Not Say Whether Trump Obstructed Justice. Here's Why

Special Counsel Robert Mueller found significant evidence that Donald Trump may have obstructed justice, but he declined to charge him based on his view of how the law should work.

In a 400-page report sent to Congress Thursday, the former FBI director spelled out a view of the constitutional limitations placed on prosecutors which guided his decision-making in not charging Trump.

At the same time, he plainly stated that if he could have said that Trump was innocent of obstruction of justice, he would have done so.

“The evidence we obtained about the President’s actions and intents present difficult issues that prevent us from conclusively determining that no criminal conduct occurred,” Mueller wrote. “Accordingly, while this report does not conclude that the President committed a crime, it also does not exonerate him.”

The report details several examples of conduct which might be considered obstruction of justice, including Trump pressuring FBI Director James Comey to drop an investigation into his national security advisor, firing Comey, attempting to urge Attorney General Sessions to undo his recusal from the investigation and attempting to fire Mueller, among other things.

Despite Mueller’s decision, Attorney General William Barr and Deputy Attorney General Rod Rosenstein announced in late March that after reviewing the evidence they had decided that Trump did not obstruct justice.

Here’s a look at the legal reasoning behind Mueller’s decision.

A sitting president cannot be indicted

Mueller began by noting that the Office of Legal Counsel in the White House wrote in a 2000 memo that sitting presidents can’t be indicted because it would undermine their ability to oversee the nation’s criminal justice system. But he adds that doesn’t mean that a special counsel couldn’t investigate a presidential actions, since charges could be brought after they’ve left office.

“Given those considerations, the facts known to us, and the strong public interest in safeguarding the integrity of the criminal justice system, we conducted a thorough factual investigation in order to preserve the evidence when memories were fresh and documentary materials were available,” he wrote.

Read More: Can Trump Be Indicted? What to Know About His Legal Powers

Mueller then notes that defendants have a constitutional right to clear their name of criminal accusations through a speedy trial. By contrast, if prosecutors were allowed to impugn their reputations without charging them with crimes, it would be unfair.

“The ordinary means for an individual to respond to an accusation is through a speedy and public trial, with all the procedural protections that surround a criminal case,” he wrote. “A prosecutor’s judgement that crimes were committed, but that no charges will be brought, affords no such adversarial opportunity for public name-clearing before an impartial adjudicator.”

Read More: The 270 Arguments Trump Made About the Russia Probe

Because Mueller’s team can’t indict Trump, it also can’t give him the opportunity for a speedy trial to clear his name, Mueller reasoned. He decided that his team would therefore not make an announcement that Trump had committed a crime — such as obstructing justice — despite the facts it uncover.

“The concerns about the fairness of such a determination would be heightened in the case of a sitting President, where a federal prosecutor’s accusation of a crime, even in an internal report, could carry consequences that extend beyond the realm of criminal justice,” he wrote.

Even a ‘secret indictment’ could still leak

Mueller also ruled out another option, which would be to obtain a sealed indictment against presidents that would not become public until after they leave office would not work because they could be leaked.

“‘It would be very difficult to preserve [an indictment’s secrecy,’ and if an indictment became public, ‘[t]he stigma and opprobrium’ could imperil the President’s ability to govern,'” he wrote, quoting the Office of Legal Counsel memo.

Prosecutors could still clear the president, but they declined

All that said, Mueller also said that he did not rule out publicly clearing the President of wrongdoing, either. But based on the facts his investigators uncovered, he decided not to do so.

“If we had confidence after a thorough investigation of the facts that the President clearly did not commit obstruction of justice, we would so state,” he wrote. “Based on the facts and the applicable legal standards, however, we are unable to reach that judgement.”

“Accordingly, while this report does not conclude that the president committed a crime, it also does not exonerate him,” he added. 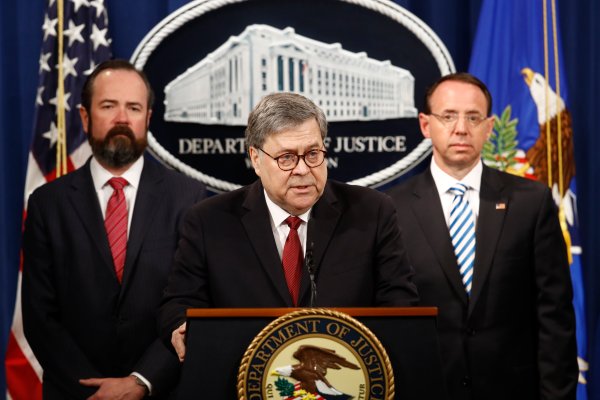 Barr Said Trump Did Not Obstruct Justice. Here's His Reasoning
Next Up: Editor's Pick