Here Are All of the Indictments, Guilty Pleas and Convictions From Robert Mueller's Investigation

Since his appointment in May of 2017, Special Counsel Robert Mueller racked up a lengthy record of court wins, but none of them answered some of the central questions the public had about his investigation into potential collusion between President Donald Trump or his campaign and Russia.

Along with a team of experienced prosecutors and attorneys, the former FBI director has indicted, convicted or gotten guilty pleas from 34 people and three companies, including top advisers to President Trump, Russian spies and hackers with ties to the Kremlin. The charges, which Mueller referenced during his opening statement to the House Judiciary Committee on July 24, range from interfering with the 2016 election and hacking emails to lying to investigators and tampering with witnesses.

But Mueller did not charge or suggest charges for anyone on one of the biggest questions he faced: whether the Trump campaign worked with the Russians to influence the election.

Mueller’s report, which he submitted to Attorney General William Barr on Friday, did not conclude that Trump or anyone involved in his campaign colluded with Russia, according to a summary Barr delivered to Congress on Sunday. (Mueller’s report left open the question of whether Trump obstructed justice in the course of the investigation, according to Barr’s summary.)

Even before Mueller filed his report, he had referred several related cases to career prosecutors in the Justice Department, and may have made other referrals that have not yet become public, though they would not focus on the central parts of his investigation.

According to Barr’s letter to Congress, there were no instances in which Mueller wanted to bring charges against someone but was overruled by the Justice Department.

At least one person was unlikely to face charges from Mueller from the start: Trump himself. Two memos from the Office of Legal Counsel in the Department of Justice, written during the Nixon and Clinton impeachments, take the view that a sitting president is immune from prosecution. (Some argue the memos are wrong about the underlying constitutional issue, but Mueller is unlikely to break with tradition.)

Here’s an overview of all the indictments, guilty pleas and convictions resulting from Mueller’s investigation.

A view of the four-story building known as the "troll farm" in St. Petersburg, Russia on Feb. 17, 2018.
Naira Davlashyan—AP

Mueller’s most sweeping charges are unlikely to lead to any convictions. In 2018, he charged the Internet Research Agency, a Russian troll farm, with meddling in the 2016 election. In an unusually detailed 37-page indictment, he spelled out how the Russians allegedly tricked Americans into following fake social media accounts filled with pro-Trump and anti-Clinton propaganda. The indictment also named two shell companies and 13 Russian nationals, including Yevgeniy Prigozhin, who has been nicknamed “Putin’s chef” for his ties to the Russian president. It’s unlikely that any of the Russians will ever face a trial in the United States, but the charges make it harder for them to travel overseas.

Russian President Vladimir Putin talks during his informal meeting with the 'Leaders of Russia' contest winners at the Kremlin on March 19, 2019 in Moscow, Russia.
Mikhail Svetlov—Getty Images

Mueller’s second big set of charges was of 12 Russian military intelligence officers. The similarly detailed 29-page indictment explains how the hackers allegedly used phishing attacks to steal files from the Democratic National Committee and the Clinton presidential campaign, then worked with WikiLeaks to distribute the information to damage Clinton’s candidacy in an effort to help Trump win. It also explains how cryptocurrency was allegedly used to pay for the effort, as well as other attempts to penetrate state elections websites. These charges are also unlikely to ever lead to a trial in the United States.

Trump campaign chairman Paul Manafort: Sentenced to seven and a half years in prison for financial crimes

Paul Manafort arrives for a hearing at US District Court on June 15, 2018 in Washington, DC.
Mandel Ngan—AFP/Getty Images

If there are direct connections between the Russian efforts and the Trump campaign, one potential contact might have been campaign chairman Paul Manafort. A longtime Republican consultant, Manafort worked overseas in recent years, including for a pro-Russia political party in Ukraine. Mueller charged Manafort with hiding tens of millions of dollars he earned for that work and lying to banks to get loans. In August, a jury in Virginia found Manafort guilty on eight counts. (It was unable to reach a verdict on 10 other counts.) Manafort then pleaded guilty on related charges in a D.C. court and began cooperating with Mueller. However, prosecutors later said he breached their agreement by lying to them, and Manafort was sentenced to a total of seven and a half years in prison.

On the other side, a possible point of contact might be Konstantin Kilimnik, who the FBI believes has ties to Russian intelligence. A former employee of Manafort’s firm, Kilimnik was sometimes described as “Manafort’s Manafort,” while Manafort reportedly called him “my Russian brain.” A poorly redacted court filing from Mueller’s team inadvertently revealed that Manafort gave Kilimnik detailed polling information during the campaign and discussed a Ukrainian peace plan, then lied about both to Mueller, even when he was supposedly cooperating. Mueller charged Kilimnik with conspiracy to obstruct justice and obstruction of justice for allegedly attempting witness tampering during the Manafort investigation.

On Nov. 15, longtime Trump confidant Roger Stone was found guilty of all seven counts he faced, including lying to Congress, tampering with a witness and obstructing a congressional investigation into Russian interference in the 2016 election.

Mueller charged Stone with lying to the House Intelligence Committee in 2017 about his contacts with WikiLeaks and tampering with a key witness who could discredit his version of events.

He has repeatedly denied any wrongdoing. Stone’s sentencing hearing is scheduled for Feb. 6, 2020. He faces up to 20 years in prison.

As a foreign policy adviser on the Trump campaign, a member of the presidential transition and the first National Security Adviser in the Trump Administration, Michael Flynn had valuable insight into key moments in the investigation. In 2017 he pleaded guilty to lying to the FBI about conversations with then Russian ambassador Sergey Kislyak and agreed to cooperate with the investigation. A year later, he asked a federal judge to delay his sentencing so that he could have more of an opportunity to assist the probes. Mueller’s team asked for him to receive little to no jail time, a sign that they viewed his cooperation as helpful.

Another valuable source of information for Mueller was Rick Gates, Manafort’s longtime business partner, a top aide on the Trump campaign and deputy chairman of the presidential inauguration committee. Facing up to six years in prison, Gates pleaded guilty in 2018 to lying to investigators and conspiring to commit other offenses. He agreed to cooperate with Mueller’s investigation. Earlier this month, prosecutors asked for the fifth time that his sentencing be delayed, citing his continued cooperation in “several ongoing investigations.”

As Donald Trump’s longtime personal lawyer, Michael Cohen had insight into Trump’s business and political efforts, including paying porn star Stormy Daniels to keep quiet about an alleged affair with Trump. Since it was not related to his main targets, Mueller handed the investigation into Cohen to the Southern District of New York. Cohen pleaded guilty to various financial crimes related to his taxi medallion business and other personal matters, as well as a campaign-finance violation for the hush-money payments. (Trump, who was named in the charges as Individual 1, is considered by some to be an unindicted co-conspirator in this case and could face charges when he’s out of office. He has denied any campaign finance violation.) Cohen also pleaded guilty to lying to Congress about his work on the Trump Tower Moscow project during the campaign and agreed to cooperate with Mueller’s investigation.

In May, he officially began serving out a three-year prison sentence at the minimum security Federal Correctional Institution in Otisville, N.Y.

George Papadopoulos arrives at US District Court for his sentencing in Washington, DC on Sept. 7, 2018.
Andrew Caballero-Reynolds—AFP/Getty Images

Although he was a minor figure in the Trump campaign, George Papadopoulos played a key role in launching the FBI investigation into ties between the Trump campaign and Russia that predated Mueller’s appointment. After he told an Australian diplomat in a bar that the Russians might have damaging information on Clinton, the diplomat passed the information to the FBI. When prosecutors first approached him in January of 2017, Papadopoulos repeatedly lied about his contacts with Russian agents. He pleaded guilty to lying to investigators and was sentenced to 14 days in prison, a year of probation and a $9,500 fine. He was released from a minimum-security facility after 12 days with credit for time spent in jail after being indicted.

Dutch attorney Alex van der Zwaan pleaded guilty to lying to the FBI about contacts with Rick Gates and an unnamed person in Ukraine. He served 30 days in jail and was deported from the United States.

A California man who ran a website selling dummy bank accounts to eBay and Facebook, Richard Pinedo pleaded guilty to identity theft as part of the investigation into Russian hackers. He was sentenced to six months in prison and six months of home detention.

Sam Patten: Pleaded guilty to failing to register as a foreign lobbyist

After investigating Republican lobbyist Sam Patten, Mueller’s team handed the case to career prosecutors in the U.S. Attorney’s office in D.C. There, he pleaded guilty to failing to register as a lobbyist for Ukrainian clients while working with Kilimnik, helping a client get around restrictions on foreign donations in order to get tickets to Trump’s inauguration, and misleading congressional investigators.

Mueller’s team referred Bijan Kian and Skim Alptekin, two former associates of Flynn, Trump’s national security advisor, to federal prosecutors in Virginia, who charged them with conspiracy to violate federal lobbying rules for their work on behalf of a Turkish campaign to expel a rival of President Recep Tayyip Erdogan. Alptekin was also charged with lying to investigators.

Gregory Craig: Acquitted on charges of lying to authorities

Gregory Craig — a longtime Washington Democratic attorney — was acquitted on Sept. 4, 2019 of a felony charge that he lied to authorities about work he did on behalf of the Ukrainian government seven years ago.

Craig worked for former President Bill Clinton and served as White House counsel during the Obama Administration. But the trial wasn’t over whether Craig worked for Ukraine; it rested on whether Craig deliberately mislead the Justice Department while it investigated whether he needed to register as a foriegn agent. After five hours of deliberation, a jury found him not guilty.

In September, federal prosecutors ended the investigation into the two lobbyists. Per Politico, Weber still resigned from his lobbying firm in August. 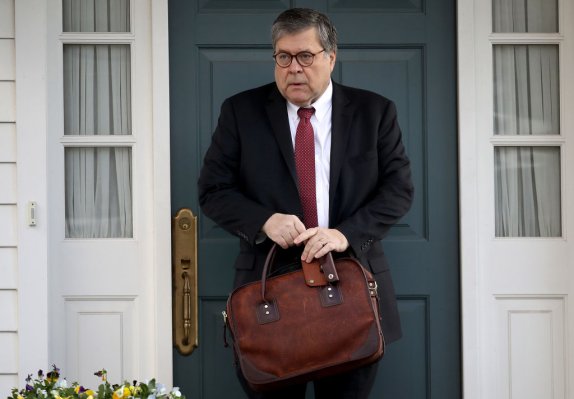 Read Barr's Letter to Congress Confirming the Mueller Report
Next Up: Editor's Pick