Watch the Rise and Fall of Richard Nixon in TIME Covers

By Corey Protin and Lily Rothman

In early August of 1974, 40 years ago this week, the news was all President Richard Nixon. On Aug. 5, the “Smoking Gun” tapes were released, revealing to the public that the President had known about Watergate. On Aug. 8, he became the first and only U.S. President to announce his resignation. But Nixon already had a long history in the news, and it didn’t end in 1974. In fact, no other individual has been featured on the cover of TIME more frequently, with 55 appearances to his name.

The irony in all that? None of those covers are from precisely 40 years ago. The week leading up to the resignation, the cover featured Rep. Peter Rodino of the House Judiciary Committee; two weeks later, when the resignation itself made the cover, newly-inaugurated President Gerald Ford was featured.

The issue in-between—the issue that would have appeared right around the same time as the tapes went public — went in a different direction: Jack Nicholson. 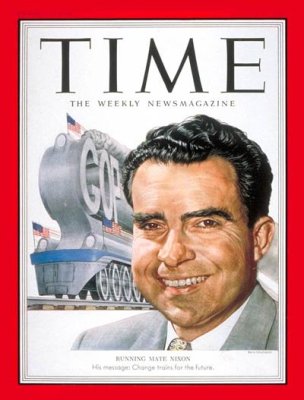 9 Things You Didn't Know About Richard Nixon
Next Up: Editor's Pick