‘Wonderful Feeling to Be Back.’ Astronaut Michael Collins Returns to Apollo 11 Launch Site on 50th Anniversary

Michael Collins revisited the exact site of the historic 1969 launch to the moon Tuesday precisely 50 years after his famous mission alongside fellow astronauts Neil Armstrong and Buzz Aldrin.

The anniversary celebration was supposed to be a reunion with Aldrin at NASA’s Kennedy Space Center in Florida, but the 88-year-old canceled his appearance, according to the Associated Press.

“There’s a difference this time. I want to turn and ask Neil [Armstrong] a question and maybe tell Buzz Aldrin something, and of course, I’m here by myself,” Collins told Kennedy Space Center Director Robert Cabana during a Q&A session. He added it’s a “wonderful feeling to be back.”

The Q&A is one of many events taking place throughout the country in celebration of the 50th anniversary of the moon landing, including an attempt to break a Guinness World Record for most model rockets launched at the same time from a single location at the U.S. Space & Rocket Center in Huntsville, Ala.

Aldrin and Collins are the two surviving astronauts who were joined by Neil Armstrong on the July 16, 1969 mission to the moon. Four days after the launch, Aldrin and Armstrong became the first people to walk on the moon, while Collins stayed aboard the Apollo 11 tending to the ship. Armstrong died in 2012.

“After the flight of Apollo 11, Neil, Buzz and I were lucky,” Collins told TIME in a Q&A published July 11. “We made a round-the-world trip. I think 25 major cities, something on that order. And I was flabbergasted. I thought that when we went someplace they’d say, ‘Well, congratulations. You Americans finally did it.’ And instead of that, unanimously the reaction was, ‘We did it. We humans finally left this planet and went past escape velocity.'”

Tuesday’s celebration also included a look at NASA’s future mission to Mars and the Moon aboard the Artemus. NASA will continue to celebrate the anniversary throughout the week at locations across the country, including a three-day Apollo 50 Festival with the Smithsonian Air & Space Museum at the National Mall in Washington, D.C. 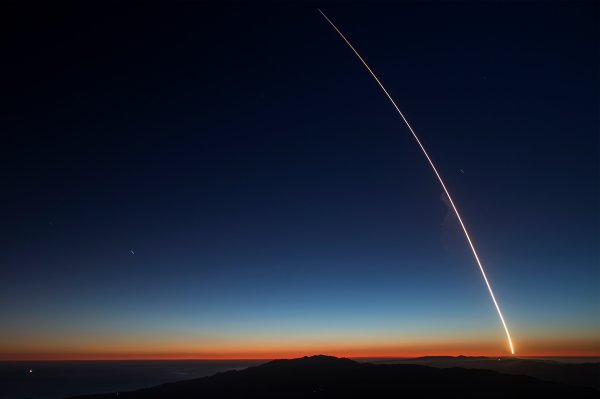 See the Past, Present and Future of American Spaceflight in 4 Minutes
Next Up: Editor's Pick