What's the Most Realistic Movie About Space? Here's What 8 Movies Got Right—and Wrong

This year marks the 50th anniversary of Apollo 11, the historic mission during which Neil Armstrong and Buzz Aldrin became the first humans to land and walk on the moon on July 20, 1969. There are few events in American history that epitomize the intrigue and allure of space exploration as much as Apollo 11, a pivotal moment at the height of the space race that showcased the unique place the cosmos hold in both our imaginations and culture.

So perhaps it should come as no surprise that in the five decades since the mission took place, space travel has been an integral source of inspiration for tales on the silver screen. While many of the movies take creative liberties with reality, veering into fantasies of the many unknowns of space, others have sought to portray the reality of what we know of space so far.

With that in mind, here’s a look at eight of the most realistic films about space and how they stack up to real life, as explained by NASA planetary scientist Rick Elphic.

Plot basics: The film adaptation of Tom Wolfe’s nonfiction novel of the same name, The Right Stuff details the origins of America’s first space program, Project Mercury, which began with testing high-speed rocket aircraft after World War II at an Air Force base in Southern California. It also features the selection of the first American astronauts, known as the Mercury Seven.

What the movie gets wrong and what it gets right: Although it’s based on Wolfe’s New Journalism masterpiece, Elphic says The Right Stuff was more rooted in a heroic narrative than historical accuracy.

“It was a fun book and a fun movie but beyond that, it really wasn’t telling a story about facts as much as it was telling a myth in some ways,” he says. “It was really kind of like the Illiad and Odyssey with mythical characters and from that point of view, it wasn’t describing things really very accurately.”

Plot basics: A dramatic re-telling of the aborted 1970 Apollo 13 lunar mission, based on the book Lost Moon: The Perilous Voyage of Apollo 13 by astronaut Jim Lovell, who was on board the spacecraft, and TIME editor-at-large, Jeffrey Kluger. In the film, Lovell and fellow astronauts Jack Swigert and Fred Haise are on Apollo 13 for the U.S.’ third moon landing mission. However, after an explosion leads to the spacecraft losing most of its oxygen and power, the mission is aborted, leaving the challenge of getting the three men aboard home safely.

What the movie gets wrong and what it gets right: Of all the space films in the canon, Elphic posits that Apollo 13 might be one of the most accurate, especially when it came to the science of space travel.

“The technical details of zero G and the actual explosion on the spacecraft that took place and took out the service module was very realistic,” he says. “I thought that it captured realism in the flight; I don’t think it went to extremes like some films do … to make it more dramatic, because I think the flight was dramatic enough in the first place. I give Apollo 13 high marks for not only drama and a good storytelling endeavor, but the effects and the accuracy.”

Plot basics: Based on the science-fiction novel by astronomer Carl Sagan, Contact centers on the tale of real-life astronomer Dr. Eleanor Arroway, who uses radio signals to find evidence of extraterrestrial life, before being selected to make first contact.

What the movie gets wrong and what it gets right: While some might scoff at the premise of a film about the existence of extraterrestrials, some of the movie’s elements could be considered realistic.

“I suppose it’s plausible that you would have a radio contact initiated with an extraterrestrial civilization and that eventually you’d build up communication to the point that you could transmit plans back and forth,” Elphic says. But he adds that the portrayal of Dr. Arroway’s travel during the film might not be as accurate. “As for her travel to wherever it is she went, it was clearly physics that we really can’t describe right now, Hollywood physics, not ours — but it made for a really good story.”

Plot basics: Two American astronauts attempt to return to Earth after their shuttle is destroyed.

What the movie gets wrong and what it gets right: While Elphic admired the physics presented in Gravity, he did take issue with one of the movie’s main plot points: Sandra Bullock’s character traveling to the nearby Chinese space station to try and return to Earth.

“The one thing that stood out to me as being highly unlikely is Sandra Bullock’s character is able to change orbits drastically from the shuttle’s orbit to that Chinese space station,” says Elphic. “It takes a lot of propulsion to change your orbit plane and your orbit altitude and that’s just not something you’re going to have in a [spacesuit] like what she was wearing. That part of it is not only far-fetched, but I would venture to say is impossible.”

Plot basics: Interstellar portrays a future in which the Earth is nearly uninhabitable thanks to a global crop blight and a second Dust Bowl. A NASA physicist attempts to save mankind by creating a wormhole that humankind can travel through to get somewhere more hospitable, but NASA researchers must first travel through the wormhole to decide which planet will be their new home.

What the movie gets wrong and what it gets right: While much of the physics in Interstellar are fairly accurate, Elphic had issues with the traveling and the wormholes.

“I had a hard time understanding what Interstellar was trying to show us because they were not only traveling in space but in time, back and forth as well,” says Elphic. “One of the things that I was wondering with that movie is that if you’re going to be somewhere in the vicinity of a black hole, you’re dealing with a lot of radiation from the black hole environment, so much so that it would kill you in a matter of minutes, but that would make for a pretty abrupt end of a movie, so I guess they couldn’t do that.

“Black holes are also notorious for ripping things like stars apart so the tidal forces that you see in the vicinity of a black hole; that’s not going to be a place where a space craft could survive,” he adds.

Plot basics: After an astronaut is left behind on Mars, he rallies to survive with limited resources while scientists and his crew work to find a way to bring him back to Earth.

What the movie gets wrong and what it gets right: When it came to representing Mars, there were both realistic and improbable elements of the film. Elphic, who praised The Martian as a “rollicking space flick,” said that the movie’s representation of the surface of Mars was accurate, although he took issue with its treatment of the elements.

“The only issue I had is that the atmosphere on Mars is pretty thin, and even if you had 100 mile-an-hour winds blowing, the force that those winds exert on anything we make, like a spacecraft or a habitat, are going to be really, really small forces,” Elphic says. “So you’re not going to be threatening to push over an ascent vehicle or anything like that with a Martian wind. The dust storm and the high winds were the main thing that introduced the whole story and you don’t have a story without that, but the reality of that is going to be a little bit different.”

Elphic also pointed out that the series of errors that happened to Matt Damon’s character would have probably resulted in an aborted mission in real life.

“One aspect that kind of had me shaking my head was that in space flight, you have to prepare for things to go wrong, and you can even prepare for a couple of things to go wrong in sequence and deal with that,” he says. “Usually beyond that, it’s the end of the mission. Since Matt Damon’s character had to deal with half-a-dozen failures all along the way, the likelihood of him making it through that was pretty much vanishingly small, but then you don’t have much of a story. There’s this disconnect between a good story and actual space flight.”

Plot basics: Based on the nonfiction novel of the same name by Margot Lee Shetterly, Hidden Figures focuses on three black female mathematicians (Katherine Johnson, Dorothy Vaughan and Mary Jackson) who worked at NASA during the space race, playing a vital role in Project Mercury and other missions.

What the movie gets wrong and what it gets right: The film’s focus on the largely unacknowledged black female mathematicians whose hard work as “human computers” made America’s space travel possible does justice to their heroic real-life counterparts who made the Mercury and Apollo missions possible. The only part of the movie that gave Elphic pause was the depiction of the math.

“I wondered a little bit about the accuracy of doing real-time calculations on a blackboard for space flight, but maybe it really did happen that way,” Elphic says. “It was a story that should have been told a lot sooner about the involvement of these folks.”

Plot basics: Adapted from the James R. Hansen biography of the same name, First Man focuses on the life and experiences of astronaut Neil Armstrong, who became the first man to walk on the moon during the historic Apollo 11 space mission.

What the movie gets wrong and what it gets right: When it comes to accuracy, First Man stayed true to the elements of the real Apollo 11 mission. One major factor that helped keep the movie realistic? It was likely aided by the actual footage from the mission, something that Elphic said is fascinating to watch side-by-side.

“One of the cool things about First Man is that you can actually go and find on YouTube, landing footage of Apollo 11, and compare it to what they show in the movie and I think it’s pretty accurate,” he says. “I don’t think they tried to be overly dramatic with that and they tried to represent what it was really like and they did that really well.” 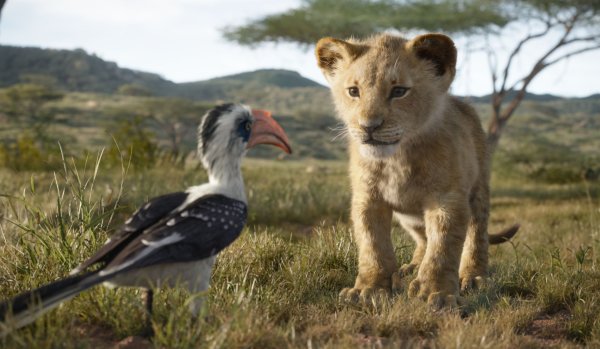 Here's How the New 'Lion King' Is Different From the Original
Next Up: Editor's Pick