'Whenever There’s Trouble He Rushes There.' Meet Legislator Roy Kwong, the God of Hong Kong Protests

In a narrow office, just across the bay from mainland China, sits the God of Hong Kong Protests.

Roy Kwong, a social worker turned politician, is fielding back-to-back interviews while writing a column about the police response to discontent flaring in the city this summer. He’s due for a live radio call in 15 minutes.

The 36-year-old legislator appeared on the front lines soon after the mass marches kicked off in June, when he heard police were conducting random searches at train stations. He rushed to the scene to offer assistance to young protesters and has been a fixture at the demonstrations ever since, always ready to fire off three rules of engagement at the crowd through his megaphone: don’t get injured, don’t spill blood, and don’t get arrested.

Kwong has vowed to safeguard the teenagers thronging to the streets in a rebellion against Beijing’s choke hold on the semi-autonomous enclave. No one, he says, should “have to pay the price of their youth.” Whenever police phalanxes ready fresh volleys of tear gas, Kwong puts himself in front of the protesters, trying to buy time for a retreat. When the leaderless movement loses steam, he channels his hero, Abraham Lincoln, and delivers extemporaneous speeches. Before a protester fell to his death from a mall last month, Kwong was there, begging him to come down.

Kwong’s dedication—he even passed out from exhaustion in front of a protest bloc—has earned him something the Hong Kong government is direly short on: trust. It’s also made him Hong Kong’s most popular lawmaker. Rarely do politicians inspire spontaneous applause by mere presence, but that’s how young people in Hong Kong respond to him. They’ve nicknamed him “God Kwong.”

“Whenever there’s trouble he rushes there regardless of whether he’s sick or tired,” says Kung, a 25-year-old protester. “We call him a god because he seems like he’s mighty.”

Before he emerged as the tutelary deity of student protesters, Kwong built a reputation as a prolific romance novelist, producing work with such titles as The Appearance of Regret and There Is a Kind of Happiness Called Forgetting. (He remains an author to this day, with his latest tale We Are Together appearing just this week.)

He has brought equal passion to Hong Kong’s legislature, to which he was elected as a Democratic Party lawmaker in 2016. His spirited antics—like standing on his desk to oppose the establishment of mainland Chinese jurisdiction at a train terminus—contrast sharply against a bureaucracy widely perceived as out of touch.

In a chamber of mostly pro-establishment lawmakers, many of whom are not directly elected, Kwong may be the closest Hong Kong gets to Mr Smith Goes to Washington.

Wu Chi-wai, chair of the Democratic Party, praises him for connecting young protesters and throwing the “coolness” of a sclerotic government into sharp relief. Adds James To, a legislator and party colleague: “He’s not very like a politician.”

On the front lines

In a ground floor office at the public housing estate where he grew up, Kwong can barely squeeze desks for himself and his staff. Iron Man, Toy Story and Back to the Future posters cover the walls, and a homily about Martin Luther King Jr is taped to the bathroom door. Except for all the binders stuffed with public works proposals, it could be the office of a college newspaper.

It was here in Yuen Long, one of Hong Kong’s poorest districts, that Kwong spent his childhood. The son of a driver and a stay-at-home mom, he took his first job at a youth center and was elected at 24 to the district council—an area-level body that advises the government on local affairs. Three years ago, Kwong won a seat in the Legislative Council, the city’s parliament. But he still makes the 90-minute trek to this home base two or three times a week.

Like the rest of Hong Kong, Yuen Long suffers from a dearth of affordable housing and soaring inequality. The maze of concrete behemoths feels a world away from the gleaming government offices and corporate towers of the downtown Admiralty district, where the protests have mostly been centered.

“It took eight years to get this installed,” Kwong says, gesturing at an elevator that takes passengers up to one of the footbridges that are a feature of virtually every neighborhood in densely crowded Hong Kong. The delay over making the public walkway handicap accessible was not because of a lack of funds—the government boasts a $88 billion budget surplus and more than $128 billion in fiscal reserves—but due, Kwong says, to a lack of interest. “It seems the government can never really feel the hardship of its the people.”

Securing basic amenities may not be glamorous or headline-worthy work, but Kwong built his reputation on championing such causes—and not just for young people, either. As chair of the Legislative Council’s welfare panel, he spent much of the last year defending a stipend for the elderly until protests forced the lawmaking body into an early recess. Before he raced off to a recent protest, clad in the demonstration uniform of black t-shirt and sneakers, he got a call from a newly widowed resident about rehousing five dogs she could no longer take care of alone.

“Whether on the front lines or in their lives,” he says, “I hope to play a role [helping people].”

Kwong sees the administration’s apathy toward bread and butter issues as ultimately stemming from the same problem that has forced protesters to make the streets their ballot box: the government is not fully elected by, or accountable to, the people.

“The Hong Kong political system from the start is a big problem.”

In the 70-seat legislature, only half of the members are directly elected. The other half are selected by special interest groups—such as the financial and real estate professions—meaning that the body tends to be controlled by a mostly pro-Beijing business elite rather than by voters. The city’s Beijing-backed leader, Chief Executive Carrie Lam, likewise lacks a popular mandate. Popularly elected candidates have meanwhile been barred from the legislature for advocating self-determination for Hong Kong or holding separatist views, while several others were prevented from even running. To an entire generation, the political system appears illegitimate.

The unrest seizing Hong Kong this summer may have coalesced around an extradition bill that exposed fears of the Chinese Communist Party’s growing influence on the territory. But it has since snowballed into a fight for greater democracy. Many of the young activists are driven by a sense that city’s oligarchic political system is rigged against them. Without democracy, they say, there is no recourse from immense income inequality, ruinously high property prices, or stagnating social mobility.

One-fifth of the city falls under the poverty line and nearly 30% lives in public housing developments like the estate that Kwong grew up in. While waiting an average of five and a half years for a subsidized apartment, some are forced to live in “cage homes” or “coffin homes”—narrow bunk spaces crammed into endlessly subdivided apartments. These are so oppressive that many dwellers in such accommodation prefer to leave them and become “McRefugees”—spending the night at 24-hour McDonalds outlets. Owning a home in the world’s most expensive city remains an impossible goal for most.

It’s not just the property rates squeezing people. The rise in commercial rents has also kicked up the cost of goods and services. And in the 22 years since the former British colony returned to Chinese sovereignty, Hong Kong’s Gini coefficient, a statistical measure of economic inequality, has steadily ticked upward. As of 2017, it peaked at 0.539—the highest level in more than four decades. Meanwhile, an influx of cash and people from the mainland has intensified both job and housing competition, and exacerbated deep-seated anxieties over the enclave’s integration with the rest of China.

“While integration with Mainland China and China’s economic prosperity have been hugely beneficial for lawyers, bankers, business people and property magnates, economic benefits have largely eluded young people,” says Phil Chan, a senior fellow at the think tank Institute for Security and Development Policy. He says discontent over this inequitable system has now “reached breaking point.”

“The young people are particularly concerned because after all we are talking about their future,” says Anson Chan (no relation), Hong Kong’s second-highest government official before her retirement in 2001, and the founder of a think tank on democracy and governance issues. At present, “the legislature is absolutely dysfunctional,” Chan adds “They are riding roughshod over the public’s expectations.”

The government has attempted to decouple economic frustrations from the swelling political anxieties, suggesting that the protesters are simply disaffected youth upset over their job prospects. But Chan calls this a drastic oversimplification. “They think economic growth and sustainability can be put in a compartment completely separate from liberal political values. But if you want true economic vitality, you have to allow political vitality,” she says.

From the young protesters’ vantage point, “It’s all about democratization,” says Fiona, 27. “If we aren’t able to choose the city’s leader…she doesn’t have to be responsible to the people.”

The depth of political disillusionment became clear on July 1, when a group of young protesters broke into and vandalized the legislative complex. When Kwong and other lawmakers arrived on the scene advocating moderation, the enraged mob called them useless. Video footage shared widely on social media showed Kwong trying to block protesters wielding makeshift battering rams with his own body. He was eventually pushed aside, and the group managed to smash through the building’s reinforced glass façade.

Still, Kwong refuses to condemn their tactics. “They were prepared to go to jail. Think about it: in which other city in the world would the young people be coming out and saying, ‘I’ll give up my youth’ [like they are] for Hong Kong?”

He adds that the truly remarkable thing is not the lengths the youth were willing to go to, but the fact that so many older people in the city continue to empathize with them, seeing them not as firebrand radicals, but as young people pushed to the point of no return.

“The most important thing right now is to fight this battle well. It’s not over,” concludes God Kwong, pledging to continue watching over his flock. “I think everyone has their mission in life. Me? I have to do this thing.” 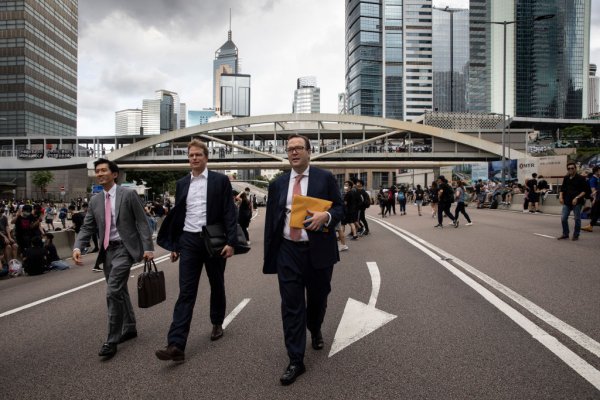 Why Business Has a Stake in Hong Kong's Protests
Next Up: Editor's Pick