A 35-year-old man who died after unfurling a banner denouncing Hong Kong’s extradition bill on the side of a shopping mall is being hailed by protesters as a “martyr.”

Local media reports reports that the man plunged to his death after climbing up construction scaffolding on Saturday afternoon local time at the Pacific Place mall in the Admiralty district—scene of massive protests this week against legislation that would have allowed, for the first time, the extradition of fugitives to mainland China.

Police are treating the case as suicide, local media said, giving the man’s surname as Leung.

According to Apple Daily, the man strung up a banner denouncing the legislation and calling for the ouster of Hong Kong’s top official Carrie Lam. He wore a yellow raincoat bearing the words “Carrie Lam kills Hong Kong.”

He reportedly continued his protest for some hours and then abruptly climbed over the scaffolding, falling to his death on the street below after firefighters failed to restrain him.

Twitter users reported that crowds of mourners had gathered overnight at the scene, laying down flowers and saying prayers. Protesters gathering today for a large march demanding the withdrawal of the bill are being asked to wear black and bring white flowers to commemorate the deceased man.

Hong Kong legislator Ray Chan tweeted “You have blood in your hands, Carrie Lam and her administration. The people will make you pay.

The Hong Kong government’s bid to fast-track legislation that would allow for suspects to be extradited to mainland China has plunged the semi-autonomous enclave into political crisis. Lam was forced to suspend the bill’s passage on Saturday but opponents are not satisfied and are marching Sunday to call for the bill’s total withdrawal.

The government argues that the bill is necessary to ensure that the former British colony does not become a haven for fugitives, but critics fear that Beijing will use its provisions to come after dissidents and other political opponents, severely curtailing Hong Kong’s freedom of expression.

Opposition to the bill has united broad swathes of Hong Kong society, from teenage students to lawyers and chambers of commerce. A protest march on June 9 brought hundreds of thousands onto the streets.

Huge crowds outside the legislature on June 12 forced the adjournment of a debate on the legislation. Violent clashes with police broke out afterward that left at least 72 people injured, 2 seriously. 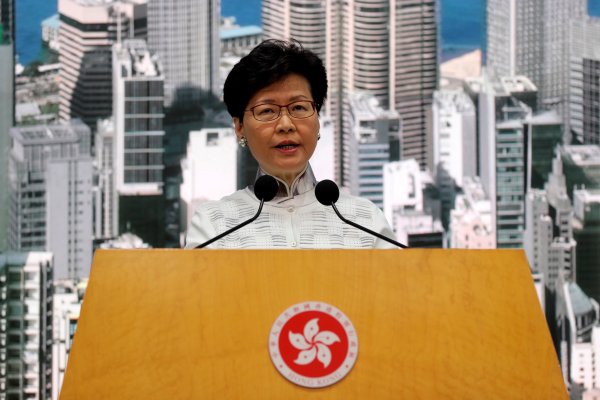