Area 51 Is the Internet's Latest Fascination. Here's Everything to Know About the Mysterious Site

Area 51 has been shrouded in mystery for decades, so it only makes sense that the rumored alien secrets held within the remote desert site would get a reboot in the social media age.

The internet has been invaded by Area 51 memes inspired by a joke Facebook event to take over the secretive military site and find the supposed aliens kept inside. The event, called “Storm Area 51, They Can’t Stop All of Us,” is planned for Sept. 20, and so far 1.5 million people have signed on.

As far back as the 1950s, people have reported seeing Unidentified Flying Objects (U.F.O.’s) at the southern Nevada military base.

On June 17, 1959, the Reno Evening Gazette published a story with the headline “More Flying Objects Seen In Clark Sky,” and described how Sgt. Wayne Anderson of the local sheriff’s office was among several locals to spot what the paper described as an object “bright green in color and descending toward the earth at a speed too great to be an airplane.”

According to the CIA, secretive flight testing has been happening in the area since the military began testing U-2 CIA spy planes in 1955, around the time reports of U.F.O. sightings started to come out — but that news has done little to quell the otherworldly theories that have long surrounded the enigmatic site.

Here’s everything to know about the history of Area 51, and why more than a million people want to “see them aliens.”

Area 51, officially named the Nevada Test and Training Range at Groom Lake, is a high-security open training range for the U.S. Air Force in southern Nevada — though the site is still very secretive.

The public found out that Area 51 officially existed in August 2013 after Dr. Jeffrey T. Richelson, a senior fellow at the George Washington University National Security Archive, submitted a Freedom of Information Act Request in 2005 for information on the CIA’s Lockheed U-2 plane reconnaissance program, the secret construction and testing of spy planes used to gather intelligence.

The request forced the CIA to declassify documents on the history of the U-2 and A-12 OXCART program and the military base where the planes were constructed and tested — Area 51.

“There certainly was — as you would expect — no discussion of little green men here,” Richelson, who died in 2017, told The New York Times in 2013. “This is a history of the U-2. The only overlap is the discussion of the U-2 flights and U.F.O. sightings, the fact that you had these high-flying aircraft in the air being the cause of some of the sightings.”

Malcolm Byrne, Deputy Director and Director of Research at the National Security Archive, tells TIME that Richelson essentially solved the mystery surrounding Area 51 indirectly. “I don’t think Richelson was going after Area 51 specifically, it’s just that as often happens in these things, there’s serendipity and so material gets released that has things of interest for other people.”

What is the proposed “raid”?

In a pinned post on Facebook event’s page, Jackson Barns, who says he created the joke event, details his tongue-in-cheek plan to invade Area 51. It involves Monster energy drinks, “Kyles” (the internet name for white men and boys who have anger issues and punch drywall) and Naruto-running, inspired by a Japanese anime show.

“Then the Rock Throwers will throw pebbles at the inevitable resistance (we don’t want to hurt them, we just want to annoy them enough to not shoot the kyles as often),” Barns writes, before making it clear that he does not advocate this plan actually coming to fruition. “P.S. Hello US government, this is a joke, and I do not actually intend to go ahead with this plan. I just thought it would be funny and get me some thumbsy uppies on the internet.”

So far, 1.5 million people from all over the world have signed on to join the “raid,” and the event has inspired a mega-viral meme. Even rapper Lil Nas X released a new music video for his hit “Old Town Road” that features cowboys raiding Area 51.

How has the government responded to the raid?

A spokesperson for the U.S. Air Force told several media outlets that they are aware of the plans to “raid” Area 51 — and are staunchly against them.

“Any attempt to illegally access the area is highly discouraged,” an Air Force spokesperson told NPR in a Monday statement, along with several other media outlets.

“[Area 51] is an open training range for the U.S. Air Force, and we would discourage anyone from trying to come into the area where we train American armed forces,” Air Force spokeswoman Laura McAndrews told The Washington Post. “The U.S. Air Force always stands ready to protect America and its assets.”

The Air Force did not immediately respond to TIME’s request for comment.

Why has Area 51 become the subject of so many conspiracy theories?

When Sgt. Anderson told the Reno Evening Gazette (now known as the Reno Gazette-Journal) about spotting a U.F.O. back in 1959, the outlet also reported that the Nellis Air Force Base, located about 130 miles south of Area 51, had received two previous reports in the past three weeks of U.F.O. sightings.

Those reports came just a few years after rumors of a U.F.O. crashing in Roswell, New Mexico in 1947, which the Roswell Army Air Field later said was a weather balloon. The Air Force began investigating claims of U.F.O. sightings in 1947, which later became known as Project Blue Book in 1952. By the time Project Blue Book ended in 1969, the Air Force had investigated over 12,000 claims.

Meanwhile, people in the southern Nevada region continued to report U.F.O. sightings, which in hindsight were probably sightings of the top-secret spy planes being constructed. Even so, imaginations have run wild ever since.

It has also inspired episodes of The Twilight Zone and The X-Files, as well as the slightly less iconic straight-to-video film Scooby-Doo and the Alien Invaders. 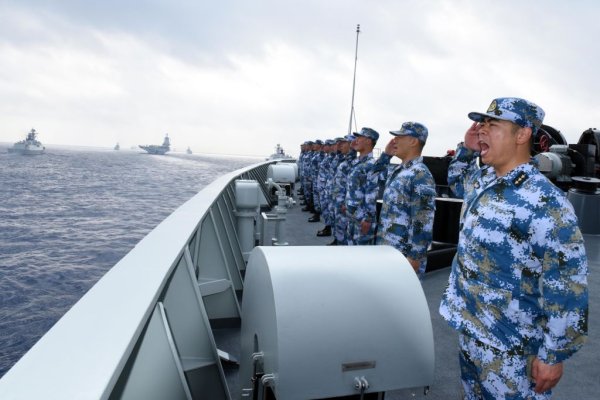