Lots of People Have Theories About Neil Armstrong's 'One Small Step for Man' Quote. Here's What We Really Know

At 10:56 p.m. ET on July 20, 1969, the American astronaut Neil Armstrong put his left foot on the lunar surface and famously declared, “That’s one small step for man, one giant leap for mankind.”

In the 50 years since then, many have been eager to hear more about what prompted him to choose those words to be the first spoken on the moon.

Was Neil Armstrong inspired by The Hobbit?

According to Armstrong biographer James R. Hansen — author of First Man: The Life of Neil A. Armstrong, which inspired the 2018 film First Man — some think Neil Armstrong’s famous quote is a riff on a line from J.R.R. Tolkien’s The Hobbit, in which the author describes protagonist Bilbo Baggins becoming invisible and jumping over the villain Gollum, “not a great leap for a man, but a leap in the dark.” And there is, in fact, an Armstrong-Tolkien connection. After leaving NASA, Armstrong and his family moved to a farm in Lebanon, Ohio, that he dubbed Rivendell, which is also the name of a valley and the home of the half-elf, half-human Elrond, in Lord of the Rings. Armstrong also had Tolkien-themed email address in the ’90s.

However, when Hansen asked Armstrong to set the record straight on that theory, the Apollo 11 astronaut said he didn’t read Tolkien’s books until after the Apollo 11 mission.

Was the famous quote taken from a NASA memo?

Others have said Armstrong may have been influenced by a April 19, 1969, memo he had seen from Willis Shapley, an associate deputy administrator at NASA headquarters. “The intended overall impression of the symbolic activities and of the manner in which they are presented to the world should be to signalize [sic] the first lunar landing as an historic step forward for all mankind that has been accomplished by the United States of America,” he wrote. “[The] ‘forward step for all mankind’ aspect of the landing should be symbolized primarily by a suitable inscription to be left on the Moon and by statements made on Earth, and also perhaps by leaving on the Moon miniature flags of all nations.”

Armstrong, however, claimed he had no recollection of the memo.

The astronaut told Hansen the line had no complicated origin story, and simply came to him in the lead-up to the historic moment: “What can you say when you step off of something? Well, something about a step. It just sort of evolved during the period that I was doing the procedures of the practice takeoff and the EVA [extravehicular activity] prep and all the other activities that were on our flight schedule at that time.”

A screenshot from video footage of Commander Neil Armstrong climbing down the ladder of the Lunar Module (LM) the 'Eagle,' to become the first man to set foot on the Moon on July 20, 1969, during NASA's Apollo 11 lunar landing mission.
Space Frontiers—Getty Images

Grammarians have also pondered the matter of “the missing ‘a'”: In the audio from the moon, Armstrong sounds as if he’s saying “one small step for man,” and that’s the wording that appeared in contemporary reports on the moment. But wouldn’t it make more sense for him to have said “one small step for a man”? That extra article would improve the sentence’s grammar, highlighting the contrast between the single individual and the entirety of humankind, and Armstrong has said that he meant to say it that way in the first place.

After analyzing the audio file more closely, some experts have come to believe he did in fact say that syllable and has been misquoted in the 50 years since.

In 2006, a computer programmer Peter Shann Ford said he detected the missing “a” after putting the audio into a software that disabled people use to communicate using nerve impulses — research that Armstrong in a statement called “persuasive” backing for the idea that he did not misspeak. A 2013 study provided further support for the idea that Armstrong meant to say “a man” even if listeners on earth didn’t hear it that way. A year after Armstrong died on Aug. 25, 2012, at the age of 82, researchers from Ohio State University and Michigan State University analyzed the speaking patterns of central Ohioans like Armstrong, who hailed from Wapakoneta, and found that they tend to leave out words like “for” and “a.”

Even Armstrong’s younger brother Dean claimed Neil said “one small step for a man,” stating in a 2012 BBC documentary that, months before the historic flight, while playing the board game Risk, Neil passed him a piece of paper with the now famous line written down. “He says, ‘What do you think about that?’ I said, ‘Fabulous,'” Dean recalled. “He said, ‘I thought you might like that, but I wanted you to read it.'” (Hansen, however, has said Dean never told him that story in more than four decades of knowing him.)

In Hansen’s biography, Armstrong asked people to cut him some slack about the grammar.

“I can’t recapture it. For people who have listened to me for hours on the radio communications tapes, they know I left a lot of syllables out. It was not unusual for me to do that. I’m not particularly articulate. Perhaps it was a suppressed sound that didn’t get picked up by the voice mic. As I have listened to it, it doesn’t sound like there was time there for the word to be there…[C]ertainly the ‘a’ was intended, because that’s the only way the statement makes any sense. So I would hope that history would grant me leeway for dropping the syllable and understand that it was certainly intended, even if it wasn’t said — although it actually might have been.” 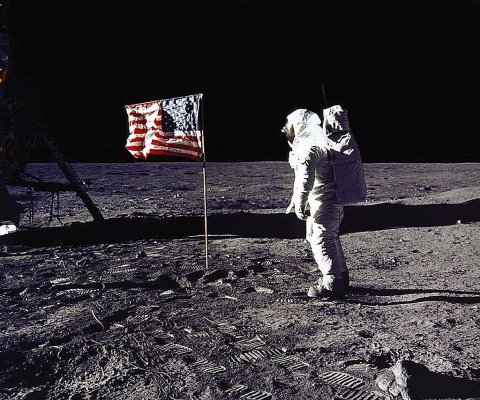 8 Places You Can Visit to Celebrate Apollo 11's 50th Anniversary This Week
Next Up: Editor's Pick