Apollo 11 Had 3 Men Aboard, But Only 2 Walked on the Moon. Here’s What it Was Like to Be the Third

Michael Collins was the man who got history’s middle seat — literally aboard the Apollo 11 spacecraft, but in more lasting ways too. He was, technically, the second-ranking member of the three-man crew that achieved the historic moon landing of July 20, 1969.

As command module pilot, Collins was answerable to commander Neil Armstrong, but outranked lunar module pilot Buzz Aldrin. In the protocol-minded world of NASA, the crew was thus known as Armstrong, Collins and Aldrin, always in that order. But the world has ever flipped that sequence to Armstrong, Aldrin and Collins. That, of course, was because Armstrong and Aldrin alone descended to the lunar surface while Collins — like the command module pilots on the subsequent five lunar landings — remained aloft in lunar orbit, tending the mother ship and prepared to dive to a lower orbit and rescue the other two if their lunar module failed to climb to sufficient altitude when it was time to come home.

Before the crew left Earth, Deke Slayton, who made the crew assignments, promised Collins that as soon as Apollo 11 made it home, he would slot him back into the flight rotation so he could command his own mission and get his boots dirty too. Collins declined. As long as Apollo 11 succeeded, he said, he would have done his bit for history. Half a century later, the world still wonders about the contemplative man who played a crucial and too-often overlooked role in one of the species’ greatest achievements.

TIME: In some ways, it always seemed that you had the richest position on the mission. It was the quietest. It was the most reflective. You didn’t leave any boot prints on the moon. But it seemed like you were just particularly suited for the job you had and in fact grew to love it. Is that true?

COLLINS: I’d be a liar or a fool if I said I had the best seat on Apollo 11. But I can say absolutely, with total honesty, I was delighted to have the seat that I had. I keep thinking about John F. Kennedy and his mandate to be on the moon by 1970. It was on our minds, all of us. And I was the ticket home for Neil and Buzz.

And yet the risk did exist that America would send three men to the moon and only you would return. Was there much psychological training in preparation for what it would be like to come home having lost your friends?

I don’t know that we had a single little dollop of psychological training. I do recall that when I applied to be an astronaut we had to undergo some psychiatric tests. And the first time, I flunked. They assailed me with a whole series of inkblot tests. And I identified very carefully and properly this one, that one. We got down to the last one. It was a blank piece of paper. And I said, “Oh sure, that’s eleven polar bears fornicating in a snow bank.” And, lo and behold, I was rejected. But the next time when I got to that point I said, “I see my mother, my father. My father’s a little bit larger than my mother. And they both are very stern and wonderful people.” And I passed that time. So where were we? You were talking about something entirely different, but no, I’m too simpleminded to have psychiatric problems.

You once said that a lunar landing mission was so vast, so complex, that the only way you could train for it was to make sure that if it failed, it wouldn’t be because of you. I think you said, “Just don’t let me mess my part up.”

In my mind a voyage to the moon and back is a long and a very fragile daisy chain. I think one time I counted there were something like 25 finite lengths in that chain. Any one of those gets broken and all of ’em downstream of course are useless. When we did something like exceeded escape velocity and left Earth orbit, for example, that was a big achievement from a technical point of view. But did we rejoice and high five one another? No. Because you can’t pay attention to what’s behind you. You gotta pay attention to what’s ahead of you.

So no celebrating even when Neil and Buzz did make it back from the surface?

Oh absolutely. I was absolutely delighted to see ’em. I was about to kiss Buzz Aldrin on the forehead. And I decided maybe no, no, I think the history books wouldn’t like that. So, sure. It was a wonderful instant in time. But, okay, we had to get the command module cranked up. Get rid of the [Lunar module] Eagle. Burn the engine. Get out of lunar orbit. We still had 12 of the 25 ahead of us in terms of links in a chain.

From left to right, Neil Armstrong, Michael Collins and Buzz Aldrin, the crew of the historic Apollo 11 moon landing mission, are subjected to a period of quarantine upon their return to earth. Through the window of their Mobile Quarantine Facility, they hold a conversation with President Richard Nixon.
MPI/Getty Images

And yet I have a quote I want to read from your book Carrying the Fire, describing the Earth rising up over the moon. You said, “It pokes its little blue bonnet up over the craggy rim. And then, not having been shot at, surges up over the horizon with a rush of unexpected color and motion.” That’s music. That’s extraordinary.

You know, honest, I swear I don’t remember saying that or writing that. I’ve written four books and trying for five right now. Maybe I used to be better than I am now.

I guess my larger question is about how you speak a lot now about the importance of language. STEEM as opposed to STEM with one of the E’s being English.

Well, STEM—science, technology, engineering and math—is the mantra in many quarters. And I think STEM is wonderful and important. But I do not consider it to be a complete education. Perhaps I’ve known too many incoherent engineers. I’m a watercolor painter. If I mess up a watercolor that’s just purely a private matter. Doesn’t matter. Not important. But if I’m an engineer and I mess up a presentation of important facts because I obscure them in a flood of jargon, and I can’t really get my point across using the English language, then I think that’s important. I go to MIT from time to time. And I really like talking to those young guys and women. They’re so smart. They’re so hardworking. But I like to beat them up a little bit and try to infuse some awareness of the English language. I tell them if they don’t already know they should be working on that as well.

It’s been nearly half a century since since any human being flew beyond low-Earth orbit. A space race with the Soviets helped us get to the moon the first time. Do you think a new space race would energize things again?

I’m very much in favor of international cooperation. After the flight of Apollo 11, Neil, Buzz and I were lucky. We made a round-the-world trip. I think 25 major cities, something on that order. And I was flabbergasted. I thought that when we went someplace they’d say, “Well, congratulations. You Americans finally did it.” And instead of that, unanimously the reaction was, “We did it. We humans finally left this planet and went past escape velocity.” That’s not the terminology they used, but I thought that was wonderful. North, white, rich, poor, black, white, east, west — what other achievement can bring all of those disparate interests together? Nothing I can think of, except the first lunar landing did. Albeit very briefly. But it did. 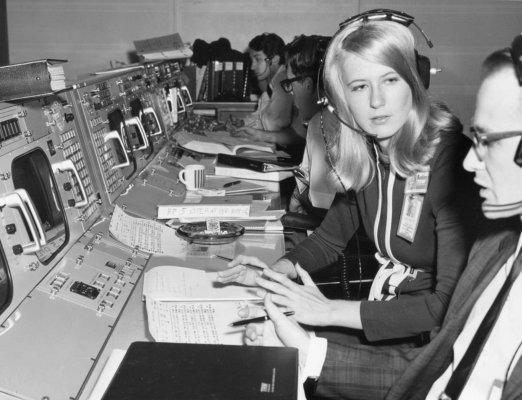