Soccer Star Megan Rapinoe Is Fearless in the Face of France—and Trump. It's Her World Cup Now

Megan Rapinoe’s shot, a free kick on the left wing — right outside the goal box — somehow lasered past the entire American and French teams, it seemed. A bunch of players tried to alter the ball’s direction. They all failed. American Julie Ertz hurled her leg toward it, to deflect it into the goal. She swung and missed; Rapinoe put too much heat on it. French star Amandine Henry nudged at it. Too late. When the ball reached the back of the net, giving the Americans a 1-0 lead over host France barely five minutes into this Women’s 2019 World Cup quarterfinal match, you may have wondered who’d get credit for the score. Someone touched, it right? Was it an own goal?

Nope. It was another Rapinoe rocket; all Megan, again.

Has any World Cup belonged to a single player, like this current one belongs to Rapinoe? Sure, Carli Lloyd scored a hat trick in the final back in 2015. But she wasn’t a leading voice in her team’s battle for equal pay, nor drawing the ire of her country’s President, while leading the Americans to a title.

Rapinoe has scored all four of America’s goals in the knockout round. She converted two penalty kicks in the American team’s 2-1 Round-of-16 victory over Spain. And after her early score against France, she took a cross from Tobin Heath in the 65th minute that appeared targeted for Samantha Mewis, but would up on her right foot. Lucky break: Rapinoe fired another one into the net, giving the U.S. a 2-0 lead. The Americans would need this insurance: Wendi Renard scored for France on a header in the 81st minute, but the U.S. held off France’s attack in the game’s final minutes to advance to the semifinals, on July 2 against England.

A viral video, shot earlier this year by soccer magazine Eight by Eight, made the rounds this week; the clip shows Rapinoe saying “I’m not going to the f–king White House,” in response to a question about whether she’d be excited about visiting President Donald Trump if he extended an invitation to the team after the tournament. The Tweet caught Trump’s attention, and he fired back with a series of Tweets that originally misspelled Rapinoe’s last name (he forgot the e). Trump wrote that Rapinoe should “WIN first before she TALKS!,” and then invited team to the White House win or lose. Rapinoe has continued to back Colin Kaepernick’s protests against social injustices during the national anthem: she stands motionless during the anthem. “Being a gay American, I know what it means to look at the flag and not have it protect all of your liberties,” Rapinoe said in 2016.

“Megan should never disrespect our Country, the White House, or our Flag, especially since so much has been done for her & the team,” Trump wrote. “Be proud of the Flag that you wear. The USA is doing GREAT!”

With the political storm swarming around her, Rapinoe — one of the more self-assured athletes sports stars out there — remained resolute at a press conference on Thursday. She just expressed regret at her curse word. “I stand by the comments I made about not wanting to go to the White House with the exception of the expletive,” she said. “My mom would be very upset about that.” Rapinoe laughed. “Hopefully [we are] using [that platform] for good and leaving the game in a better place and hopefully the world in a better place,” she said. “I don’t think I would want to go. And I would encourage my teammates to think hard about lending that platform or having it co-opted by an administration that does not feel the same way and fight for the same things that we fight for.”

Her boldness was on ever fuller display on Friday night in Paris, when she scored two crucial goals in a high-stakes quarterfinal against the home team. Rapinoe turned in an all-time performance on the international stage. France had set its sights on winning its first Women’s World Cup, after its mens’s team took home the trophy at the men’s event in Russia last summer. Rapinoe ended that dream, almost singlehandedly. After each goal, she spread her arms out, royalty shrouded in defiance. She showed that athletes can simultaneously use their platforms to exercise free expression, and excel on the field. You can refuse to “stick to sports,” and still be pretty darn good at them. 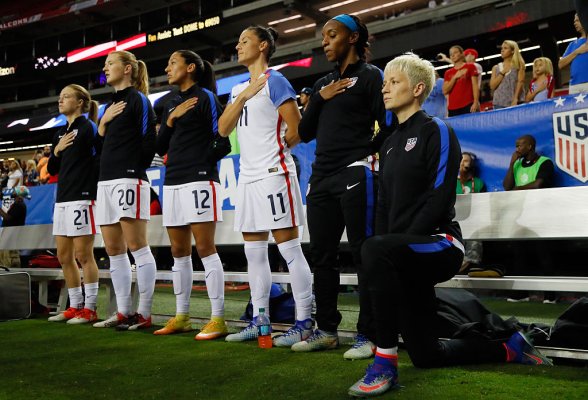