Trump Says It's Inappropriate for U.S. Soccer Star Megan Rapinoe to Protest During the National Anthem

At the FIFA Women’s World Cup in France, where the U.S. team advanced to the quarterfinals with a win against Spain on Monday, Rapinoe has stood motionless when “The Star Spangled Banner” is sung at pre-game ceremonies. Rapinoe has long been outspoken about her decision to keep quiet or kneel during the national anthem to protest police brutality and discrimination against minorities.

Asked by The Hill if Rapinoe’s protests were appropriate, Trump said, “No. I don’t think so.”

Rapinoe, 33, first knelt during the national anthem in September 2016, as a gesture of solidarity with African American football players in the NFL, including former San Francisco 49ers quarterback Colin Kaepernick, whose kneeling protests sparked national debate. In February, Kaepernick settled a lawsuit he had opened against the NFL arguing that team owners and officials had colluded to keep him out of the league after his protests.

“Being a gay American, I know what it means to look at the flag and not have it protect all of your liberties,” Rapinoe told American Soccer Now to explain her decision to start protesting in 2016.

After Rapinoe’s protest, the U.S. Soccer Federation introduced a rule requiring players to “stand respectfully” during the anthem. Rapinoe then began standing still and expressionless when it was sung at games.

In May, she told Yahoo Sports she would “probably never put [her] hand over [her] heart” or “sing the national anthem” again.

In the same interview, she called Trump “sexist,” “racist” and “not a good person.”

Trump has previously said that NFL teams should fire players who protest during the anthem. He has also suggested that those who refuse to stand “maybe […] shouldn’t be in this country.”

The president also recently declined to endorse calls by Rapinoe and her colleagues for male and female soccer players to be paid equally.

In March, all 28 members of the U.S. women’s soccer team filed a lawsuit against the soccer federation, arguing that U.S. Soccer “has utterly failed to promote gender equality.” Women could be paid as little as 38 cents on the dollar, by their calculations, compared to their male counterparts. The women’s team tops soccer association FIFA’s world ranking, while the men’s team is ranked No.30. On June 22, the team and the federation said they were entering mediation.

When an NBC correspondent asked the president about the gender pay gap in soccer earlier in June he reportedly said only, “We’ll talk about that later.”

Correction, June 25: The original version of this story misstated the city where the U.S. women’s soccer team played Spain on June 24. It was in Reims, France, not Tokyo, Japan. 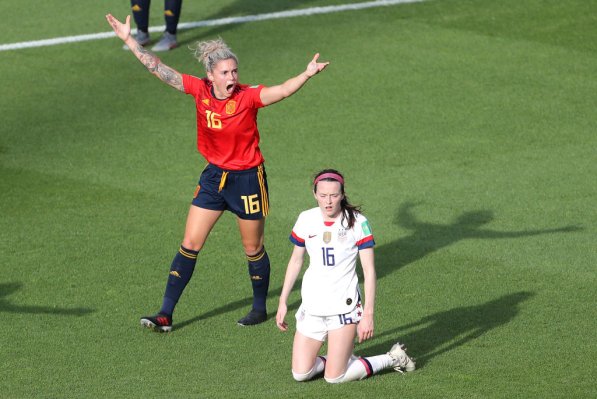 What Is VAR? Soccer's Video Review Is Making a Mess of the Women's World Cup
Next Up: Editor's Pick