Four years after the U.S. women’s soccer team triumphed at the 2015 FIFA Women’s World Cup, the team successfully defended its title in Sunday’s final match against the Netherlands, winning 2 to 0. The sold-out game saw 57,900 spectators in France’s Stade de Lyon.

A difficult match-up, neither team scored in the first half. The 0-0 score at halftime was largely due to the Netherlands’ goalkeeper, Sari van Veenedaal, as the Dutch team vied for its first World Cup title.

But the U.S. gained momentum in the second half when co-captain Megan Rapinoe made the first goal of the game at the 62-minute mark. Midfielder Rose Lavelle then brought the U.S. to its 2-0 victory.

Rapinoe’s goal won her the Golden Boot (top goal-scorer) and Golden Ball (most valuable player) honors. She and fellow co-captain Alex Morgan each made six goals in the 2019 World Cup, making Morgan the second-place Golden Boot recipient. Lavelle’s goal in the final earned her the third-place Golden Ball award. Van Veenedaal’s hard work on Sunday wasn’t all for nought, though. The Dutch goalie won the Golden Glove award as the best goalkeeper in the tournament.

Their latest championship comes after a dramatic World Cup performance for the women who were heavily favored to go all the way in the tournament. Their dominance was evident in their first round matchup against Thailand on June 11, delivering a punishing 13-0 victory. In another history-making moment, it was the most goals ever scored in a Women’s World Cup match.

As the tournament progressed, the event also took a political turn when Rapinoe made headlines for choosing to stand motionless during the national anthem in solidarity with former NFL quarterback Colin Kaepernick. The move prompted a reaction from President Donald Trump, who called Rapinoe’s decision inappropriate, and later called her out on Twitter.

Shortly after the controversy, and perhaps fueled by the headlines, Rapinoe delivered a dominating performance in the quarterfinal match against France on June 28 — delivering both goals in the team’s 2-1 victory. A triumphant photo of her celebrating after the second goal was a meme-worthy moment of fearlessness.

Although Rapinoe sat out Tuesday’s semifinal game on July 2 due to a hamstring injury, it was another player, Morgan, who took over the meme mantel. Scoring the go-ahead goal to lift Team USA to a 2-1 victory over England, Morgan masterfully trolled the opposition by pretending to sip tea after burying the ball in the net.

But Morgan’s boldness was on display long before that made-for-social-media moment. The soccer star has been at the forefront of the team’s effort to demand equal pay to their male counterparts. On March 8 — International Women’s Day — Morgan was the first name listed among U.S. players who filed a gender-discrimination lawsuit against the United States Soccer Federation, arguing that the organization only pays “lip service” to gender equality.

Sunday’s win certainly seems to bolster their argument. In fact, the U.S. men’s soccer team failed to even quality for the men’s World Cup last year.

New York City Mayor Bill de Blasio announced on Sunday that the city would celebrate the USWNT with a parade on Wednesday morning.

“You have inspired the entire country,” the 2020 Democratic contender said, “and New York City knows how to celebrate champions.” 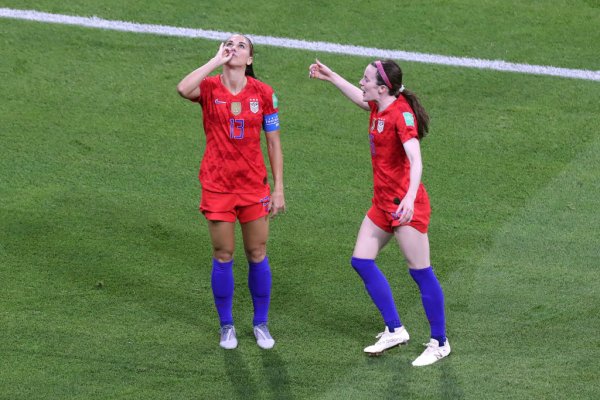