A video interview with U.S. soccer player Megan Rapinoe, in which she says she would not go to the White House if the U.S. wins the Women’s World Cup, has generated more tension between the soccer star and President Donald Trump over her protest of the National Anthem during World Cup games in France.

In the video interview, which was shot before the World Cup, Rapinoe told an Eight by Eight magazine reporter who asked if she is excited about going to the White House, “I’m not going to the f-cking White House… We’re not going to be invited.” The soccer star said she was more focused on playing well than on the opinion of her president. “We just expect to win every single game,” she said of the upcoming Women’s World Cup, quickly changing the subject.

The video, which was shot on January 25th in L.A., was taken to supplement the magazine’s Women’s World Cup special issue that came out in May. Despite its official release last week on the magazine’s Instagram, the video only began gaining traction today. Eight by Eight explained in an email that although the video was shot earlier this year, Rapinoe was referring to the upcoming World Cup when she made her statements about visiting the White House.

Trump responded to the viral video with a flurry of tweets, chastising Rapinoe and criticizing her actions, saying she “should never disrespect our Country, the White House, or our Flag.” Trump then extended an invitation to Megan and her team to the White House “win or lose.” But he also asserted that Rapinoe should “WIN first before she TALKS! Finish the job!”

Trump has been vocal about his disapproval of the soccer player’s decision to stand quietly without putting her hand over her heart while the National Anthem plays. He has voiced similar negative opinions about NFL players’ National Anthem protests in the past, even asserting that players who decided to kneel “maybe shouldn’t be in the country.”

Yet, Rapinoe continues her silent protest. She has been protesting the National Anthem in solidarity with Colin Kaepernick since 2016, only reverting to her stand-in-silence stance after the U.S. Soccer Federation banned players from kneeling. In an article titled, “Why I am Kneeling,” Rapinoe writes that she protests for the “Americans who have been lost to senseless violence” from police brutality and minority oppression.

Trump ended his tweet by saying, “The USA is doing GREAT!” 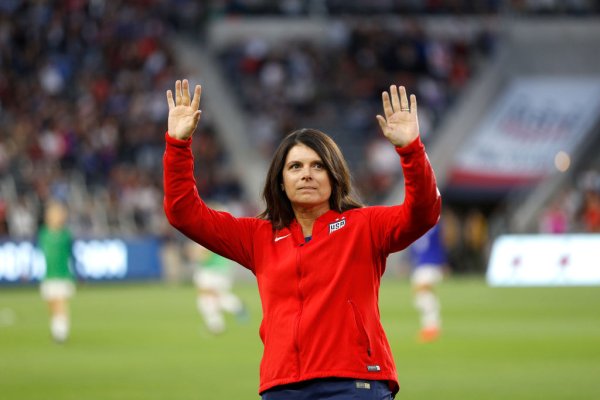 'I Applaud the Women for What They're Doing.' Mia Hamm on How to Close the Wage Gap, On and Off the Field
Next Up: Editor's Pick