'I Applaud the Women for What They're Doing.' Mia Hamm on How to Close the Wage Gap, On and Off the Field

It’s raining so hard in New York that the TV sets at a World Cup watch party in an East Village bar stop functioning during the U.S. women’s national team’s group stage match against Sweden. Soccer legend Mia Hamm — a two-time Olympic gold medalist and two-time World Cup champion — has a cocktail in hand as she anxiously awaits the livestream’s return.

“I’m so excited to watch this game today, so when I’m doing my interviews, I’ll have one eye on the game, if not both,” she had told me over the phone that morning. Thankfully, the TV connection returns in time for Hamm to watch the U.S. win.

But the 2019 FIFA Women’s World Cup — during which the U.S. team has already broken records for the most goals in a Women’s World Cup game and the highest margin of victory with a 13-0 defeat against Thailand — is about more than just the sport itself.

When 28 members of the U.S. women’s team filed a gender discrimination lawsuit against the U.S. Soccer Federation (USSF) in March, citing unequal treatment compared with the men’s team, Hamm felt a huge sense of pride, but also frustration. This was the same issue she brought up with management 20 years ago, shortly after the women’s team won the 1999 World Cup.

Renegotiating the players’ contracts ahead of the 2000 Summer Olympics, Hamm says the federation had “different standards and views of success for the women’s team as opposed to the men’s team” — a concept which she says “made no sense to us.” After a standoff that saw all the senior players on the team rejecting an initial contract offer — and boycotting a tournament in Australia — the team signed a deal, which their lawyer, John Langel, told the New York Times was fair. “We feel we reached equality,” Langel said at the time.

But today, the women’s players are still fighting for equal treatment. Though the men’s team failed to qualify for the 2018 World Cup, while the women’s team has won three titles since 1991, “USSF has utterly failed to promote gender equality,” according to the case complaint filed this March. The complaint alleges that the federation “has admitted that it pays its female player employees less than its male player employees … The USSF admits to such purposeful gender discrimination even during times when the WNT earned more profit, played more games, won more games, earned more championships, and/or garnered higher television audiences.” A spokesperson for USFF denied these allegations in an email to TIME, adding that the organization does provide “fair and equitable pay.”

Mia Hamm, #9 of the USA, kisses the World Cup Trophy after the 1999 FIFA Women's World Cup final played against China on July 10, 1999 at the Rose Bowl in Pasadena, California.
David Madison—Getty Images

Hamm is thrilled that the team, including Alex Morgan, Megan Rapinoe and Carli Lloyd, have become high-profile advocates for pay equality. “I applaud the women for what they’re doing,” Hamm says. “I support them in their stance.”

Hamm says the men’s team has historically been the priority in terms of hiring (and paying enough for) the best coaches, working on developing talent and creating more youth programs around the country. “It’s not just about closing the pay gap. It’s about overall investment in the programs,” she told the crowd on that rainy Thursday during a halftime question and answer session with Ashley Louise, the co-founder of Ladies Get Paid, a non-profit that works to close the wage gap and help women advance and succeed professionally.

Things may be looking up, though. U.S. women’s national team players can now receive salaries of around $170,000 from the federation if they also play in the National Women’s Soccer League (NWSL), which USSF helps finance. (The U.S. offers no such base pay to the men, since they can earn contracts playing in pro leagues that are far more lucrative than the NWSL. According to the federation, the men are eligible for higher per-game bonuses because the organization pays them on a per-game basis, as opposed to a salary). Women’s players from around the world have fought their federations for more equitable treatment. As social media and sports networks highlight the successes of ascendant women’s teams like Spain — home to a traditional men’s power — Hamm says this might be a turning point for global investment women’s soccer. “Imagine if they could even [give] 50 percent of what they give the men’s [teams] and young boys across the world, into the women’s game,” Hamm says.

It’s with this in mind that she’s working with Ladies Get Paid and Johnnie Walker’s equal pay initiative. The booze company has a special edition bottle of whiskey called Jane Walker, marking “the first major change of the brand’s Striding Man logo in over a century,” as part of its efforts to support women’s progress, a spokesperson for the brand told TIME. The Johnnie Walker and Ladies Get Paid partnership is hosting World Cup watch parties around the country.

Just like her 1997 “Michael vs. Mia” Gatorade commercial, where Hamm showed Michael Jordan that anything he could do, she “could do better,” Hamm wants to inspire a new generation of girls to own their power. “The movement has just started,” Hamm told the crowd, made up almost entirely of women.

As the women’s soccer team fights for pay parity, Hamm hopes to continue a broader conversation off the field. As of May 2019, women in the U.S. still make an average of 80 cents for every dollar paid to men, according to the National Partnership for Women and Families. Part of closing that wage gap will depend on encouraging women to be “advocates for themselves,” Hamm says, but also on corporations placing women in positions of power. “We need women at higher levels of leadership to be consistently in the conversation in terms of how companies and corporations want to lead,” Hamm says, adding that companies do better when they have women in executive roles.

For women in the U.S. who are currently paid less than their male counterparts — a feeling female athletes know well — Hamm says that it’s easy to feel defeated. But when in that position with USSF two decades ago, the soccer star put grievances aside to focus on the cause. “For every young girl that was sitting in the stands, [the players] wanted them to know that their value was just as great as the young boy that was there, or their brother,” she says.

Now, as a mother of two adolescent daughters and one son, gender equality is something Hamm and her husband, retired Boston Red Sox All-Star shortstop Nomar Garciaparra, work to instill in their kids. “My girls are very strong, and it’s who they are, but it’s also the environment that my husband and I are raising them in,” Hamm says. Raising their son to respect and value women is just as important to Hamm and Garciaparra, who have taught him to “view women in his life as equal and deserving and that they should be able to follow their dreams,” she says.

The U.S. is up against home team France on Friday, and the team and federation have agreed to mediate the gender discrimination lawsuit after the World Cup, which ends July 7. Hamm is excited at the prospect of the suit resulting in an agreement that gives more to the women. “That basically steps in and says, ‘Listen, we are changing the way we view the women’s game going forward,'” she says. “And it’s only gonna get bigger and better.” 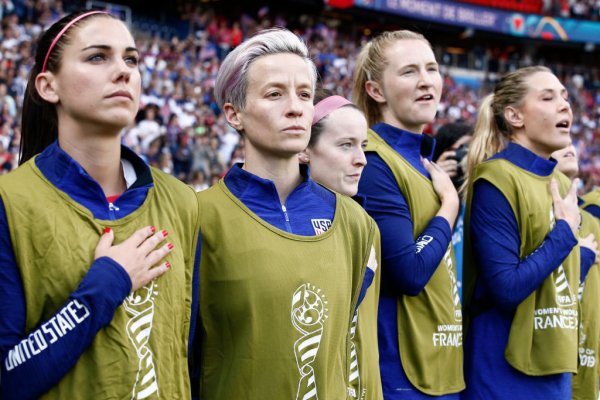 Trump Says It's Inappropriate for U.S. Soccer Star Megan Rapinoe to Protest During the National Anthem
Next Up: Editor's Pick