Mia Hamm on Why Girls Playing Sports Is So Important

Mia Hamm #9 of the United States dribbles during the women's soccer semifinal match between USA and Germany on August 23, 2004 during the Athens 2004 Summer Olympic Games at Pankritio Stadium in Heraklio, Greece.
Scott Barbour—Getty Images
By Eliana Dockterman

Mia Hamm has been a role model for girls since she established herself as one of the greatest female athletes of all time. Hamm held the record for most international goals scored by a soccer player — male or female — until 2013, when fellow American Abby Wambach broke her record. She won FIFA world player of the year twice.

Since her retirement from soccer, Hamm has been active in other pursuits: participating in an ESPN documentary about the 1999 American soccer team that won the Women’s World Cup, heading up the Mia Hamm Foundation and raising her twin daughters.

But now she’s teaming up with LeapFrog to promote the LeapBand, a fitness tracker for kids that lets them play games while staying active. Last weekend, Hamm and LeapFrog met with 400 kids and families in Santa Monica, Calif., to promote family activities. The group set three Guinness World Records for most people making sand angels (292), most people hopping on one leg (321) and most people performing a swim dance (318).

TIME caught up with Hamm to talk about controversy surrounding the upcoming Women’s World Cup, what it was like to race against Michael Jordan for a Gatorade commercial and how to get more kids to be active.

There’s been a lot of renewed interest in America in soccer after the World Cup this summer. Do you think people are going to be as invested in this upcoming Women’s World Cup as they were in the Men’s ?

I think so. I think with this World Cup what made a huge difference is that people have access that they didn’t have 10 years ago or 20 years ago. I could go home right now and find four channels that have something about soccer going on, and I definitely could not have done when I was playing. I believe Fox Sports 1 has all the coverage [of the Women’s World Cup], and they are taking it very seriously in terms of the reach that they want to obtain. In the end that’s how you get to the masses is with that type of coverage.

With regards to the U.S. team and the tournament, it’s going to be the best soccer that’s been played to this date. The game’s naturally evolving and getting better.

Some of the women’s players in the U.S. and elsewhere have expressed concerns about playing on turf for the next world cup. What are your thoughts on the turf vs. grass debate?

I would much rather play on grass. I’ve played on turf, and it is a different game. I completely understand why certain venues have turf because of the amount of play, the wear and tear, the weather. But I would love for this tournament — it’s the best of the best in the world, it’s senior players, it’s not a youth world cup — for FIFA to remain consistent, and right now that means playing the game on grass, on a natural surface.

My favorite commercial growing up was the Gatorade commercial that you did with Michael Jordan — the “Anything You Can Do I Can Do Better” commercial — and several female athletes I’ve interviewed since have cited it as an inspiration as well. You were one of the first women to send the message, “I can compete with the boys.” Were you aware that you were a female role model at the time?

Definitely. I took every opportunity as a responsibility to not only help our sport grow but also to support female athletics. I felt it was important. And it was also a way for me to say thank you to all the people that invested in me and who, whether I knew them or not, made changes to compete at this level — whether it was playing in college and the birth of Title IX and making sure that not only did I have access to being able to play in college but I had access to an education.

What was so wonderful was during the taping of that, I wanted to be better than he was at whatever we were doing. It was actually very intense. There was a natural competition. And I love the fact that he was accepting and open to that. We had a blast making it.

You’ve done a lot to encourage young girls in athletics. Why has that been an important cause for you?

I just know how it empowered me. I was a really young, shy kid who was also from a military family, so we moved every 2-3 years. And sports was an easy way to make a connection when we moved to a new base, a new town to people with similar interests. And I think it really helped give me confidence not only with that move but with feeling that I could contribute.

We’re finally starting to see more attention paid to women’s sports. Do you think we will ever reach point where there’s as much encouragement for young girls to play sports as young boys and as much interest in women’s sports as men’s?

I hope so. You just look at women in high-powered positions in top 500 companies and a lot of them will attribute their time in organized sports as something that really made a difference and had an impact in their lives. And I see the confidence it has built in my daughters when they work really hard at something, let’s say it’s soccer. They’re working really hard on passing or shooting or a certain move, and then all of the sudden it just clicks, and you just see this big smile come on their face.

And to see that confidence grow in a young girl is so important because I think boys are naturally encouraged to do those things, and the opportunities to do it for our daughters is so important.

I know that your 1999 World Cup win had a huge impact on my generation in terms of the number of girls it inspired to play soccer. But soccer’s continued to grow in popularity in the U.S. for boys and girls. Why do you think that is?

I think kids who grew up playing and it was part of their everyday lives are now parents. I would probably say if we hadn’t lived in Italy when I was 2 or 3, my dad would have been like, “What is this game? What are these kids playing?” because he didn’t grow up around it. We’re parents now, we understand the game, and our kids are playing.

I also know when I was younger, it was a relatively inexpensive sport to play. You didn’t need a lot of equipment. I was one of six kids in a military family, so it was perfect. Times have changed with club soccer and all the traveling and high-level coaching, but it’s still a sport you can play on a field used for many different sports — football, lacrosse or even the outfield of a baseball field, which is what my daughters do here in California when they play in their little AYSO league.

Obviously you and your husband [former baseball player Nomar Garciaparra] are athletic people. Have you passed those genes to your kids? What do you guys do to stay active?

We want them participating in some type of activity. And they’re motivated to be with their friends. Whether it’s dance or playing soccer or softball. At home, we want it to be fun. We’re not standing over our kids saying ‘give me ten pushups!’ Two days ago, my daughter wanted to play two square, so we put that in the space between our family room and kitchen. And we did that for 20 minutes, just laughing and I think she was talking a little trash at one point. So just having fun with them.

Why did you team up with LeapFrog?

Seventy-five percent of kids aren’t gettingthe 60 minutes a day of physical activity, whether it’s due to cutbacks in their school’s physical education programs, and you know childhood obesity rates are skyrocketing. We just really want to help families and kids understand that physical activity is not necessarily about work. LeapBand is not a calorie tracker or counter. It’s little bursts of activities like jumping in place and popping like popcorn. I know for my kids, they’re always laughing while doing it.

Have you tried any fitness trackers?

Yeah, the Nike FuelBand, I’ve used that. I was more curious: how many steps do I take in a day? I kind of had an idea of my calorie burn when I was playing, but I have no idea right now. I do a camp with a couple of my teammates, and we’ll go out and motivate each other, see what we can do. 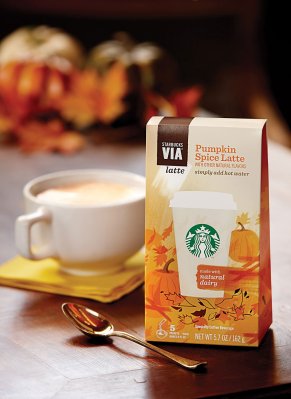 16 Drinks That Would Be Better Than a Pumpkin Spice Latte
Next Up: Editor's Pick