The U.S. women’s soccer team just beat Thailand 13 to zero in their first match of 2019’s World Cup on Tuesday, crushing several records – and reminding the internet that the team still isn’t paid as much as the U.S. men’s team.

Not only did the women’s team set a record for the highest margin of victory at a World Cup game and scored the most goals in any single Women’s World Cup match, but they have a long record of success. They won three of the last seven Women’s World Cups since the tournament was launched in 1991, including the 2015 title. They also won four gold medals since women’s soccer became an Olympic sport in 2016.

However, for many people Tuesday’s victory served as a stinging reminder that members of the team are being paid much less than similarly situated members of the men’s team.

On March 8, 28 members of the U.S. women’s soccer team filed a lawsuit against U.S. soccer, accusing it of gender discrimination. The lawsuit has alleged that the organization has given “only lip service to gender equality.”

After the team’s win, many people, including presidential candidates Sen. Kirsten Gillibrand and Sen. Elizabeth Warren, argued on Twitter that women had made their case through that single game.

After the team’s victory, many people pointed out that the women scored more goals in that single game than the men’s team during their last two World Cup tournaments combined. That would be three men’s World Cups, if you include the 2018 tournament where the men failed to qualify.

The U.S. men’s players association released a statement in March to say that they “fully support” the women’s efforts to win equal pay. 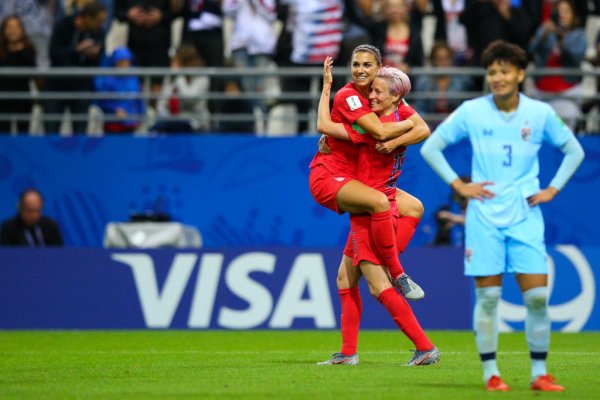 U.S. Women's National Soccer Team Just Scored the Most Goals Ever in a Women's World Cup Match
Next Up: Editor's Pick