'It's Not a Fight About Money.' Why Bankers and Entrepreneurs Have a Stake in Hong Kong's Protests

Conrad Wu is a serial entrepreneur. He rarely takes a day off or a vacation. His days and nights are spent working on a transportation app he started in 2013, a car washing service app he co-founded in 2015, and brainstorming ideas for new businesses.

What little spare time the 38-year-old has is often spent driving for Uber in Hong Kong, where he was born and lives. He has a daughter and an ailing mother at home, whose medical bills he helps pay.

Despite the financial pressures of supporting a family while starting a business, Wu didn’t hesitate to put his company, Call4Van, on strike last month to protest against a now suspended extradition bill. The proposed law would have, for the first time, allowed suspected criminals to be sent to the mainland to face trial under China’s opaque and arbitrary legal system. Extradition could have been sought for anyone accused of one of 37 categories of crime—and not just locals. Expatriates working in the city, even executives simply transiting through its airport, could find themselves detained.

Call4Van was one of more than 100 companies in Hong Kong that went on strike in June to “defend freedom,” as Wu put it. Others included coffee shops and retail stores.

“Losing money in a short period of time is minuscule considering the potential impact of the law if it gets passed,” Wu told TIME. “Local businesses, and even the entire economy, would be badly impacted.”

The Hong Kong protesters flooding the city over the past month have grabbed international headlines. Many of those crowding the streets are young student activists. But the extradition law has galvanized opposition from all sectors of society. Elderly men and women in wheelchairs were pushed along the routes of several marches, moving alongside parents who brought young children with them. Teachers, religious groups, and stay-at-home moms joined in the demonstrations—as have lawyers, bankers, business owners and other professionals in an impressive show of unity.

Read More: Why Hong Kong Protesters Aren’t Calling It Quits After the Suspension of a Controversial Extradition Bill

Dickson, a Hong Kong banker, was among those fighting against the proposed legislation. He could see protesters gathering a few weeks ago from the window of his office building, which houses several hedge funds and banks, in Hong Kong’s financial district. He might have looked slightly out of place joining the protests in a business shirt and slacks, but that didn’t stop him.

“I went down during lunchtime for about two hours. I really wanted to get out there, but it was a work day,” Dickson, 30, told TIME about a weekday protest he took part in recently. Several of his colleagues spent their lunch breaks protesting too. “I can only imagine the impact if it’s passed. A lot of clients might start banking in and bankers might move to Singapore.” (Several of Hong Kong’s tycoons have already started moving money overseas, according to Reuters.)

Kay, a 32-year-old investment banker at a large international bank, has joined every protest she can—although she has grueling work hours and is often stuck in the office too late to join a rally. But she’s found other ways to express her views. Using skills honed in her corporate job, she helped write the ads that activists took out in international newspapers ahead of the G20 Summit in late June to bring attention to their plight. She’s also been involved in a few fundraising campaigns.

The former British colony was built on business. From its notorious, 19th century beginnings as a opium port, trade transformed Hong Kong into a city of taipans, as business magnates are called. Today, Hong Kong is a mecca for dealmakers, who flock to the financial hub from around the world for jobs and business opportunities. Business savviness runs deep in the veins of Hongkongers, who are obsessive players of stocks and real estate. Innumerable skyscrapers bearing the logos of large multinational corporations shine and sparkle across the city’s impressive skyline.

Although it was retroceded to China in 1997, Hong Kong was promised a high degree of autonomy, and its independent judiciary and strong rule of law are important driving factors for the enclave’s ranking as the number one jurisdiction in the world for economic freedom, and the third most competitive financial center in the world, after New York and London. Its stock market overtook Japan’s to become the world’s third most valuable in the world in April.

Residents therefore have good reason to be worried about Beijing’s encroachment—especially the threat of extradition. The Hong Kong government excluded political offenses from the list of extraditable crimes, but nobody in Hong Kong was mollified because Beijing notoriously uses trumped up criminal charges—such as “picking quarrels and provoking trouble“—to silence dissenters.

“People are concerned about whether it means opening gaps in the wall between the mainland Chinese legal system and the Hong Kong legal system” Kevin Yam, a financial regulatory lawyer based in Hong Kong, told TIME.

A businessman walks along Harcourt Road during a demonstration in Hong Kong, China, on Friday, June 21, 2019.
Justin Chin/Bloomberg via Getty Images

‘Hong Kong will lose some of its appeal’

Facing widespread opposition and some of the largest protests the city has ever seen, Hong Kong’s top official, Chief Executive Carrie Lam, suspended the extradition bill on June 15.

So far, the debacle over the legislation and the ensuing protests have inflicted minimal damage on businesses in the city. “The day-to-day impact on businesses is very much business continuity, accessibility to their offices,” Grant Strudwick, vice president at risk management firm Pinkerton, told TIME. But companies “are starting to review their longer-term outlook.”

Although Lam says the bill is “dead,” she has not formally withdrawn it. Many believe its revival at some later stage would spell disaster for Hong Kong’s economy.

“Hong Kong will lose some of its appeal—for mainland Chinese people trying to put some assets off shore, for foreign people and companies setting up shop in Hong Kong, and for local Hong Kong people and businesses,” Will Denyer, an economist at Hong Kong-based Gavekal Research, tells TIME. He says implementation of the bill could disrupt everything from international trade and investment to technology sharing.

The entrepôt has historically played an important role in China’s development by serving as a gateway between China and the rest of the world, with goods and capital flowing through. Admittedly, that importance has declined—in the mid-1990s, Hong Kong’s economy accounted for just under a third of China’s GDP compared to less than 3% today—but a huge portion of the foreign direct investment into China is still funneled through Hong Kong.

The city’s developed financial markets are used by the mainland as a testing ground for products to open its own—like the Shanghai and Bond Connect programs, which have launched in the last few years. Hong Kong also acts as a hub for internationalization of China’s currency, the renminbi. Even more importantly, Hong Kong’s own stock market, widely traded into by foreign investors, is a vital portal through which mainland companies can raise capital. At the end of 2018, 1,146 mainland companies were listed in Hong Kong, with market capitalization of $2.6 trillion. Shanghai doesn’t compare. Although the Chinese government set a 2020 deadline to make Shanghai a global financial center, capital controls and over-regulation have stymied its appeal.

As a finance, transportation, trade and aviation hub, China’s wayward enclave is meanwhile earmarked for a lynch pin role in the economic development of the co-called “Greater Bay Area”—an investment and infrastructural zone of 11 cities that Beijing hopes will rival Silicon Valley. And Hong Kong’s stock exchange may be more important than ever for China if the trade war between the U.S. and China can’t be resolved by further talks.

“The reality is that Hong Kong has been seen as a backup to New York as a place for Chinese companies to list if the trade war escalates,” regulatory lawyer Yam says.

Anecdotal evidence supports the theory that mainland companies may be growing wary of U.S. listings. It is widely reported that tech-giant Alibaba, the largest Chinese company listed in the U.S., is considering a secondary listing in Hong Kong, and China’s largest semiconductor manufacturer recently announced its delisting from the New York Stock exchange, although it cited low trading volumes and high costs of maintaining the listing.

“Tariffs can only go so far,” David Webb, a former investment banker who now runs a financial and corporate governance analysis website, told TIME. Trump “could quite reasonably argue that if the mainland government is subsidizing and protecting its state-controlled enterprises, then why is it that we’ve got American money invested in them?”

In fact, the U.S. government is already taking steps to tighten control over Chinese companies listed on U.S. exchanges. In early June, a U.S Congressional committee introduced a bill that would subject Chinese companies listed in the U.S. to more stringent financial reporting requirements. Beijing has challenged U.S. reporting requirements for its companies in the past, citing national security. But if the bill becomes law, companies who do not comply will be forced to de-list.

There’s a lot of money at stake. At the end of 2018, 156 Chinese companies (at least 11 of those are state-owned enterprises) were listed on major U.S. exchanges with a total market capitalization of $1.2 trillion. If Chinese companies face obstacles listing in the U.S., they may need Hong Kong’s stock market.

That’s assuming, of course, that Beijing will continue to prioritize economic gain over politics. Some observers think it won’t. President Xi Jinping’s obsession with national unity is so strong, Webb suggests, that he will curtail Hong Kong’s freedoms if he needs to—”even if that means losing international recognition for Hong Kong as a separate jurisdiction.”

For the activists—and bankers—on the ground, that possibility makes Hong Kong’s struggle for greater freedoms even more pressing. “It’s not a fight about money,” says investment banker Kay. “It’s a fight about values and ideology.” 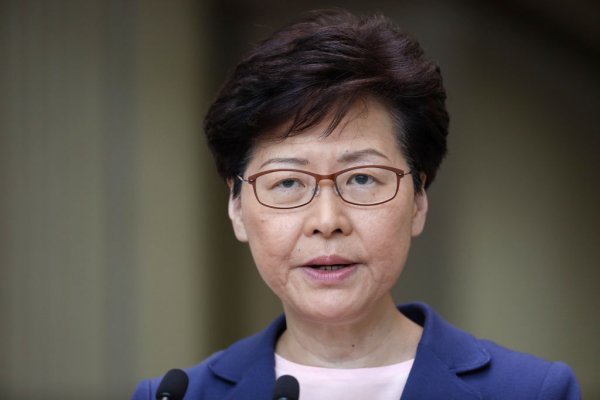