Nicole Curran, the wife of the Golden State Warriors owner Joe Lacob, revealed what she said to Jay-Z in a moment during Game 3 of the NBA Finals that set off a frenzy on social media.

In the clip, shared by ESPN, Curran can be seen leaning over Beyoncé, who is sitting in between Jay-Z and Curran. At the exact moment, Beyoncé’s grin turns into something more like a scowl.

The video went viral, with Beyoncé fans taking to social media to defend Queen Bey, who they said looked less than thrilled.

Ramona Shelburne, a senior writer at ESPN, said on Twitter that she had spoken to Curran, who was very upset over the incident. Curran told Shelburne that she had no idea the moment had caused controversy until she got home and realized she’d been getting online death threats.

She said that she asked the power couple, who she had invited to the game, if they wanted drinks.

Beyoncé asked for a water, and Jay-Z asked for a vodka soda, so Curran says because it was loud in the arena she leaned over to ask Jay-Z if he wanted lime in his drink, according to Shelburne.

Read More: It’s a Big Day for the Beyhive. Beyoncé Just Dropped an Album and a Netflix Movie

Curran told Shelburne that she got the pair the drinks they had requested. “There was no hostility. I was trying to be a good hostess,” she said. “I’ve never experienced cyber bullying like this. I can’t believe our players go through this. That kids go through this.“ 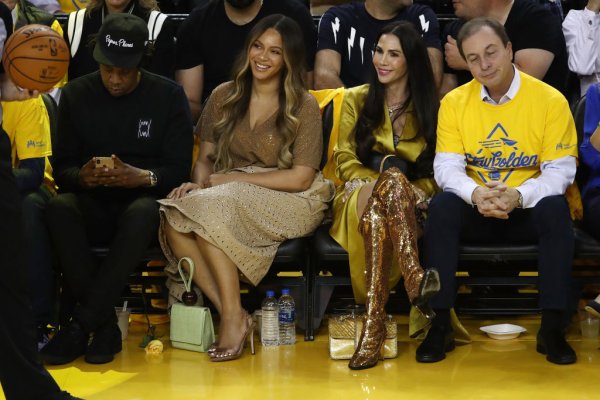 A Clip of Beyonce's Candid Courtside Moment Is Reverberating Across the Internet
Next Up: Editor's Pick