The Toronto Raptors Respond to Stephen Curry's Onslaught, Over and Over

Curry, who scored his postseason career high of 47 points, hit a 32-foot pull-up jumper late in the first quarter to cut a lead to four. Danny Green, whose playoff shooting struggles led earnest Raptors fans to stop him in the street and encourage him to keep firing away, countered with a three of his own. Curry sunk a fourth quarter shot to trim the lead to 11. Toronto’s Kyle Lowry, an All-Star who’s played, according to his critics, an all-too second fiddle to Kawhi Leonard, did one better, with a step back three from deep to push it back to 14. Curry hit three free throws to make it a seven point game in the fourth. Toronto big man Serge Ibaka took a deep two—the most inefficient shot in basketball—and nailed it, rendering it plenty efficient, and giving Toronto more of a cushion.

Every Raptor on the court, it seemed, had an answer for Curry. A Curry steal and two foul shots cut Toronto’s lead to 10 with over three minutes left, which was striking distance for the Warriors, given their three-point prowess. Marc Gasol, however, took the air out of Oracle with a spinning turnaround hook that kind of looked like horse-bleep, but fell. A few minutes later, Fred VanVleet provided the final blow—he launched a three over Draymond Green, like a little kid tossing a prayer against his brother in driveway one-on-one. Swish. Toronto’s lead increased to 15 points with just over 90 seconds left. Golden State coach Steve Kerr called time out and cleared the bench.

Every time a Raptor saw a teammate make a timely bucket, he was inspired to do the same. “When you see shots go in, it could be contagious,” says Danny Green, who finished 6 for 10 from three-point range, taking the fan advice to keep shooting to heart. “Luckily it was tonight.”

Toronto’s 123-109 win over Golden State leaves the Raptors just two victories away from Canada’s first-ever NBA championship. Golden State needs Kevin Durant, who hasn’t played since May 8 because of a calf injury, and Klay Thompson, who missed Game 3 because of a hamstring strain he suffered in Game 2 of the NBA Finals, to heal fast. Without two future Hall of Famers, Curry had to bear too much of the scoring load, sort of like how LeBron James was forced to carry the undermanned Cleveland Cavaliers in the 2015 and 2018 Finals. The Cavs lost both those series.

Leonard led Toronto with 30 points, but Lowry’s offensive reemergence—he finished with 23 points on five threes—is particularly concerning for Golden State. Before the game, someone wrote “Let It Rip” on a board in the Toronto locker room. Lowry told Toronto coach Nick Nurse that he’d honor that directive. Nurse had wondered if Lowry wrote the message. “I don’t know who the f–k did it,” says Lowry. “I don’t even care. That was our team’s motto tonight, be aggressive. My job was to score a little bit more.”

Ibaka’s job, meanwhile, was to stuff every Golden State shot out of the sky. Ibaka finished with six rejections in just 22 minutes of action. His performance sent a message: Golden State needs to think twice before driving to the basket. When asked which swat was the most important, Ibaka couldn’t quite answer. “I don’t remember,” says Ibaka. “I had so many.”

We should all have such problems.

After the Warriors swept the Portland Trail Blazers in the Western Conference Finals, without Durant, many pundits thought their fourth title in five years was a mere formality. That’s no longer the case, especially with these new injuries to Thompson and the effective, under-appreciated big man Kevon Looney, who suffered a chest contusion in Game 2 and is out for the rest of the finals. Still, the Warriors know they’re generating little sympathy. “No one cares if guys are hurt,” says Draymond Green. “Everybody wants to see us lose. So I’m sure people are happy they’re hurt.”

The fun needs to start soon. 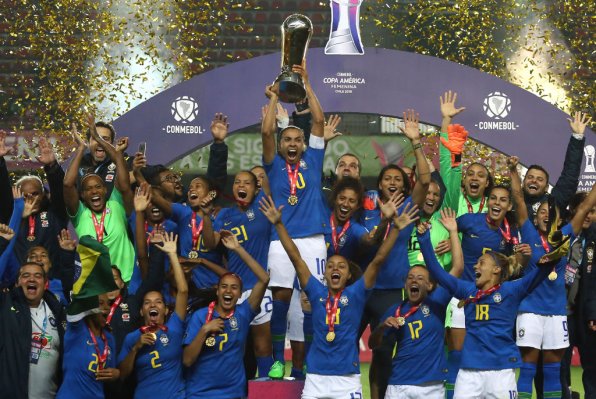 5 Big Stories to Watch in the Women's World Cup
Next Up: Editor's Pick