It wasn’t the Toronto Raptors’ defiant win over the Golden State Warriors that caused the biggest stir on the internet Wednesday night, but rather the power couple who sat courtside and spawned a meme.

Beyoncé and Jay-Z supported Golden State during Game 3 of the NBA Finals at Oracle Arena in Oakland, Calif., waving and cheering for the cameras, before ESPN showed a moment that Beyoncé fans simply could not get over.

The duo sat next to Warriors owner Jacob Lacob and his wife, Nicole Curran, at the game. In the clip ESPN shared, Curran leaned over Beyoncé to chat with Jay-Z. Though no parties involved have commented on the interaction, that didn’t stop Beyoncé’s avid fan base from coming out to play on Twitter, where people couldn’t help but characterize Beyoncé’s facial expression as less than thrilled with the moment.

The moment even made some “Lemonade” fans think of “Becky with the good hair.”

There’s really a lot of action on the sidelines this season. It’s a departure from the hip-hop and basketball convergent news of the week, which saw Toronto native Drake doing what he does best, trolling from the sidelines during the previous games in the series. 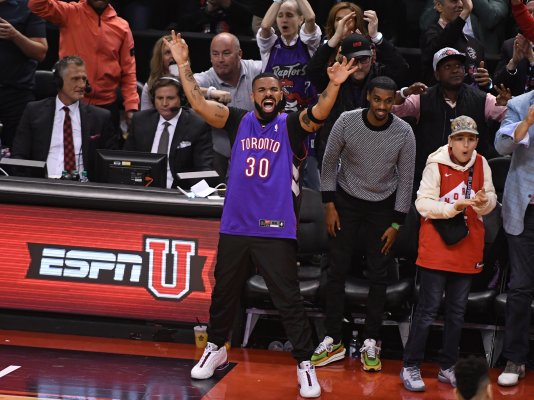 Drake the MVP of Trolling Steals the Show From the Sidelines of the 2019 NBA Finals
Next Up: Editor's Pick