Both Jimmy Kimmel and Stephen Colbert took President Donald Trump’s latest criticisms of late-night TV shows personally, it seems, as both hosts addressed Trump’s comments during their own broadcasts on Wednesday night.

In tweets sent out on Wednesday, Trump called late night shows “very boring” with “one-sided” comedy and “one-sided hatred” directed towards him, referencing a Jay Leno quote spun on Fox and Friends in his comments and calling the shows “unwatchable.”

Kimmel’s response? “What a snowflake.” He also explained what Leno was referring to in an earlier interview, comparing Leno’s time with late-night to the contemporary TV landscape. “I don’t want to talk about Donald Trump every night. None of us do,” Kimmel continued. Then he outlined the many things Trump had already done that day that were newsworthy, from the Manafort sentencing to his address of the Melania body-double conspiracy theory. “Am I not supposed to mention that?” Kimmel joked. “You stop being terrible, we’ll stop pointing it out.”

Colbert had a slightly different take. “The comedy I do is not one-sided. I can make fun of the President from every angle,” he said, pointedly making good use of his many in-studio cameras. As to Trump’s tweeted assertion that he is “number one?” Colbert had a correction to make: “Actually we are number one, The Late Show,” he said of his own show, which has been battling it out in the ratings.

Looks like the late night hosts aren’t at all done with their “one-sided” approach to Trump yet. 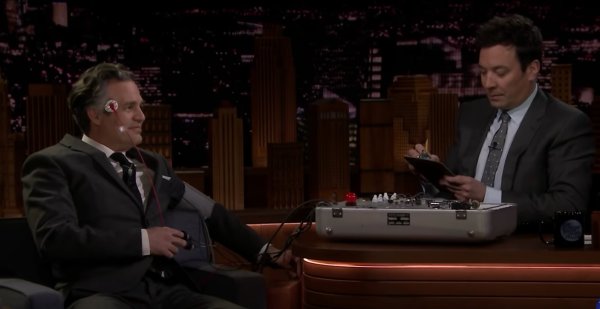 Jimmy Fallon Hooked Mark Ruffalo Up to a Lie Detector to Get Avengers Spoilers
Next Up: Editor's Pick