Special counsel Robert Mueller leaves after a closed meeting with members of the Senate Judiciary Committee on June 21, 2017, in Washington, D.C.
Alex Wong—Getty Images
Ideas
By Renato Mariotti
Mariotti, a former federal prosecutor, is a practicing lawyer and the host of the On Topic podcast.

After endless hype, special counsel Robert Mueller may be about to submit his report. It is impossible to know what his conclusions will be. But after so much speculation, one outcome seems likely: Mueller will disappoint just about everyone — especially President Trump’s critics. And it won’t be his fault.

This is due in part to Trump’s successful disinformation crusade, which has worked to raise a nearly impossible and definitely illogical bar for Mueller to clear: proving “collusion” and charging a grand criminal conspiracy involving the Trump campaign and the Russian government. But it is also due to Trump’s critics, who have responded to Trump’s “No collusion!” mantra by shouting back, “Yes, collusion!”

The word collusion appears nowhere in the order authorizing Mueller’s investigation. There is not even a relevant crime called “collusion.” What Mueller is tasked with is investigating “any links and/or coordination between the Russian government and individuals associated with” the Trump campaign.

If “links and/or coordination” also don’t sound like crimes, that’s because they aren’t. While Mueller is directed to charge and prosecute crimes he discovers, his is primarily a counterintelligence investigation — not a criminal one — the purpose of which is to identify threats to our national security, potentially including the President of the United States and his associates.

Mueller’s investigation is already successful. He has laid bare connections between key members of Trump’s campaign and Russian operatives, including the recent revelation that former Trump campaign chair Paul Manafort allegedly shared internal polling data with Konstantin Kilimnik, who Mueller has alleged is a former Russian intelligence officer. Along the way, Mueller has charged 34 people and three companies with committing serious crimes.

But all the while, partisans and legal analysts on TV and Twitter have inflated expectations for the investigation. For instance, after former Trump lawyer Michael Cohen pleaded guilty to lying to Congress, one analyst, whom I respect, tweeted that Mueller is “preparing to lay down a royal flush.” To some members of the public, that could be interpreted to mean we can be confident Mueller will prove that Trump conspired with Moscow — something we cannot yet know. Even when Mueller obtained significant guilty pleas, people focused on what could be next — instead of the perhaps truer threats to the Trump presidency, like the campaign-finance crimes discussed at length by Cohen in court filings and his Feb. 27 testimony. This feeds into the seemingly insatiable public desire not for what has happened but for what could happen.

While there can be value in explaining potential outcomes, speculation about what Mueller could do has so far exceeded even his substantial accomplishments — and some developments suggest Mueller’s investigation may not prove a grand conspiracy.

For example, Mueller’s sentencing memorandum for Manafort, released on Feb. 23, contained no new revelations, and relatively little material was redacted. Yet Mueller is obligated to make the judge aware of all of Manafort’s “history and characteristics” that could be relevant at sentencing; if Mueller was sitting on a mountain of additional evidence against Manafort, he needed to tell the judge. Similarly, Mueller did not charge informal Trump adviser Roger Stone with conspiracy, which indicates he did not have sufficient evidence to do so when Stone was arrested in January.

There are other, broader reasons it appears unlikely that Mueller will charge a grand conspiracy. One is that it is not easy to prove guilt beyond a reasonable doubt, particularly for white collar crimes that require prosecutors to prove a defendant’s intent. Another is that federal sentencing law also gives prosecutors incentives to charge narrow crimes that are easier to prove.

Mueller’s report in fact could change very little. If Senate Republicans stand firm behind Trump, he will remain in office and the public will be left to speculate about the result of the many ongoing investigations of Trump’s campaign, his businesses and his Inaugural committee for years to come, as federal prosecutors investigate. Current Attorney General William Barr may be required by law not to release certain portions of the report or may try to hide the bulk of it from the public, though the latter seems just about politically impossible now.

We do not know what Mueller will do. But especially given these indicators and constraints, any outsize expectations seem misguided. And despite being fueled by Trump’s critics, they will make it easier for Trump to declare a win even if there is compelling evidence he committed crimes.

Trump has obstructed justice before our very eyes, from the firing of then FBI Director James Comey to the public pressure he put on now former Attorney General Jeff Sessions to resign after recusing himself, among many other examples. The public’s obsession with crimes that may never be charged has taken the focus away from that serious offense (which, for what it’s worth, is arguably a form of “collusion”).

As the Mueller investigation ends and, ideally, becomes public, it is an opportunity to refocus on what has actually happened: Trump campaign officials have committed crimes, the President has obstructed justice in plain sight, and Trump has been implicated in breaking campaign-finance law. At last, we can address reality instead of what may be fantasy. 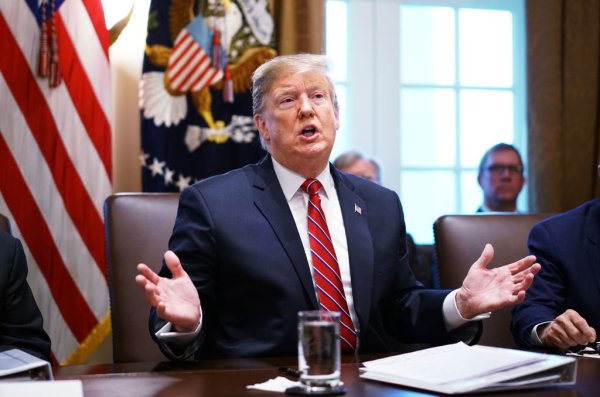 The President Has Been Implicated in a Crime. Statutes of Limitations Should Not Save Him
Next Up: Editor's Pick