Meghan Markle, the Duchess of Sussex, made a major royal style statement when she changed her outfit not just once, but five times over the course of 24 hours, selecting designs from many different fashion houses, including Givenchy, Dior, and Emilia Wickstead, a favorite designer of Markle’s sister-in-law, Kate Middleton, the Duchess of Cambridge.

The Duchess began her day in a bespoke Dior little black dress that drew comparisons to her elegant white Givenchy wedding gown, due to its bateau neckline, fitted waist, and flared skirt. Markle wore the ensemble with nude heels and a matching black fascinator for programming to honor the 100th anniversary of the Royal Air Force.

Following the programming for the Royal Air Force, Markle changed into a forest green pencil skirt and sweater combo by Givenchy to arrive in Dublin, Ireland. She paired the ensemble with another pair of suede pumps and a sleek and structured cognac Strathberry tote.

Later that day, the Duchess changed into a belted black cocktail dress by designer Emilia Wickstead for a reception at the British Embassy in Dublin. Wickstead is a favorite designer of Kate Middleton, but this is one of the first times that Markle has worn of her designs for a public appearance after becoming a royal. She paired the elegant dress with a pair of strappy black pumps and a small black clutch purse.

DUBLIN, IRELAND - JULY 10: Prince Harry, Duke of Sussex and Meghan, Duchess of Sussex attend a reception at Glencairn, the residence of Robin Barnett, the British Ambassador to Ireland during day one of their visit to Ireland on July 10, 2018 in Dublin, Ireland. (Photo by Geoff Pugh - WPA Pool/Getty Images)
WPA Pool—Getty Images

To meet with President Michael Higgins the next day, the Duchess sported a fitted Roland Mouret sheath dress with a ruffle embellishment on the skirt and the bateau neckline she appears to favor. She paired the look with a black handbag and a pair of simple black pumps.

Rounding out her 24 hours, the Duchess then changed into a menswear look for an appearance at sporting arena Croke Park, which could be a subtle nod to her former role on the small screen – a sleek black Givenchy suit, with a sporty cropped jacket that she paired with a white tee shirt, a belt, black pumps, and a black clutch. 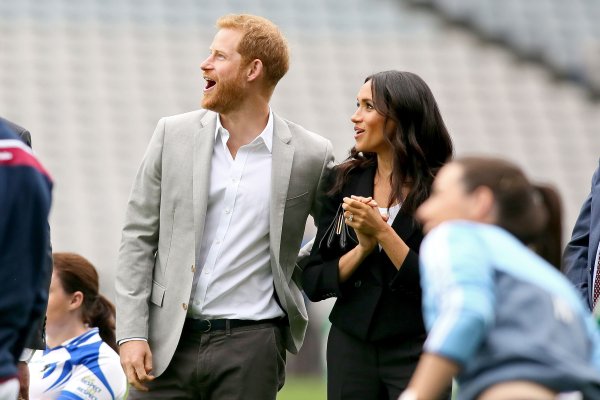 Meghan Markle Is Now a Hurling Spectator. What's Hurling?
Next Up: Editor's Pick