'This Is the New Normal Unless We Stop It.' Teachers Are Fighting for Gun Control After Parkland

Deb Ciamacca has spent a lot of time thinking about how she would protect her students if there were a shooting at her high school. Before she was an AP government teacher, she was a U.S. Marine. As she hears about one school shooting after another, she can’t help thinking about school safety like combat.

“I could say that when I was in the military: Would I take a bullet for the guys who worked for me? Yeah, I would. And I would do it here too,” said Ciamacca, a teacher at Conestoga High School in Berwyn, Pennsylvania. “The outrageous part of this here is that we’ve even having this conversation — that we’re even having a conversation about teachers taking a bullet.”

That conversation has been happening for 19 years, stretching back to the shooting at Columbine High School, where 12 students and one teacher were killed. It includes the 2012 shooting at Sandy Hook Elementary School, which left 20 students and six educators dead.

But for many teachers, the shooting last week at Marjory Stoneman Douglas High School in Parkland, Florida — where 17 people were killed — feels like a tipping point. It has moved them to be more vocal about demanding action to prevent school shootings. They are following the lead of their students and the teenage survivors in Parkland who have emerged as relentlessly vocal advocates for gun control legislation

Ciamacca would like to see a holistic approach to stopping school violence, including a combination of more school counselors, the use of metal detectors in schools and restricted access to assault weapons.

Teachers in other states and school districts say they have seen in Marjory Stoneman Douglas a school similar to their own — with a lockdown protocol and safety measures in place — and teachers just like themselves who were placed in an impossible situation. They have been moved by the videos and photos shared on social media from within Marjory Stoneman Douglas as the shooting unfolded and by the impassioned calls for action delivered by students after the violence.

“What happened in Florida is the straw that broke the camel’s back, and I think it has awakened educators and parents and students all over the United States that these are not going to become unusual activities anymore. This is going to be the new normal unless we stop it,” said Carol Burris, executive director of the advocacy group Network for Public Education, which is organizing a day of action to stop gun violence, calling on teachers and students to participate in walk-outs, teach-ins or other events on April 20, the anniversary of the shooting at Columbine High School. Burris, a retired teacher and former high school principal, said the group has not weighed in on gun control issues before, but she thinks that’s no longer an option.

“There’s something about this one — I think really, honestly, it was about the video and photos and social media posts that the kids made in real time, as it was happening, that just rocked me,” said Steve Laredo, a history teacher at Nantucket High School in Massachusetts. “It just feels different. I think we’re at a tipping point.”

Laredo said he hasn’t been very politically active in the past, in part because he has been careful to moderate his views in his public school classroom. But he has felt moved to act since the Parkland shooting. “I came into school last week on Thursday and I was just astounded, and I was kind of ping-ponging between despair and rage,” he said. “I was so angry, not just that it happened, but about having nothing to say to them that wasn’t just the same old bullshit.”

Laredo said he’s following the lead of students at his school, and he plans to participate in the protests and marches that they organize, including a possible bus trip to Washington D.C. for the March for Our Lives on March 24.

Marla Kilfoyle — a high school teacher on Long Island, New York and the executive director of the Badass Teachers Association, an activist group — has been inundated this week with messages from teachers saying, “I’m sick of this, I need to do something, I can’t be quiet anymore,” she said. Kilfoyle is encouraging members of the association to send emails to lawmakers demanding gun control legislation.

Randi Weingarten, president of the American Federation of Teachers, has seen educators become vocal about more traditional education policy issues before, including standardized testing and school choice. “But this notion — of Sandy Hook, Stoneman Douglas, Columbine, of mass murder at schools — is something that hits every single teacher in a way that nothing else does because we want to keep our kids safe, and we want to be safe,” she said.

After the Parkland shooting, Republican lawmakers in Wisconsin, Alabama and North Carolina have proposed arming teachers or permitting people to carry concealed weapons in schools — a suggestion that Democrats and many educators have met with skepticism and concern. During a listening session with shooting survivors and family members at the White House on Wednesday, President Trump said his administration would look “strongly” into policies that would arm teachers. “If you had a teacher who was adept at firearms, they could very well end the attack very quickly,” Trump said.

But Ciamacca, a former Marine Corps captain, has no interest in carrying a weapon in her classroom. “It’s an insane idea. To anyone who’s ever taught before, it’s just ludicrous,” she said.

Ciamacca, Laredo and several other teachers have referenced the words of Marjory Stoneman Douglas senior Emma González, who delivered a powerful speech at a rally on Saturday written on the back of notes for her AP government class.

Ciamacca said González’s speech hit home for her AP government students — and for her.

“I always say to my kids, it’s about being engaged, and it’s about showing people that you’re a citizen, and citizens take action. Citizens don’t sit back and wait. Government is not a spectator sport,” she said. “What kind of teacher would I be if I preach this, but then I do nothing? I have to take a lead.” 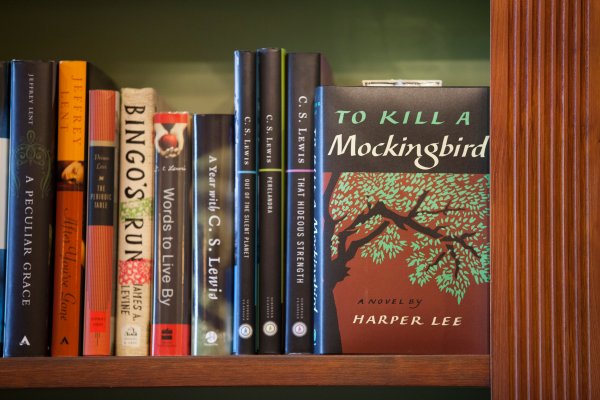